The 4-4 Point Low Approach (aka. Small Knight Approach or Keima Kakari) is one of the most common (~85% frequency[1]) and popular 4-4 point Joseki, and it is a basic move that is played at all skill levels. The small knight approach is flexible and threatens to enter the corner or extend along the side. It is typically played when the player hopes to settle a position, sketch a loose framework, deny an extension/enclosure, acquire territory, or develop a moyo in one direction of the board.

Compared with other star point approach joseki, professionals and strong AI programs regard the knight's move as the main star point side approach that obtains the best local result for White. Other side approach moves result in a slight local loss for White, and they are seldom played except in specific global board positions.

Popular joseki related to this position have evolved over the centuries. Some of the patterns listed in this reference are no longer considered "joseki", but the viability of unusual moves is highly sensitive to the surrounding board position. The difference in winning rate between traditional and modern joseki is often less than a point, so many old joseki are still valid and playable particularly at the amateur level. Although traditional beginner joseki like the 4-4 Point Slide Joseki are now largely obsolete among professionals ever since the AI revolution, it is still a very good, balanced, and simple joseki for beginners.

Responses to the small knight approach can be classified into: local extensions, tenuki, pincers, kick, and contact play. 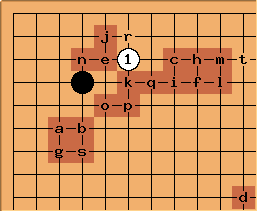 Local extensions along the side are a territorial and solid response to the low approach. It defends the star point from getting double approached (potentially resulting in a weak group), solidifies a base, and is very efficient. The small knight extension is one of the most reliable responses in modern go and is frequently well-regarded by professionals and AI programs. The local extension places more emphasis on the side of the board than the corner, often allowing White to share or even jump into the corner, but Black is often able to gain more than White in the process.

Modern go emphasizes territory and sente, so the small knight extension and tenuki are the most popular choices among professionals and strong AI programs.

Strong AI programs often opt to approach or enclose an open 3-4 point or perform a 3-3 invasion instead of answering a 4-4 point approach, as these moves are slightly bigger than defending a star point approach. In exchange, the player must be willing to take a double approach, fight, and handle a potentially complicated situation.

Pincers are typically played when a player wishes to develop a position along the upper side or deny their opponent from establishing a position on the side. In exchange, the corner is left often, and White may opt to invade the 3-3 point or approach from the opposite side. 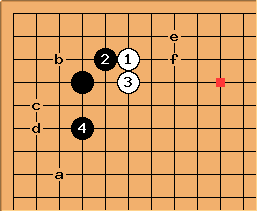 The 4-4 point kick joseki is a well-known joseki that classically appears in handicap games, and it is often an early joseki that beginners learn. Despite its apparent simplicity, is has significant weaknesses for Black (a-d) and traditional dogma before the AI era was that this joseki was bad for Black unless an additional Black pincer stone is already present at the marked square.

The AI revolution has challenged this dogma, and the kick is well-regarded by the strong AI programs in many situations (B+0.2 [2]) even without a pincer stone. Since 2016, the kick joseki now sees widespread use in professional play (~7% [1]).

The kick joseki is greedy and sente, and forces a response from White. Black insists on taking as much of the corner as possible, but leaves many weaknesses (aji) behind in the process. It is difficult for Black to efficiently fix those weaknesses in sente, and White will often have an opportunity to invade later in the game.

Attaching on top of the approach stone is a situational move that has evolved extensively over the centuries, and its popularity has waxed and waned from era to era (~2%) [1]. There are many traditional and AI variations, and several joseki involve cutting points, cross-cuts, tesuji, or potential ladders.

The attachment can be viewed as a situational move that is effective at enlarging the left/central side moyo while taking the corner and flattening the side. Certain variations may involve trick plays or overconcentration, so it is common in handicap games. One major limitation of this joseki is that White typically gains a strong position as a result of the joseki, whereas Black is left with potential cutting points and significant aji. If Black invests a move to protect their weaknesses or place an extension, many variations of this joseki end in gote for Black.

These moves are atypical responses, but have seen play in professional games in special situations or as a form of special strategy.

When and where to pincer?

Is the kick joseki bad? 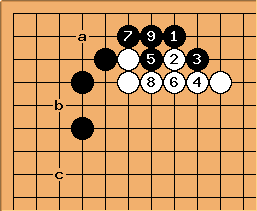 Historically, the kick joseki was viewed as "not joseki" unless a pincer stone was already present, and usage of the kick would be criticized by go teachers. It was primarily considered a handicap joseki for beginners, since White's position is settled with an "ideal" extension whereas Black's corner is weak. Ever since the 2016 AI revolution, the kick joseki has risen considerably in popularity among professionals because strong AI programs like AlphaGo evaluate the joseki favorably.

The kick joseki has significant weaknesses and potential invasion points, and the corner territory is not secure. It can be viewed as a greedy, and it has a potential chance (not guaranteed) to claim more territory than other joseki that divide the corner between both players. Modern strong AI programs favor corner territory and sente, which could explain why AI programs view the kick joseki more favorably. The kick is a forcing move that generally demands a response, whereas the small knight extension is not necessarily sente, and the opponent may choose to tenuki. The AI revolution has reaffirmed notions that the corner is most valuable (see: "Corners, then sides, then center" and "Corner is gold, side is silver, center is grass"), and the capacity to efficiently develop territory in the corner without spending many moves is well-regarded by AI programs. By corollary, AI attaches less value to the sides than traditional human players.

to be a reasonable (sometimes even the best) move right after the classic joseki. A common AI sequence that might arise is depicted, and the

stone eliminates much of the danger of a 3-3 invasion.

AI programs and professionals strongly value sente, so Black may not opt to play this gote continuation immediately. However, it is worthwhile to note that AI programs view this immediate territorial continuation to be nearly equivalent in value with tenuki and AI's favorite 3-3 invasion of undefended corners in the opening of a game. Move

(and White's potential 3-3 invasion) are hence both very big moves.

Is the attach joseki bad? 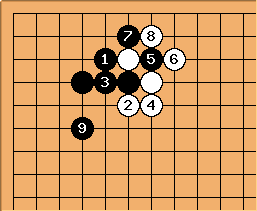 Classical go didactics dictated that contact play is often bad technique because it strengthens one's opponent. The attachment move was often criticized by go teachers as vulgar, and it was primarily seen more with beginners and amateurs. The Attach-Block Joseki was historically viewed as the "worst possible sequence" for Black due to the empty triangle until Lee Changho (9p) popularized the move in the 1990s.

The attachment joseki has always been viewed as a situational move that is best played when whole board position is suitable for Black, particularly when Black has potential to the left side. In the book Fuseki Revolution (2021), Shibano Toramaru says the attachment as a good way to develop the side in the sanrensei fuseki, and he recommends it over the traditional one-space low pincer.

Nonetheless, beginners and amateurs often use the attachment joseki to secure corner territory. Several popular variations of the attach joseki result in a strong and large corner for Black such as the depicted Attach-Block Joseki, which has nearly 23 points of solid corner territory with no aji in gote. Critically, these sequences end in gote for Black, and White has a high position with very effective side-facing influence (compare with the kick joseki where white has center-facing influence).

Modern go emphasizes and places a high value on sente. Players should assess for themselves what they believe is the value of sente at their level when determining which joseki to play, because sente grows increasingly more valuable as players improve at go. Is a 20-point gote joseki worth the value of a 10-point sente joseki? The answer can be subjective, and the differences between joseki can be very subtle (many have AI win rates that differ by less than a point), especially with the many variations branching from the attachment joseki. It is difficult to call any particular attachment joseki definitively bad, and the attachment joseki are very sensitive to the global board position.