Avoid Being Sealed In

Weak groups, and even groups that will not die, should jump out into the centre while they can, assuming there is no good way to develop or connect along the sides. Reasons:

There is a related proverb: Jump out once and then make eyes?.[1][2] 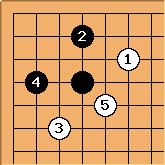 do not jump to the center but defend within the corner. Black controls the corner for now, but White gains lots of influence. There is little room for Black to develop. At most, Black gains about nine points of territory, while White faces most of the rest of the board.

Instead of being hemmed in, move in the other direction. 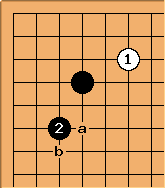 approaches the corner, but Black

at a or b) prevents him from being shut in. (Responses to

can be found at 4-4 point low approach.) 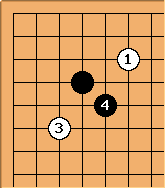 If White gets her double approach,

still avoids being sealed in.

[1] Is that really a proverb? Says who? [2] Yes. It is said by koreans, (also probably by japanese and chinese)

How about doing a page for it? (The page is already created.)