is very much affected by the presence or absence of a black stone at the circled point: one could almost say there are separate joseki.

For example, if White now invades at a, Black should block on different sides, in the two cases. 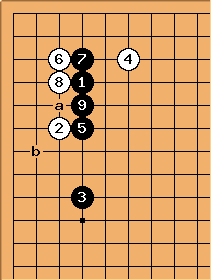 Black plays for influence, W for territory. Both A and B were played in equal amounts. A is easy enough to deal with, but what about B? 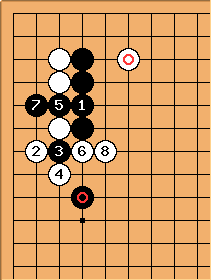 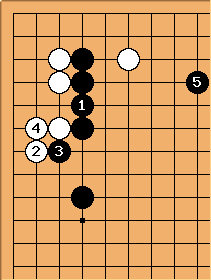 Another common outcome. B gets solid influence, and pincers the cut off W stone. Nothing complex here, W's territory and aji with his cut off stone will counterbalance black's iron wall of strength.

Now for the apparently new sequence: 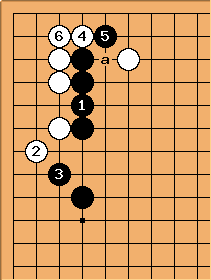 Black now plays a tenuki because blocking at A would be slow. B cannot be bad, however W is noticably advantageous considering B owes a move at A, and therefore the tenuki comes at a high price. But what is the true cost? W wins 2/2 so far, but before jumping to conclusions, Gu Li played

against Choi Cheolhan in the 2nd game. Was it an experiment? or confidence in the outcome?

update: 05/28/11 - I've seen this joseki a few more times now in tygem 9d games, so it's highly likely that it's a new joseki and should be studied.