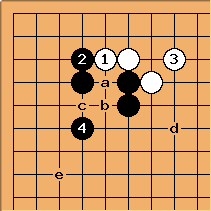 is not hard to grasp. For Black to play here would make an excellent shape - White should never allow that. The most obvious way to avoid this is by playing at

next is a solid way of playing.

is now necessary to defend against White pushing through and cutting with White a-Black b-White c. White has made a relatively safe group in sente, while Black's corner territory is not small. White next could play tenuki, but if she does choose to play here, she can develop her upper side with d, or attack the black territory at e. 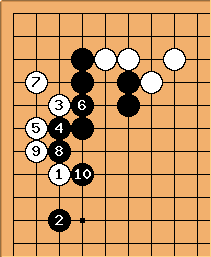 If White does play at

should be the answer. Defending the corner would be bad: Black cannot expect to win by playing so submissively. The peep with

is one possible way to continue. In the continuation, White eats away Black's territory, but Black becomes strong on the outside. 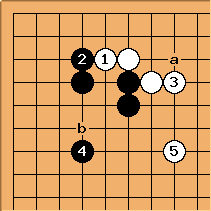 , being on the fourth rather than the third line, makes less eye-shape but works better in the center than White a. Black will still defend at b or

. White will probably want to jump out to

or some such point quite early, perhaps intending to make a framework on the top. 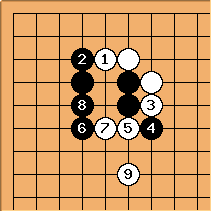 will start a fight in the center, but White should think twice about playing it, because this fight will most often be to Black's advantage. Black must without fail play the hane at

. After White cuts at

, Black fixes up his shape with

. but don't peep at bamboo joints? 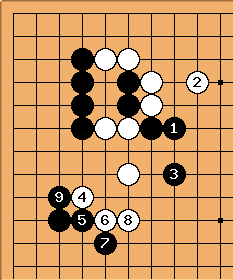 This variant was played by Yoda Norimoto and Cho Chikun in the 1999 Meijin title match. It shows the main problem that White might have in this joseki: In this fight, Black might well be able to build territory on the left side while attacking. 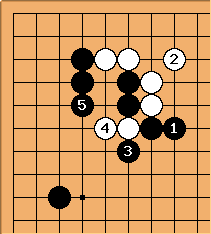 After the game, the aggressive move of

, the fight seems to be even more clearly in Black's favor. 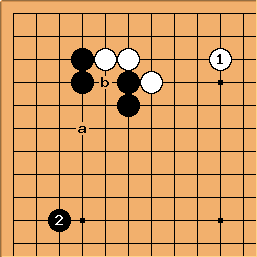 Extending along the upper side with

is an old-established joseki. Black would do best next to extend far along the left side to

. If he already has a stone around this point, he can either strengthen his position there or play elsewhere.

For a thorough analysis of White's threat of pushing at b see 4-4 point low approach tsukenobi, degiri.

Playing at Black a next is not a good strategy. If Black finds himself wanting to play here, he should have played here directly, and not have applied the tsuke-nobi first. 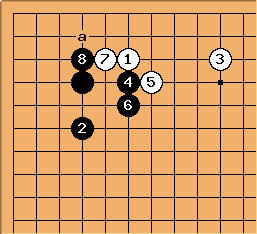 This tewari analysis shows why:

is joseki, but for Black to attach next at

would be a mistake. The exchange that follows strengthens White, while not doing very much for Black's own position. If Black wants to defend the corner after

, he can play directly at

(or a), but the exchange of

is clearly to his disadvantage. Still, the resulting shape is the same as when Black plays at a in the previous diagram - so we must conclude that that move too leads to a bad position for Black. 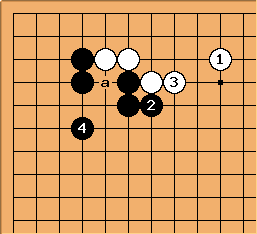 But Black can do even worse. Exchanging

may look like kikashi (a forcing move), but it actually is a thank you move - the only thing Black is accomplishing is that he is helping White to defend her weakness. Now

is necessary to defend against the threat of White a. Black has been helping White to an even greater degree than before. 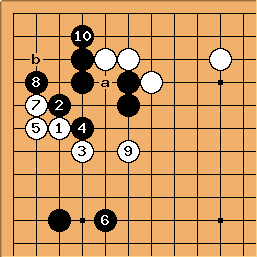 The proper way for White to play here and use her aji, is the invasion at

here, rather than the push at a. Alternatively, White could play further down, emphasizing the single stone rather than the tsuke-nobi position. Black almost invariably answers at

, after which the sequence to

is considered joseki, although it is of course not written in stone.

is necessary to guard against White b. 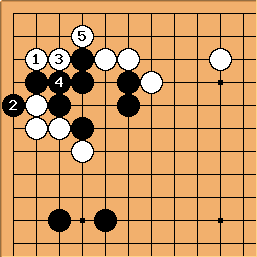 in the previous diagram is considered a trick play. If Black plays at

, he falls in the trap, and White takes the corner. 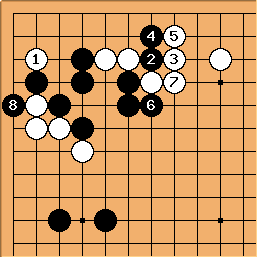 is the key move for foiling the trick play. After

, White cannot connect her stone in the corner with those on the outside.

is now a wasted move. 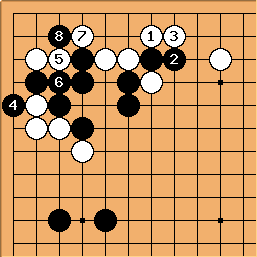 Giving atari from this side does not help White either. 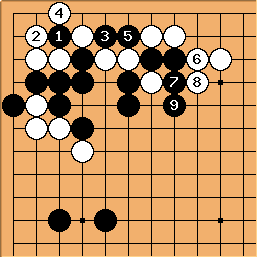 the right move in the previous diagram? To my 20 kyu eyes, it seems to be on the wrong side: White can live in the corner. 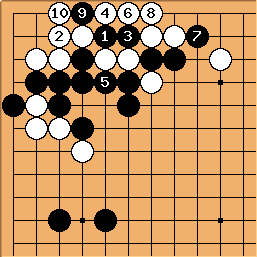 However on the other side:

if White tries to connect to her stones on the right, she dies. 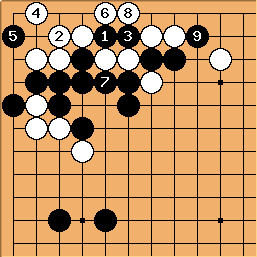 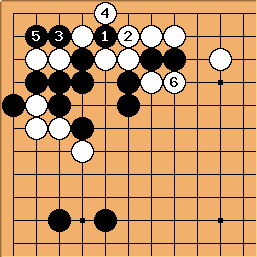 So this way is probably better for White. Black sacrifices his two stones but takes back the corner.

Your diagrams are correct, but the conclusion which you draw from them is wrong. Having White live in the corner like this is no problem for Black at all. Sure, Black has lost the corner territory, but his gain in thickness is worth much more. On the other hand, your last diagram is not very good for him. Sure, he has kept the corner, but it is only 7 points in size. White's territory at the top is clearly larger. It might be playable for Black because the white stones on the left side are almost dead, but if I had to choose I would not hesitate a moment that the first diagram is better for Black. Black has more thickness and about as many points, White has less thickness and fewer points. - Andre Engels 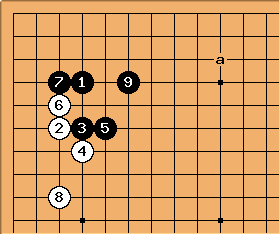 ''However, it is also possible to play an attachment (tsuke) against the approaching stone, such as the old joseki sequence in this diagram. (Black often chooses to play 9 elsewhere.) There are also various other options, such as a pincer against the white stone from the direction of 8 in this diagram.

What is important is to envisage what shapes your stones will have after the sequence has been played, and to evaluate how this shape will work with your surrounding stones.

Bill Spight: I don't know why Go books persist in calling this a joseki. It has been known for over a century that Black 9 is inefficient. Black a instead is good. Maybe they think that Black 9 is OK in a handicap game. <shrug>

Charles Matthews Indeed, I recently saw Magari 9 dan in a lecture set up this joseki in the four corners in a four-stone game, in a spiral pattern. And then after a short continuation claim that White was leading. So this sequence must shed quite a few points.

Crippler: According to Ishida Yoshio, when playing handicap games with 6 stones or more, making an iron pillar is the good way to play instead of black 9''

is called maek in korean. I guess this works, if ladder works. 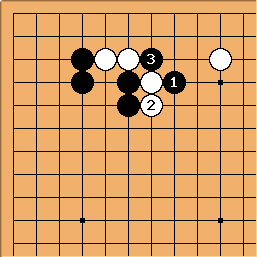 is wrong, but I don't see a ladder. 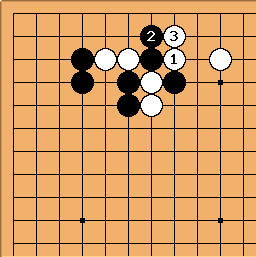 Black seems not to have anything here. 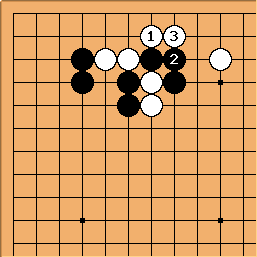 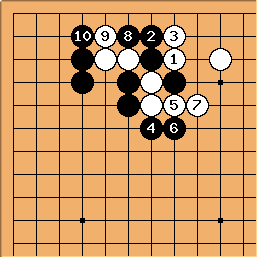 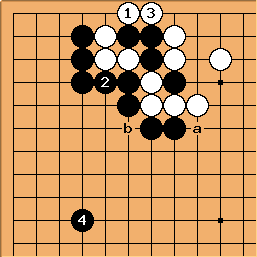 Somebody: 1 seems slow to me. Tenuki instead? I'd much rather prevent 4 than take a couple of useless stones in gote. (white group has three eyes already)

Alex: Well, let's estimate the value of the move from an endgame point of view. It's at the very least 14 points: 3 prisoners + 4 points of territory for whoever captures. In addition, whoever captures will get a hanekaeshi in sente in the endgame. In White's case, Black would have to back down once, to avoid ko, so 4 points there and 2 points for Black's hane-keshi, bringing our total up to 20 points. In addition, the question of who makes the capture has some bearing on the possibilities of pressing at a and the aji around b. These are of course hard things to put a numeric value to, but 20 firm points + some miscellaneous small potential is sometimes (not always, of course) big enough to be worth playing in gote in the middlegame. I could imagine strong players omitting

for a while if there were urgent moves to be played elsewhere, but I think you'd see one player or the other make the capture fairly soon.