is unusual; it is played only in less than 1% of professional games[1]; usually when black has a special plan, such as expanding a moyo along the left side.

White will usually respond either by entering the corner at a, or by playing an extension along the side at b (other extensions, such as a one-point or two point jump, or a large knights move, are also possible, but much more rare) 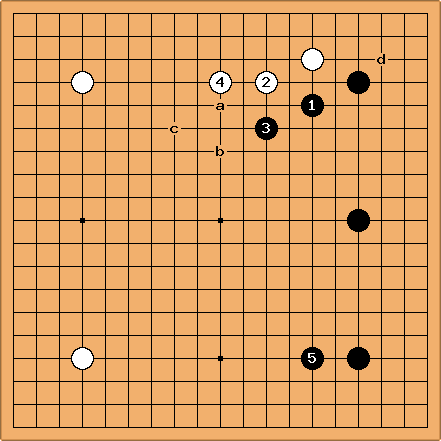 The knight's move cap of

can be considered a joseki, which immediately turns the game into a framework versus framework game. In some cases,

is seen playing at a, the Black b, then White c. In any case, the 3-3 invasion at d will become a big point in the game.

This joseki is seen almost exclusively in amateur games, and rarely in professional games. Professionals have indicated that while this joseki can be fair for both sides, it leaves too much uncertainty for performing proper positional judgment.

When white enters the corner, black can block on either side. Which side is correct depends on how the whole board position combines with the resulting local position.

Block on the open side

Most lines here are not joseki! 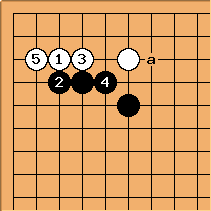 is one way to play. After this, black will usually play tenuki, though he may play a.

By playing this way, black gets sente. 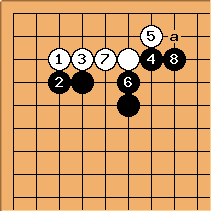 The other choice for

is this one, and the sequence given here is pretty much forced. White can push once more at a, or play tenuki.

This way, black keeps white smaller, and he is stronger on the outside, but he ends in gote. 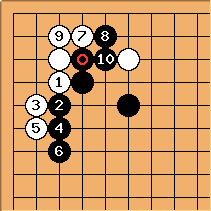 If black splits with

, play can continue like this, which is the same as the sequence after the 3-3 Invasion. White may, in this position, change the order of the exchanges

, the resulting position is the same.

This way, black keeps white smaller, and he is stronger on the outside, but he ends in gote 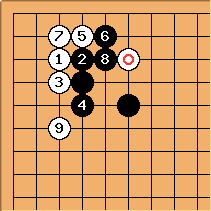 The other sommon sequence here is this one, which is mostly the same as 4-4 point low approach, low pincer, interception?

In this variation, black allows white to get out with

, in exchange for which black can take sente. 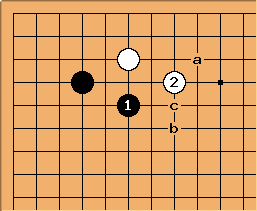 is the most common extension along the side. Extending to a was popular in China in the 16th and 17th centuries.

has focused on the left side, the most common follow-ups for black are to either play another capping move at b, or to attach on top at c. 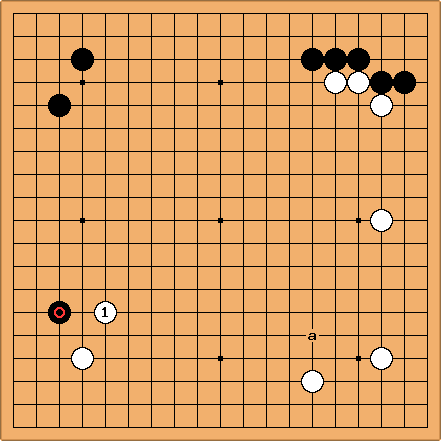 The capping play White 1 is correct. This move is generally considered irregular but that need not concern you. Since the white stones are exerting their power by threatening to form a framework based on the lower right corner, they determine the direction of play. Thinking that way brings moves such as white 1 to mind.

Of course this cap does not turn all of the right side of the board into white territory, but one thing is certain: White 1 plays a major part in building up White's framework on the right. (Takeo Kajiwara in The direction of play, p. 172.)

However, he said before the marked Black stone should have been played at a, reducing the prospects for White. 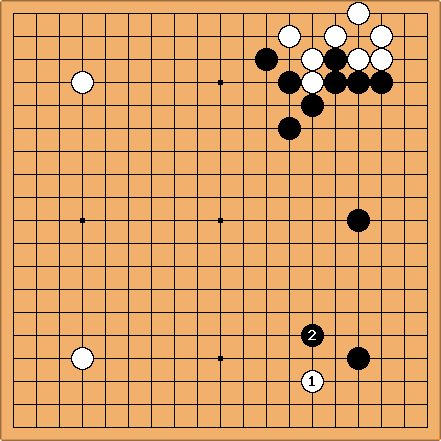 This game is the semi-final of 27th Gosei (2002). The diagram shows the board after the 25th move. Cho took 3-3 next. Later, he invaded at 10-10 with the 52nd move. However, the central white group got separated and could not secure a second eye, Black won by resignation. 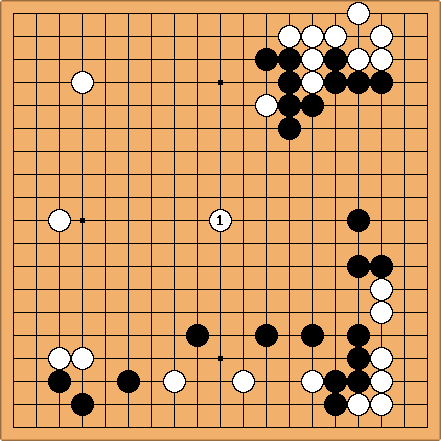 [1] Of the 51754 occurrences of the low approach in the pro games shipped with SmartGo, only 323 have this cap. SmartGo marks it with a question mark, since only 44% of these games were won by the player playing the cap.