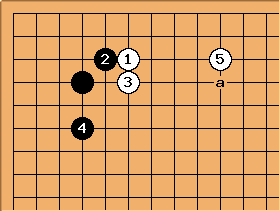 When there is no Black pincer stone at or around a, then the diagonal attachment at

was usually considered a bad idea before the AI revolution. The goal of the

attachment is to induce white to add a stone at

heavy. However, without a pre-existing black pincer, white has sente to play

(or a), an ideal extension, and black has thereby made white strong, rather than heavy. Additionally, the black corner is not secure territory, so Black has suffered a loss. See also section (ii) of joseki as a source of bad habits.

Usually it is also not a good idea for

to be played at a pincer at or around a. For this variation, see 4-4 point diagonal attachment, pincer (without one-space jump).

One may want to compare and contrast this with the 4-4 point diagonal attachment joseki.

However, there are always exceptions to the rule. Here are some examples in professional play where the diagonal attachment is played without the pincer. 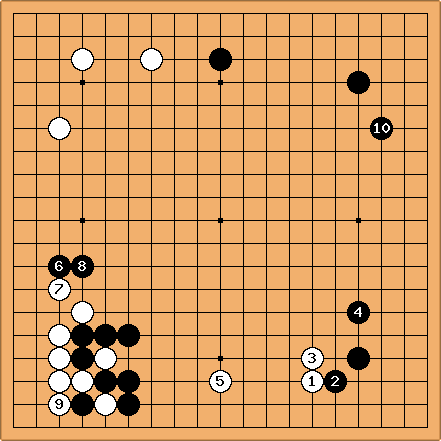 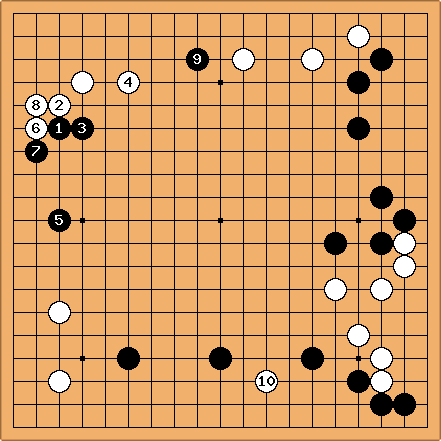 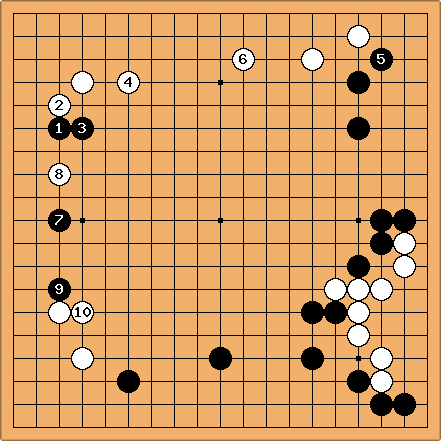 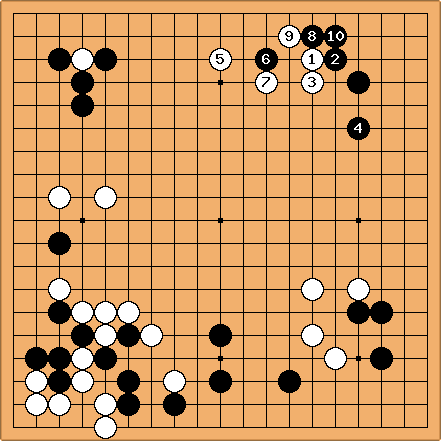 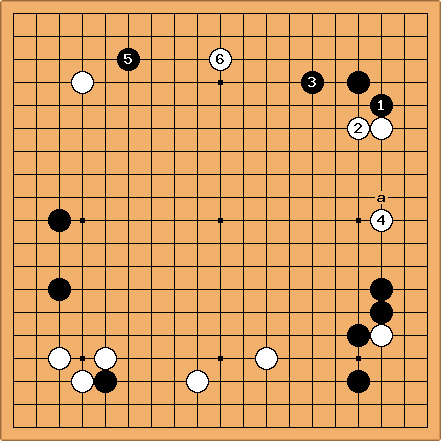 It seems that professionals do in rare cases play this (pseudo-)joseki, typically when the player playing it is strong on the side. The idea is undoubtedly that a short extension (to a) is overconcentrated, but a longer extension like here leaves black open to an invasion and thus an attack. Prerequisite is that black is strong enough that this invasion must be considered important aji. 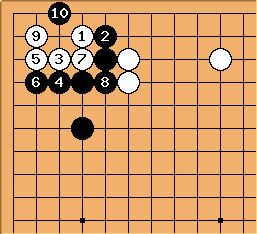 Brian: This page mentions that black's corner is not secure, but will someone please show me how white could live in black's corner? I'm 12 kyu and I don't see a way for white to live here even if black's next move is a tenuki. 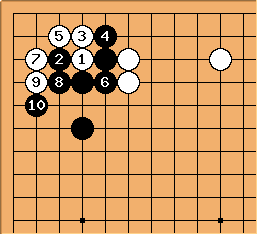 Brian: I kept trying to solve this problem, to make white live, and I think I found the key - white should place itself in double atari. I'm still not sure if this is the best line of play for both players, so if someone else wants to post a better solution, feel free :) 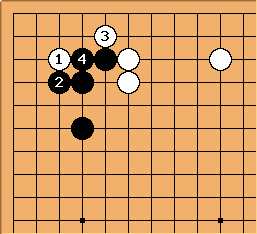 Uberdude: White would start at 3-3. If black really wants to kill it he may be able to but would suffer some painful forcing moves, so quite often it's actually better to let it live and damage white on the outside. You can find more on this common corner shape with SL's pattern search feature, leading to pages such as 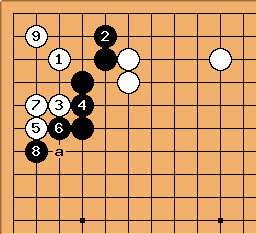 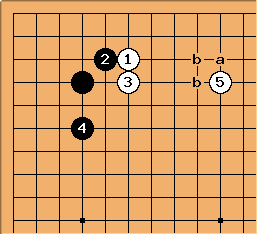 4k question: So of course the extension to

(or a) is considered the correct distance from the two stone white wall, however... The diagonal attachment is bad for black in the absence of a pincer on the top because white settles but black's corner is not secure. That being said, if white actually invades the corner, white can live easily, but black cuts off the corner from the top side in the process and significantly weakens

. So, I'm wondering if white does better to play a more conservative extension to b instead of

. Then white can invade with a free hand, unless black spends an extra move in the corner, and even if black does that, white is still secure. In other words, is it better for white to play the smaller extension to blunt the force of a black counterattack and thereby magnify the aji in the corner? (even though just asking the question makes me believe that white should do the proper extension and wait for good timing to invade)

Charles The reasoning seems to be wrong. A shorter extension wouldn't make a group that was easier to defend if it became weak (by making eyes or running away).

More explicitly: Suppose in this position

, which White has ignored. (The play with

can occur after the 3-3 invasion, or to prevent the invasion happening.) 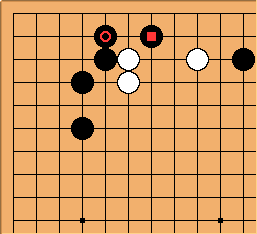 Then there is some tactical point one can indicate: 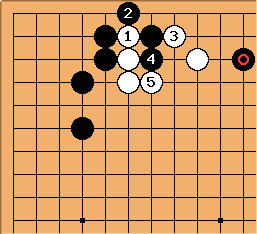 (for example with a good ladder running south-east). That is even with the

stone there. So there is an aspect that the shorter extension is better for 'blocking'.

But this is looking very closely at the small-scale picture. It is just about defending existing stones and space. 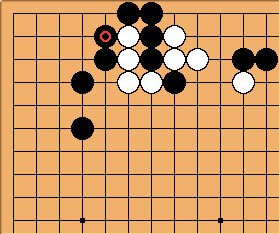 By the way, the kind of thing not everyone spots in a real game. The ladder is bad for White, who is fighting out of this situation. White to play!

AJP: to be fair, white's position here can't be as dire as portrayed, since in order to play

in sente black has already conceded life to white in the corner, making the black stones on the left eyeless and weak, rather than invulnerable as in the diagram.

Charles Well, no. Playing this descent to prevent the invasion is a pretty big play, anyway. To understand how big, you have to look at its follow-up attack ...

AJP: Oh come on... there are 11 black stones in the diagram and 8 white stones. Did black concede the rest of the board to get this one corner and attack?

Charles Actually Black may well have to make that calculation: it is typical of the thinking based on local tally being applied in the early middlegame, rather than the endgame (where you get clear results), There is nothing at all unreasonable in talking about such variations. I'm bringing this one up, to try to get some handle on your query. 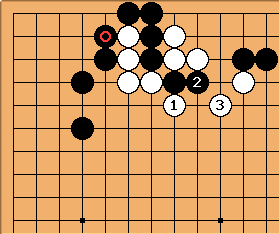 White connects with a net if the ladder is bad? Black gets some kikashis to help build thickness facing the bottom, but this looks mostly redundant to what black already has there.