The information on this page is meant to be introductory in nature. Stronger kyu and dan players are advised to look at 4-4 point 3-3 invasion joseki instead. An overview of SL pages about the 3-3 point invasion is given on All About 33 Point Invasion. 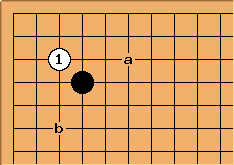 The 3-3 invasion means playing a stone on 3-3, when an enemy stone at 4-4 (and perhaps some extra stones) is already present. It aims at making a living group in the corner, taking some territory and scooping out Black's base. In return, Black will get influence towards a side and the centre. Black has some options to resist this aim.

The 3-3 invasion, as in the above diagram, has become a standard move in the opening, since the arrival of strong AI based bots. Before, an early 3-3 invasion was considered bad, since it gave Black too much outward strength. Nowadays, new variations and insights have given this invasion more credits. 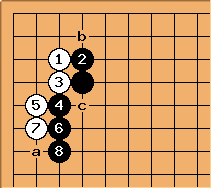 Black will invariably answer with

, on the other side). To choose which way to block, the general rule here is to block on the wider side, seeking to maximise the usefulness of the outside strength black is building.

ensures that White's corner will not be too small.

is an important move, preventing white from making progress out into the centre.

to avoid Black playing at the same point.

is one usual continuation.

Usually crawling along the 2nd line is bad, but

is important to prevent Black turning here in sente. White often continues with another crawl at 'a', a play that used to be considered bad. 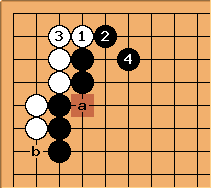 In the past, it was considered necessary for White to hane at

, and the joseki ended with

White has sente and a few points in the corner, but Black's wall is like a block of concrete, controlling a large part of the board.

This result is regarded as good for Black locally, but was historically considered White's best choice.

Today, due to insights provided by AlphaGo and other AIs, the

exchange is avoided. Instead, White now plays elsewhere or crawls once more at 'b'. 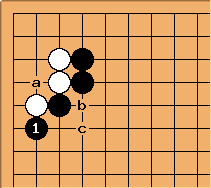 For White to take the corner in sente may not be to Black's liking, so Black can play this double hane. If White backs off with a, Black b (or c) will seal in White into the corner. That is considered too good for Black. 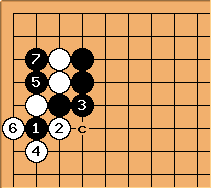 White will capture the cutting stone, making a ponnuki on the side, but Black gets "his" corner back, including the capture of two stones. Many strong players still like this result as a simple countermeasure against an early 3-3 invasion.

In the main sequence, White gets the corner AND sente. In the double hane variation, Black keeps the corner and White gets sente. Black can also choose to give up the corner but keep sente.

A simple way to take sente is to stretch at

. White must prevent being enclosed and play

. In the older days, Black's wall would need an extension, but nowadays it's considered ok to play elsewhere.

Black can also play the knight's move to get sente. White gets more on the left side as compensation, with moves like a or b next. For more discussion see 44Point33InvasionJumpingAway.

Interestingly, the proverb the enemy's key point is yours does not apply to this situation. Black could technically prevent the invasion by playing a himself, or one of the b points, but this is not considered urgent or good, while White's invasion is.

Instead, Black is expected to develop his open corner by an enclosure at

(or symmetrically at c). This still leaves the corner open for invasion, be it that White can expect a ko instead of plain life.