The 4-4 point low approach, small knight extension, attachment is the most common local continuation to the 4-4 low approach since the AI revolution.

Unlike the the traditional slide joseki, Black cannot tenuki from

, which allows White to quickly settle. The subsequent hane

are the only natural moves in this position, which forms a staircase shape.

The most common result(s) are comparable to the traditional slide joseki, except that strong AI programs nearly always play the attachment instead of the slide. This joseki also has several variations where either player can opt to take the corner territory instead of outside influence, variations that end in sente/gote, as well as variations that could potentially involve kos.

Moves are listed by frequency in professional games[1], which is sensitive to whole-board position. Bolded moves are commonly considered joseki. Strong AI programs tend to evaluate a-e similarly (less than 1 point difference in winning rate)[1], although the atari is often regarded the best in most situations. 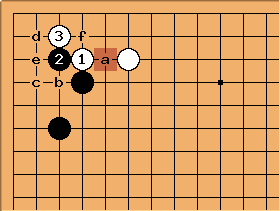 The atari down variation is typically good for Black because the influence is great. Black gained control of the focal 5-4 stone with

Counter-Atari Variation (Dia 3), negating the value of Black's influence. As a result, professionals tend not to play the atari down variation if White is strong on the top.

. Typically, this is done when Black has potential towards the top. 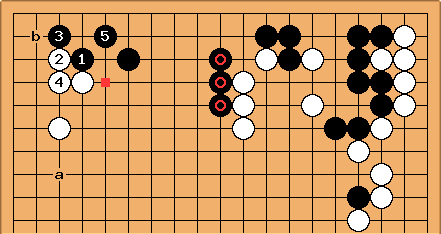 The solid connection is a simple and solid response. It is a good move for beginners or anyone who wants to avoid the AI joseki, and it is not that much worse (less than 1 point winning rate)[2] than AI's favorite atari joseki. In fact, many professionals play it (~14%), often times on an open board for apparently no reason at all, presumably because they did not want to play an AI joseki.

On an open board, strong AI programs regard the solid connection to be slightly inferior to the atari down variation. The approacher settles (too) easily and has many good options later, with a powerful shape at the unoccupied 5-4 position (marked square), an approach at a, and territory at b.

, presumably because the Counter-Atari Variation (discussed above) would have been good for Black.

The solid connection is a good defensive move when White wants to cool down a complicated and potentially dangerous local situation. Neither players have occupied the focal 5-4 point, the influence is balanced, and white has sente.

Another variation regularly played by professionals is the hanging connection (~5%)[1]. Since it ends in gote for Black, it is normally a situational move, except that there are many situations in fuseki during the opening where it may be a good move, and it is quite popular among professionals. 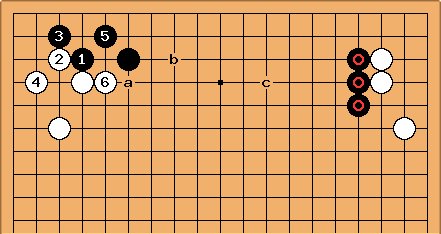 Why would professionals be so eager to play a gote joseki? The hanging connection repeatedly occurs in the opening of professional games, and a representative example is illustrated by Fan Tingyu (9p) (B) vs. Lian Xiao (9p) (W) (2019).

In this game, the top side of the board is especially valuable because Black's three-stone wall does not have an extension. Both players would like to play a move or establish a position on the top side. The atari down variation may not be the best choice because it gives Black a strong position on the top, and it helps Black develop that potential. Later, it will be difficult for White to invade or attack Black's wall if White is strong on the upper left.

Instead, Lian Xiao (White) plays the hanging connection and dares Fan Tingyu (Black) to tenuki. If Black responds locally at a, the top side is still very open and White can comfortably invade or reduce. If Black chooses to tenuki and plays away, White has a follow up at b, which pressures Black's corner (not fully alive) and helps establish a position on the top.

In summary, the hanging connection is played when White believes that the top side is important and wishes to get a move on the top, even at the cost of giving away sente. White

is a critical move that occupies the 5-4 position, which is essential for local shape and projecting influence in this quadrant of the board.

The double hane variation is territorial, and Black should anticipate that it might end in gote. It is typically played when neither the top nor bottom sides are interesting for Black, so gaining influence would not be as valuable. White gains control of the focal 5-4 position and has an option to take sente. It is not as common (~2%)[1] in professional play.

The extend variation is rarely seen in professional play (~1%)[1]. It encourages White to play at the focal 5-4 position, which White is more than happy to take.

Although Black has sente, White's influence is quite good with aji at a and b.

It is a mistake for White to play the hanging connection and cede the focal 5-4 position (Incorrect Variation). A ko is possible (Ko Variation), but "There are No Ko Threats in the Opening". 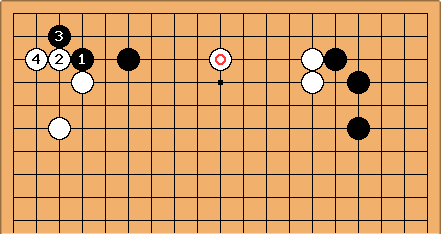 One situation where professionals may play the extend variation is illustrated by Gu Zihao (9p) (B) vs. Chen Yaoye (9p) (W) (2018). In this game, Chen Yaoye (White) already has a stone near the hoshi (marked with a circle), which blocks Black's natural extension.

In this situation, it makes sense to play the extend variation because Black is unable to get an effective extension, and the marked stone neutralizes the value of White's influence. 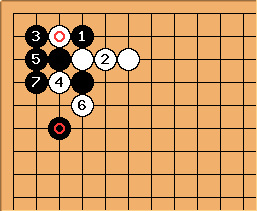 The sideways atari at

is a common kyu mistake. The White marked stone (circle) is not valuable and White gains very powerful influence. Black even took gote.

On an open board, any of the six variations listed on this page (except the sideways atari) is considered playable in the opening, and the difference in AI winning rate is less than one point.

Professionals regularly play whichever variation that suits their style, whether it is the solid connection, hanging connection, or double hane. While searching Waltheri [1], it is common to find professionals playing these less common variations on an open board for no apparent reason at all.

In some situations, certain variations are ideal, but the difference between these joseki can sometimes be so subtle that ultimately it is up to the player's intuition to decide whatever they feel like playing.