The 4-4 Point Low Approach Small Knight Extension Slide 3-3 Corner Defense is the most common response to the slide. The purpose of move is to defend the corner.

Since the White's stones are weak, White will nearly always play some form of extension.

Moves are listed by frequency in professional games [1], which is sensitive to whole-board position. Bolded moves are commonly considered joseki. 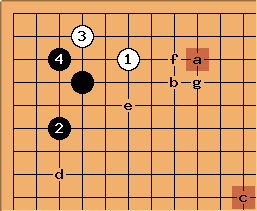 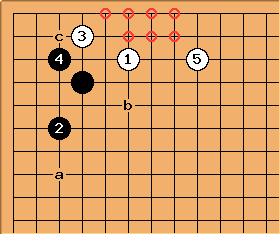 The Two-Space Low Extension is traditionally the most common continuation (~62%) [1] and completes the traditional "slide joseki". The low extension forms a strong base for White, which is recommended in for beginners in most situations.

Two-space extensions on the third line are a common shape in go. They are the ideal length of an extension in order to create a base, which can be approximated as the spacing necessary to create one eye. The knight's move with the

stone almost secures enough eyespace for a second eye, so White's group is very resilient and strong. It is also territorial and aims to secure ~7 points for territory for White.

Although it is Black's turn, both players will typically tenuki from this position and play elsewhere. White's follow-ups in this position include a and b, which seek to approach Black from the opposite side or jump to develop more influence.

There is also an endgame push at c which is double sente and worth about 4 points (8 points value). 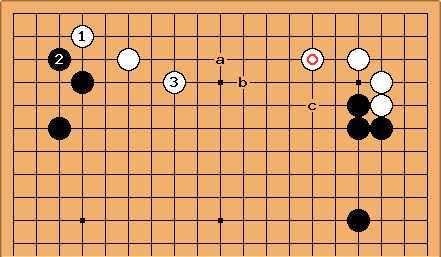 like this, which is usually done when white has a low solid position in the upper right.

For example: If the position in the upper right is like this (the result of a common joseki),

is better high, because of the low solid position of the

were a two space extension, white would have four stones on the third line in a row, and would have a very low position.

invites Black to invade at a, after which white can use the power of

effectively in an attack on the invading stone. If black does not invade, white may build her position with a move at b or c 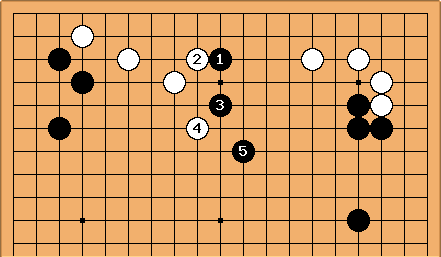 If black invades, we can expect something like this sequence.

Traditionally, tenuki is not advised. However, professionals have chosen to tenuki from this position, as it is still possible to settle the group or fight. 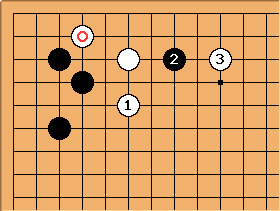 against me instead of extending on the top. I had already played at the middle left star point, so I was strong on the left and probably should have just played tenuki here, but I followed the advice to play

if White omits the extension along the top. What is the correct reply to

See Go Bloopers for a discussion of why 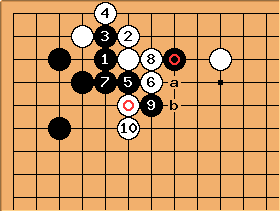 As you can see, the continuation went badly for me in this corner. After

, I admitted defeat in this corner fight and decided to cut my losses, playing elsewhere. My marked stone and

are horribly weak (the ladder after Black at a, White at b, was bad for me), and White has a strong position on the top and good influence toward the center.

So, be careful with the advice about attacking with a pincer at the marked stone if White omits the extension along the top. If White plays a different useful move such as his marked stone here instead of the extension, direct attack still may not work.

You have to attack with constructive purpose in mind, rather than for the sheer joy of making your opponent respond.

to the point where this stone is lost. 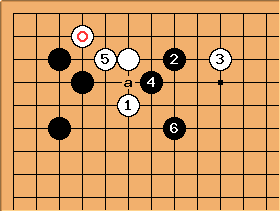 You could try the peep at

, which white should resist with

rather than connecting with a. Then jumping to

attacks the white stones on both sides. 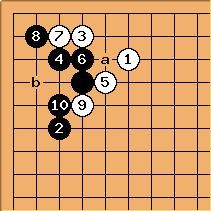 Strong AI programs sometimes prefer the two-space mixed extension instead of the two-space low extension. However, it is not seen very often in professional play.