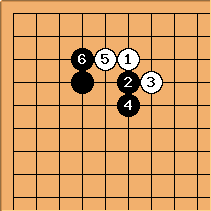 When black attaches on top with

. This page discusses what happens if white instead peeps with

Peeping first is not joseki, and is locally bad. Only under special circumstances is this move playable, see: Pro play example. 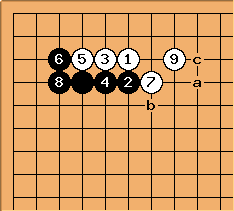 Uberdude This summary is no longer true following the AI Revolution: according to superhuman AI it is not unusual for extending at 5 instead of hane at 3 above to be the best move, particularly if after 4 you were planning to only extend at 5 instead of the more common move now of attaching at 6 (to which black hane in corner not wedge is almost always best reply). This can be understood as extending at 5 allowing black to block off the corner on the 4th line with 6, whereas attaching with 6 stops black making such a large corner and white gets a bit more eyespace and territory too. The standard AI joseki is as on left, with a as a future shape point for black to aim at. The mutual defence of black 8 allowing white 9 is the peaceful variation, cutting for 8 is usually not as good but can lead to complicated variations. Neither the black or white groups are 100% alive and they might come under attack in future fighting. 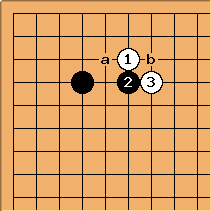 The peep might seem attractive when white is afraid of 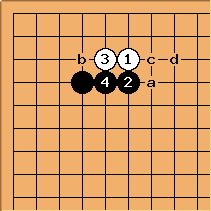 For black, the normal response to

. White can next try several moves, like the hane at a, the extension to b and c, or the jump to d 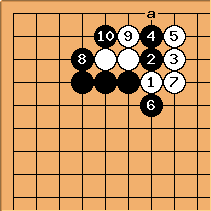 After the hane of

, black can cut at

, and sacrifice two stones. With

, black gets influence in the center, after which black forces white to capture the two sacrifice stones with

(white captures at a). 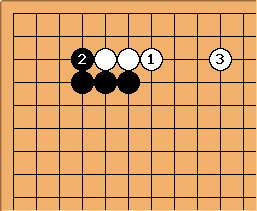 is slow and unappealing. Black takes the corner with

, and white is forced to make a base for his heavy group with

. White is clearly worse of than in the normal joseki 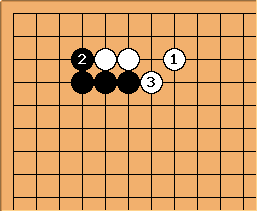 If white tries to play lighter with

, black can still block in the corner. White then makes shape with

, but his position is cramped. 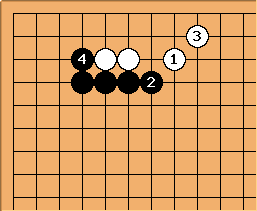 if influence is more important. Now, white will have to deal with the risk of black pushing through and cutting.

is one option. White's position is low, and black can still take the corner with

(which can also be elsewhere) 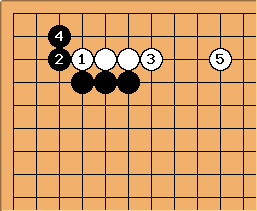 like this, black will hane. If white plays counter hane with

, black will get to play hane at the head of three on both sides. So white will probably extend (Uberdude/AI: actually hane on 4th line is better), allowing black to take the corner. 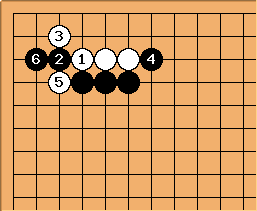 Question (Steve, 10k): What if white does play the counter hane with

? Black follows with hand at the head of three on both sides as suggested. But then white can cross cut the first hane to make atari on the third line facing the edge of the board and I'm not convinced that black can win the fight. Can anyone suggest possible continuations after the cross cut please? 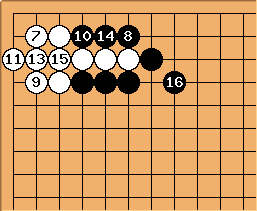 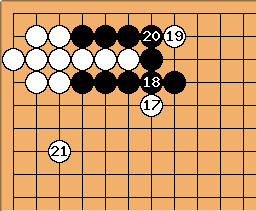 In this variation with

black sacrifices the 2 stones rather than saving them at 9 (which leads to a complicated but likely disadvantageous fight assuming both players play well) and squeezes white to a dumpling, but black needs to come back to connect the cut at

so white gets a nice peep there and is happy to take the corner territory from black. Who this is good for will depend on the direction of the rest of the board but locally speaking white has gained a little. 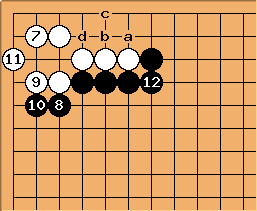 If the left side is important black might choose this simple sacrifice variation. Black would like it if he could have exchange a-d before sacrificing, but hoping white would answer at b instead of capturing as in the previous variation is a dream. 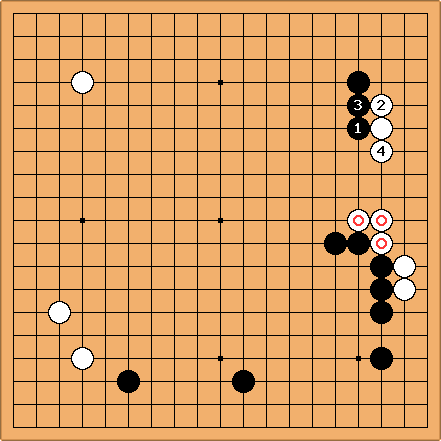 due to the special circumstances of the position of the