The pincer and the common replies 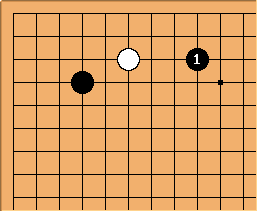 This is a special-purpose pincer and is not ordinarily found in modern professional play[1]. See below. 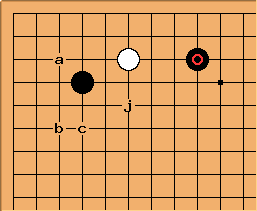 White's ordinary answers are at a, b and c. The jump out at j, standard in old Chinese games, is sometimes seen. 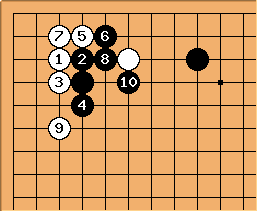 Suzuki and Kitani's Small Joseki Dictionary also state that the two space low pincer is rare. (And that's historically.) However, they give this diagram as joseki, with the comment that you can't say that this is better than having a three space low pincer.

The fact that it is still rare does not mean that expert opinion about it has been revised. 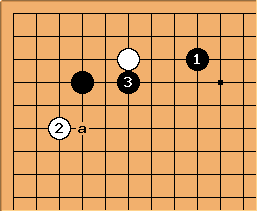 They also say that

in response to the double kakari produces a somewhat favorable result for Black.

This was at a time when the usual advice was to attach to the stronger stone, suggesting a play at a instead. Today pro opinion about that advice has changed.

Here is a possible theory as to why it is not common, but keep in mind expert advice on the matter is not final. 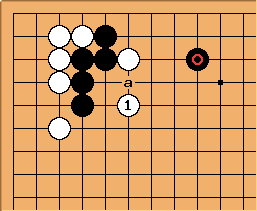 Consider what happens after White jumps into the corner and the usual follow-ups are played. If now Black played at a, the pincer would feel overconcentrated. On the other hand if he omits a, White jumps out to

and the pincer feels slack. Hence it is difficult to find a balanced follow-up for this pincer, locally. This is why the marked stone needs extra purpose in relation to the upper right corner.

[1] This may not be true any more. See 11thNongshimCup/Stage 1 Game 1 for an example. The continuation in that game is: 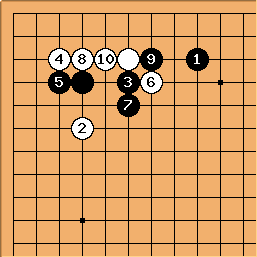 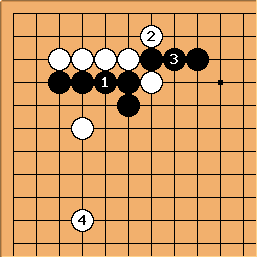 Note that black has an enclosure to the right of this diagram in the game.

tapir: today, a dan player in our local club asked about the two-space low pincer why it is fashionable again. the argument that after the jump out the shoulder hit isn't as nice anymore seem to have impressed him a little bit. (the same explanation i offered at the nongshim cup game) i wonder whether some stronger player can offer his/her opinion. 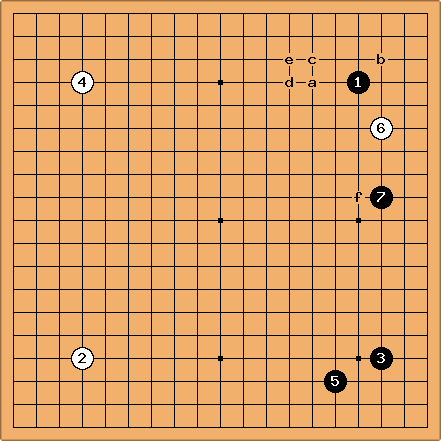 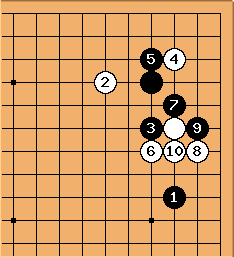 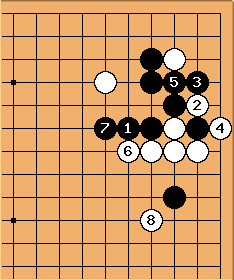 and so it ends. although black appears to have a cap on W's counter-pincer stone, W has strength facing black's keima (remember the original diagram), and perhaps this is why black loses more often than wins with this position. 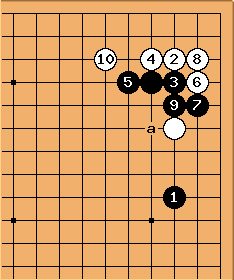 common choice, you'll see this among KGS players more often than not if you want to try the long keima pincer. the outcome has black thickness facing his shimari, which is favorable(this is probably the reason why you'd want this outcome, because it works with the shimari face so well), however W has a solid corner and aji left over, which if you're trying to develop a moyo with this thickness will be trouble later. this aji is compounded with the fact that black 1 is 1 space farther than normal, and black cannot be slow and play A with his sente. so this is why black 7 wasn't played as much. until now... 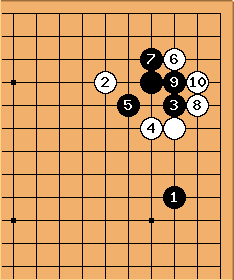 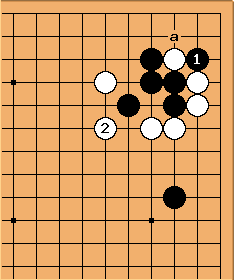 White 2 is a strong move which uses the aji of A to prevent any overaggressive cutting. if black tries it, he will have to eventually fix in gote, which is terrible for any center fight. however if black plays his cards right and instead cuts smart and then fixes, he will split white up and given the shimari face on the LR side of the board, black will obtain a great position 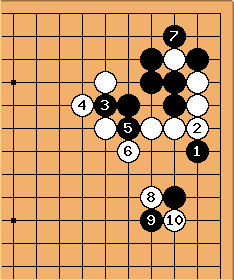 here black has pushed and fixed, leaving white to deal with the cuts in gote. the pros dislike this for W and instead opts for white 8, truly "whole board" thinking. 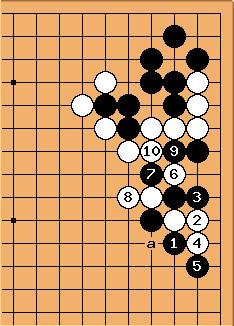 chaos ensues and white has now obtained a little more strength at the cost of giving black strength facing his shimari face. but the joseki is still not over. 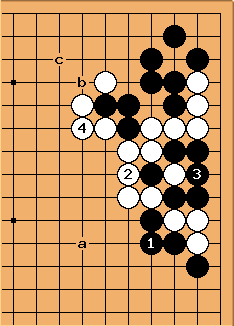 this is the end. outcomes: white got some thickness... and not much else. black got a corner, strength facing his shimari, sente, plus cut aji at B. also, black tends to approach a corner with sente, and quickly get back to play A as fast as he can. also note, black often won't directly cut at B, that would be foolish. a stronger option is to play something like C to force the fix and obtain 2 moves on the top side, easily more valuable than the territorial gain from the direct cut. 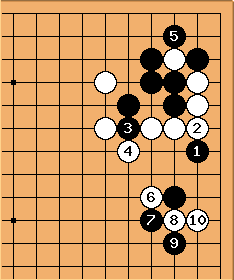 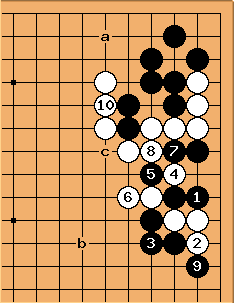 black finishes it off with A and white gets sente. key differences in the outcome: white gets sente, black gote. white has more aji in his stones with the cut at C being more damaging than the previous variation. black getting A ensures that white's wall will be limited since black can use A to jump into the top side at any time. similarly to the first variation, black quickly comes back to play at B because it works so perfectly with his shimari face on the LR. 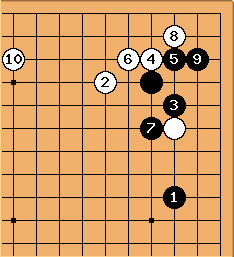 . since black has the shimari face, his global position is favored, however white has made profit while leaving aji.