With the marked stone in place, the followups after

are different from the usual joseki. Black will usually invade at a. If not, then white can easily settle the group by playing b. 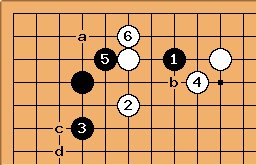 This is probably the most common continuation. Sometimes black will play

at a instead, and white replies at b.

could also be at c or d.

is normally considered to be a forcing move, and so black makes no effort to rescue it. However, some aji remains. For example: 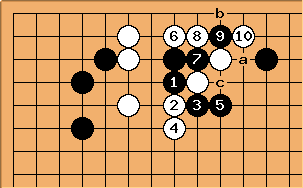 Black can move out this way (black a, white b, black c follow). 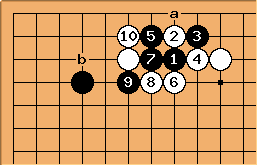 White can also attach underneath black's invasion stone. This is one possible continuation (black a, white b follow).