Given that tenuki is a break in alternating play in some local situation, and a joseki is a set pattern of play (approved by experts), this should mean such a set pattern that fails to go by alternation.[1]

See the tenuki joseki pages index for a list of such discussions. The index has been established with the following aspects in mind.

A sequence Black-Black in a corner is perhaps an enclosure, and that's not really meant by "tenuki joseki". 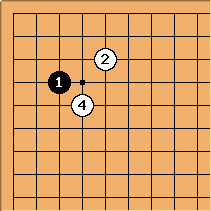 This here is more reasonably identified as the (ordinary) 5-3 press joseki rather than a 3-4 tenuki joseki.

Therefore for the purposes of classification transpositions by tenuki between 3-4, 3-5, 3-3 and 4-5 joseki are probably better classified in their non-tenuki orders. 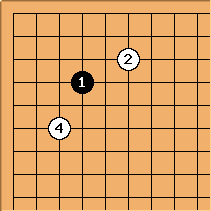 It does however seem more natural to regard this double kakari joseki as being a 4-4 tenuki joseki, rather than a 6-3 joseki. 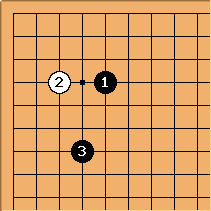 This is an example where tenuki next is actually recommended for White, as a way of showing that

The possibility (always present - tenuki is always an option) of playing tenuki adds greatly to the scope of corner openings. 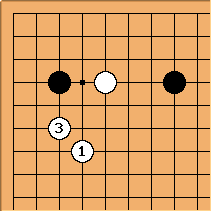 For example Yu Ch'ang-hyeok has been playing tenuki as Black in this position in recent years:

The book Joseki Volume 2 Strategy devotes the four chapters Stability, Urgency, Investment and Playing Elsewhere on the topic to state as the most important these conditions when tenuki is particularly attractive:

[1] For something about when you can and can't break off, see