This article covers those variations of the 4-4 point low approach, tsukenobi joseki that arise from the attachment at

, which is often used in an attempt to settle the shape. 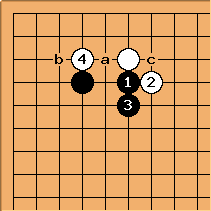 See the appropriate section below for

the wedge at a (was common, now considered to favour White),
the hane at b or
the cut at c (requires a ladder). 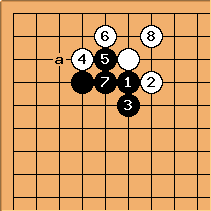 is a common continuation, though Leela Zero suggests it may be better for White and Son Geungi 4p says it (or the continuation in the next diagram) is not seen this sequence in pro games, for a good reason. 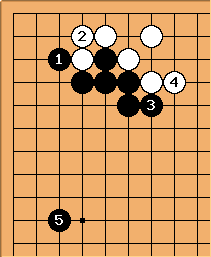 is the most common answer, but tenuki and White at

have also been played. If White does not play

, capturing there is a big point for Black as well.

is a key point for influence, and should not be omitted.

Alexandre Dinerchtein 1p (a.k.a. breakfast) told me in a game commentary, that this Joseki is old-fashioned Japanese style. Koreans would go for cash instead ( 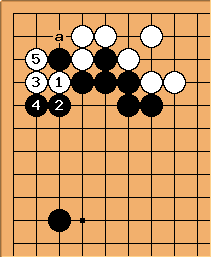 Although the joseki has ended with

in the previous diagram (or

if there is already a black extension on the left side), White is left with the large move of

. The difference between White playing here and Black playing a is 22 points. Still, it is only points, and thus considered large yose. 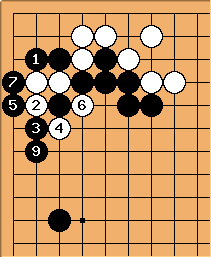 On the other hand, White should not wait too long to play

in the previous diagram either. If Black's position along the left side is more solid, he could play

here, and try to kill the white stones. If White feels unable to resist this variant, her endgame move is at 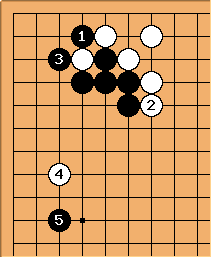 This variant I found in

Jan van der Steen's database and has apparently been played between professionals.

Unfortunately, I do not know what Black would have played, had White run out with

Comment: I don't think White would actually respond in the way shown. It seems to me that

is a suicidal move.

Bill: I suspect that

is a typo for a play at 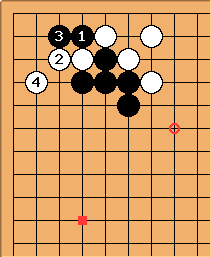 Charles This was played in 1859 by Ebizawa Kenzo against Shusaku, deep in the middle game (around move 100). Looking at the context in that game (the only example in the Gogod database), it seems clear that

would have been played only as a sacrifice to take sente for some large-scale play like the circle or square points. It makes no sense, really, as a joseki play relative to the corner. 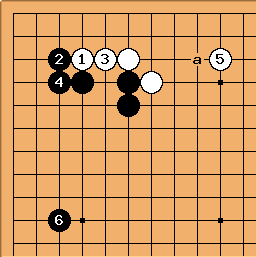 is the hane at

form a very simple variation, after which both players extend with

could also be played at a, and many other possibilities exist for 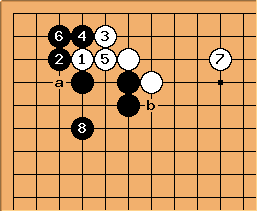 is the other option in this variation. Black should not omit

; this is a key point for both players eye shape. After White extends to

Charles Matthews There are not many pro games in which

is played, it seems. But the variations there are rather different:

omitting the atari, or

at a. I wonder if this line to

is more like a handicap game joseki.[1] In even games White is also interested in pushing up to b. 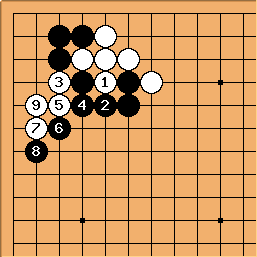 White tries to start up a fight with

, but Black sacrifices the corner in exchange for extra influence. 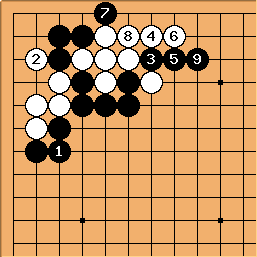 Although White has taken the corner, her territory is surprisingly small  only 15 points or so (White will have to take the black stones off the board). Blacks thickness is much more valuable. 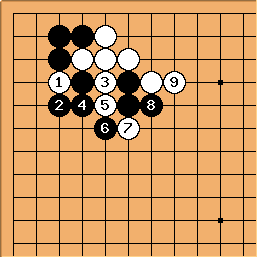 If White cuts with 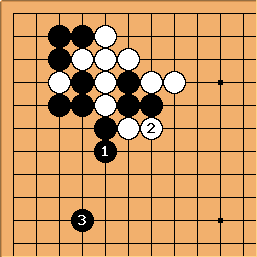 White manages to capture some black stones, but Black gets a nice amount of territory, and can look forward to a ladder block as well. Of course if the ladder does not work, this variation is even more problematic for White. 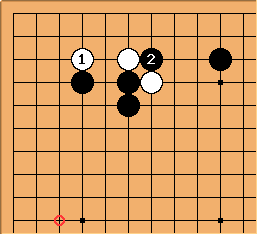 tderz: Black tries this violent cut.
What are Whites good replies?
What is the difference if around 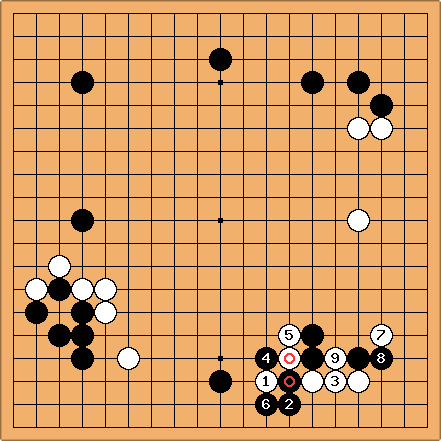 is meant to create some confusion, as Black will have more choices to capture/control the cutting stones

is a serious mistake (atari) as it only helps White to get more levy on the right black stones.
Only

would have done the same job without helping White.

looks like tesuji to me  at least its fun and worth the experimenting. 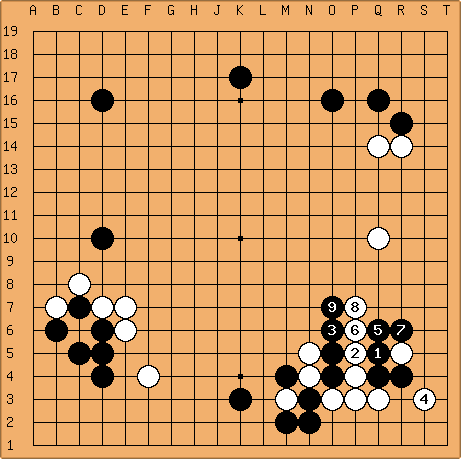 : Blocking at Bp5 here had some really interesting variations, which were feasible for Black.
White survived and is not confined and out with

and has split.
The result is certainly not bad for White. 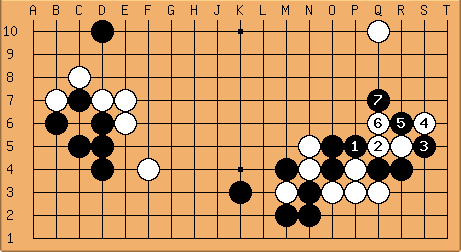 tderz: There exists a tesuji which prevents the ladder
(

=Bq7! .... (White was always forced and Black would have avoided the ladder in sente.

If White then wanted to live in the corner, another ladder could appear on the outside ...
and White had been lost. 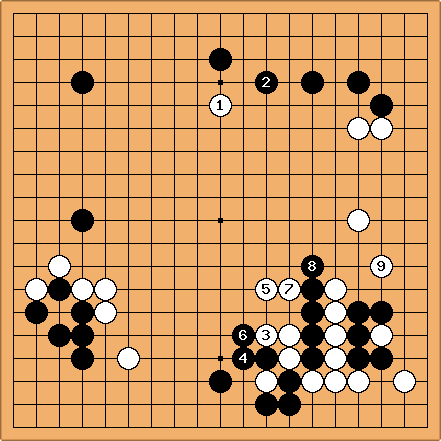 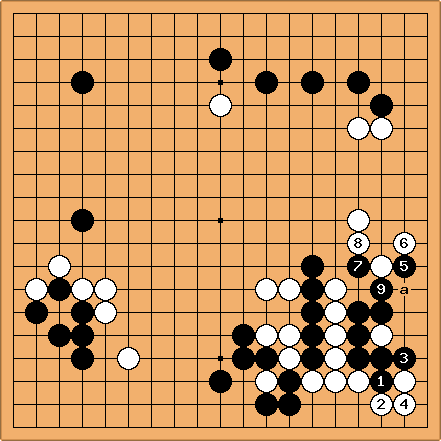 tderz: Black should die or lose his middle stones if he pulls back with 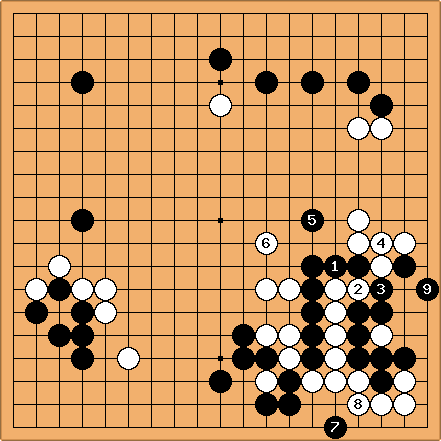 , White had to be sure to win the semeai (against the center group), if Black choses the option

,
as it denies White the option to live independently, while Black is alive. 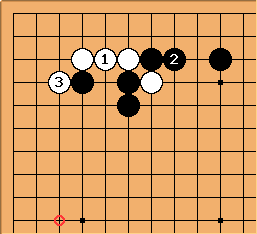 Somebody: How about just taking the corner in this fashion? 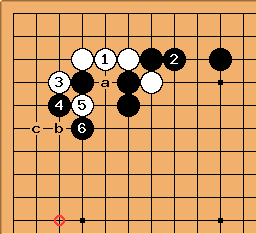 tderz: I disliked the prospects of a light black sacrifice with 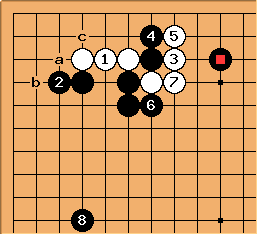 Somebody: Another option for Black, but White has some territory, can get out and the marked Black stone is placed suboptimally. White a next seems like a big move, as b is sente followup whereas Black b becomes sente only much later in the game.
tderz White a is a big gote move at this stage, at best forestalling (reverse sente]; preventing) black a which threatens really big black c (also limiting to one eye). 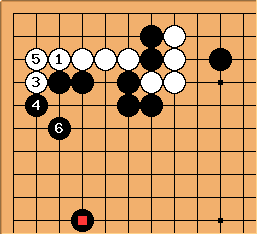 Somebody: The marked stone is a bit too close, but if it's played further away White may play otherwise.
tderz: Black got a sente move 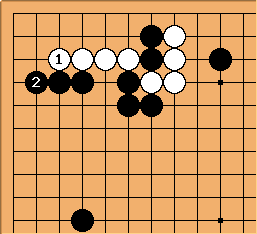 Somebody: White got corner profit in sente.

[1] Bill: I think you are right, Charles. Rui NaiWei and Jiang Jujo make the point in their recent three volume series, New Joseki Around the World (世界の新定石）, that most star point joseki are handicap joseki, and only in recent times, because of the new popularity of star point openings, are new star point joseki emerging with sharp lines of play for both players.