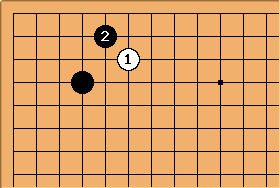 In response to the 4-4 point low approach of

, Black can swoop down and block with 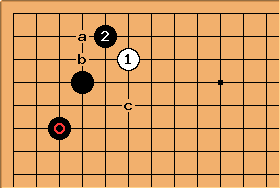 is already in place,

can be played to deprive White of a base on the top in the case where White's position there is cramped, but contrary to what beginners might believe is not effective at making territory. In fact, it's a bit of an overplay, leaving vulnerabilities at the 3-3 point, and the Cut across at b, especially if White gets a move in place later around c. 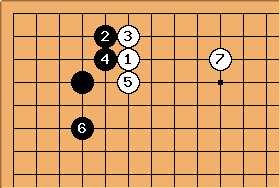 Although it may seem submissive for White to play at

and cede the entire corner, the White group up to

is very strong and is not vulnerable to attacks. White may have the possibility of building up a framework outside. 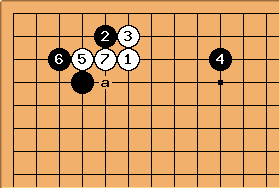 Usually Black will not ignore

, White settles easily with Black's corner being weak. If 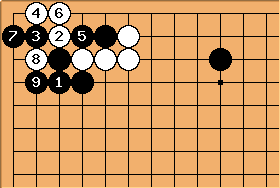 Continuing from the previous diagram, if

connects, then White can play the double hane, and the tesuji at

ensures White captures the two stones in sente. If

, then there is a serious aji at the cutting point at 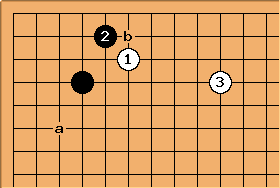 may just extend. In this case, White is treating the

stone lightly, and may aim at a in the future. White also has the choice of blocking at b later to revert to the previous joseki. For Black, b is a very thick move, erasing much of the corner aji] and further depriving White of a base. Black might even move there immediately. 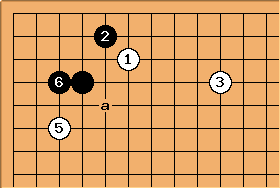 If Black does not respond to

gives Black a cramped corner, and coming out (such as at a) lets White slide into the corner. Therefore, in response to

has some urgency for Black. 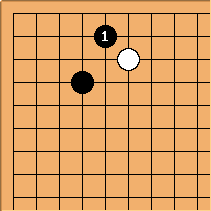 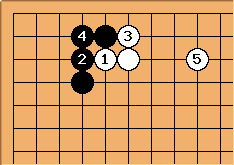 are playable - at least, I see them in amateur dan games often enough, though I don't like them myself - but

Harleqin: Recently I got a very good explanation on this from a strong player. White should just play

directly. Then he has many possible continuations, e.g. also on the spots of

(continuation shown above) or

in the diagram, of which the

in the diagram is the worst. After protecting the corner with

in the diagram. From this it becomes clear that

Alex: Yes, except that usually Black will answer

. So if White wants this result,

first is necessary. It depends on the situation. 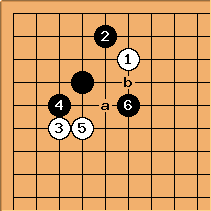 Alex: I'm quite fond of the footsweep and use it a fair bit in my games. My opponents often choose to answer it by making a second approach at

exchange was natural for me, but I then followed up with a the first time I encountered the double approach. Later, I did a search on GoBase and discovered that this pattern comes up once in a while in professional games, but the pro move is usually

here. White can, of course, cut off

, but then he ends up with two weak groups against one, so the fight usually favours Black. Personally, I'm almost always happy if I get to play this way.

Harleqin: This struck me as quite thin, so I did a GoBase search myself. As I suspected,

is mainly played when Black is already strong on both sides, thus making miai of an almost devouring attack on either side. In other situations, Black will rather play 'a' or 'b'. In any case, a complicated fight will likely develop from this, and while Black is usually rather strong in the area if this situation develops, he also has to take care of some bad aji in this corner.

Andy: details from the GoDiscussions.com thread include two videos from Alexander Dinerchtein playing the footsweep against Cho Seok Bin (shown here with Alexander having the black stones). 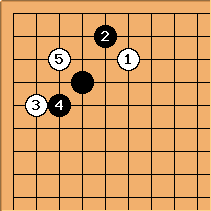 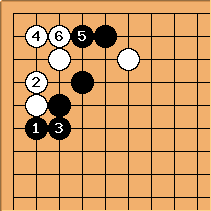 Option 1: Live in the corner 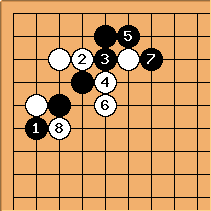