The small knight's extension is very solid and emphasizes a balance of territory and influence. White can slide and share the corner territory, but Black's stones are very robust and can easily form a secure base. Black might ultimately claim less corner territory compared with the 4-4 kick joseki (greedy) or classic versions of the 4-4 attachment joseki (gote), but Black is likely to stay strong and retains initiative (sente) with this extension, which are valuable qualities that will help the player keep momentum later in the game. For this reason, the small knight's extension is the local response that is traditionally favored by professionals and strong AI programs on an empty board during the opening.

After Black backs off, White's main responses can be classified into: (A) asking for the corner, (B) tenuki, (C) making an extension, or (D) seek influence.

Moves are listed by frequency in professional games[1], which is sensitive to whole-board position. Note that the professional game database includes all historical games, so the frequency of the AI attachment appears low, even though it is especially common since the AI era. Bolded moves are commonly considered joseki. 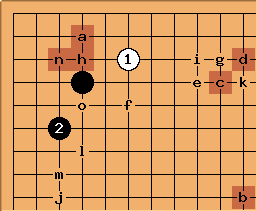 Asking for the Corner

Asking for the corner is a move that White plays to settle their group quickly, and it is the most common local continuation. Black may opt to defend the corner or play for the outside. Typically (but not always), Black will refuse to give away the corner (see: "Corners, then sides, then center"), and both players will share a part of the corner while mutually establishing strong bases. This is considered an "even" result, which is why this is one of the first joseki that many players learn.

Modern go emphasizes speed and corners, so tenuki (23% [1]) and the AI attachment are by far the most popular choices. In fact, in professional games since the AI revolution, tenuki is in fact more popular than playing locally. Many professionals play the low approach as a probe to see how Black will respond.

While it may be difficult for weaker amateurs to grasp, the approach stone is very flexible, and a skilled player has many ways to handle the stone even if Black gets another move. Since this is the case, Black will often play at other big areas of the board until one of the two players choose to return to the local position later.

Tenuki may not necessarily be recommended in this position for beginners, as the player should be confident with their ability handle a weak group before choosing to tenuki.

Extensions from the approach stone have steadily increased in popularity during modern go. While they are typically not the top choices recommended by AI, human professionals have experienced extensively with fuseki like the Kobayashi Fuseki and the Mini-Chinese Fuseki. These rapid extensions favor speed and aim to develop a framework. Loose frameworks are not secure, and while they threaten to develop a large moyo, the opponent has opportunities to invade and reduce later in the game.

White may opt to seek influence or develop a moyo after approaching the corner. Traditionally, these might be considered questionable and situational moves, as White has not established a base and may come under attack. Influence is not territory, and it can be ill-advised for White to commit to a single game strategy. The value of a one-space jump can easily be negated with an effective moyo reduction later in the game. However, strong AI programs typically do not criticize these moves as much as human go teachers.

Ever since the AI revolution, many amateur players copy AI joseki without fully understanding them. Whether AI joseki or traditional joseki is "better" for amateur kyu players is a controversial subject, as strong AI programs are generally better at neutralizing the value of influence than beginners who do not have developed strong invasion, reduction, and whole-board judgement skills. AI scores typically skew in ways that value influence less than traditional human assessments of positions.

A critical detail for kyu players to understand about the AI attachment joseki is that it trades influence for strength. The joseki allows White to settle and create a strong group, but Black has the choice to build a wall in sente. White should not play the AI attachment joseki if they are afraid of Black obtaining a wall, or if the wall appears to be good for Black.

Ultimately, the difference between the slide joseki and the AI attachment joseki is a projected score of 0.3 points.[2] Unless you are playing perfect endgames and never making mistakes, a 0.3 point difference is not a mistake and should not be a significant factor in choosing joseki. At an elementary player's level of understanding, both joseki are equivalent in value.

Rather, the AI joseki should be regarded as the AI's style, just as Takemiya Masaki's style is to play cosmic go. An amateur attempting to mimic Takemiya's style without understanding his full set of abilities is unlikely to enjoy the same level of success.