I think this is a good start but I think that there are other considerations as well. The situation under discussion in BQM22 is playing a pincer against the One space high approach to a 3-4 stone. 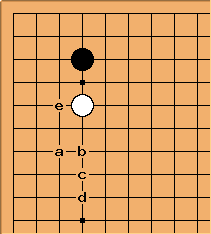 Ishida's Joseki Dictionary considers only four pincers in this situation a through d. I believe that it is most reasonable to consider a a special case. The point of a is the threat to connect under at e. Otherwise low pincers tend not to pose much of a threat to White since the One space high approach stone itself is light. 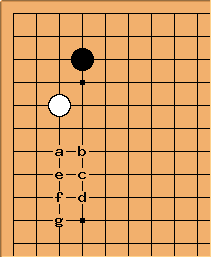 The situation is more complex when we turn to the low approach move. Partly this is historical - the low approach was standard for hundreds of years in Japan and much of the current codified joseki derive from that history. We can find all of a through f in the dictionaries and recently we can see the use of g as well. Historically, a low pincer was the weapon of choice against the low approach stone. I think this is natural. The low approach is fundamentally 'heavier' than the high move by virtue of being deeper in the opponent's area of influence (even if that area is no larger than the corner stone and the pincer). One of the natural escape routes for the low stone is to slide down the side away from the corner. All the low pincers close or at least limit this route.

All of the high pincers are modern moves, basically developed during the twentieth century. They are more concerned with rapid development and overall balance.

The Relation with the Lower Corner

When I choose a pincer in my own games I normally think hard about the lower corner - is it mine or my opponent's, is the position there open (for example a 4-4 stone) or closed (e.g. a shimari)? If the left side is the focus of the game, my rules of thumb:

Unfortunately the pros are very flexible

Figuring out what to choose by studying pro games for hints can be rather baffling! Consider the following uses of the three-space low pincer:

I threw in the last example just so the reader wouldn't think that there was only one answer to the three-space low pincer. :-) Actually it is worth noting that I found the variety of the first four games by searching through a single game tree in Jan Van Der Steen's on-line joseki dictionary. Not only did the players choose the same pincer but their opponents chose the same response! So much for worrying about the surroundings ;-) --Dave