4-4 Point Joseki are standard sequences of moves played around the 4-4 point that result in a locally even exchange. Joseki related to this position can be classified into approaches, invasions, enclosures, attachments, and extensions.

The 4-4 point (aka hoshi or 'star point') emphasizes influence, speed, and flexibility. Compared with the 3-4 point or 3-3 point, the corner can still be invaded and the territory is not secure. In modern go, it is one of the most popular openings (~60% frequency[1]) and preferred by strong AI programs like AlphaGo[2].

Popular joseki related to the 4-4 point have evolved over the centuries. Some of the patterns listed in this reference are no longer considered "joseki", but the viability of unusual moves is highly sensitive to the surrounding board position. The difference in winning rate between traditional and modern joseki is often less than a point, so many old joseki are still valid and playable particularly at the amateur level. 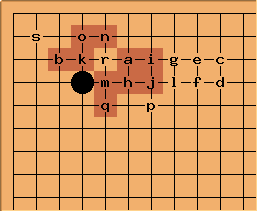 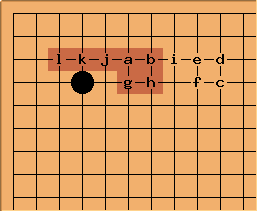 Ever since the AI revolution (c. 2016), the 3-3 invasion has dramatically increased in popularity since it is often a preferred move by strong AI programs. The 3-3 invasion trades influence for territory, and it can be a good move for players with a territorial playing style.

Traditional dogma prior to the AI era was that the early 3-3 invasion was bad for the invader, because the loss in influence is not worth the limited territorial value of the corner. This notion may still be true for weaker kyu players who have not developed strong reduction, invasion, and fighting skills. Beginners should be wary of blindly invading corners without considering the overall board position and knowing the subtle differences in 3-3 joseki recommended by AI.

Strong AI programs tend to assign similar value to approaching and enclosing symmetrical corners.[1] Approaching corners is typically more popular among most players, but it is mainly a matter of playing style and personal preference.

Approach on the Open Side

See main article: Approach On the Open Side

Under traditional opening theory, approach moves should be played from the widest side. For example, in the sanrensei fuseki, attempting to play the knight's approach from inside the formation is like jumping into a loose pincer, and it will often result in a cramped weak group.

Similarly, enclosures should be played to prevent approaches from the widest side.

These aggressive extensions are one reason why loose corner approaches are made by professional players. Although the distant approach may result in a local loss in the corner, the wide extension threatens to develop even more territory along the side.

Third-line splitting moves near the side hoshi (hoshishita) are a common and traditional way to develop a base along the side. Playing off-center, particularly on the hoshiwaki can be advised depending on global board position.

When a 4-4 stone has an existing enclosure, there are different considerations for approach and invasion joseki. The knight's move low approach may not necessarily be an ideal move.

The first experiments with the star point were around 1840 in Japan; its first appearances in pro games date to the early 1900's. Its rise to preeminence came during the 'New Fuseki' movement in Japan in the mid-1930's.[3]