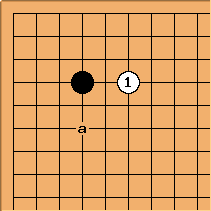 The high approach to the 4-4 point at

is extremely rare in professional play, and is usually played as part of a special strategy, most often with the intention of setting a framework on the right of

. One characteristic of this high approach is that it tends to give black a sizable amount of fixed territory.

The common answer by black to

will be a. This could be described as a situational joseki. 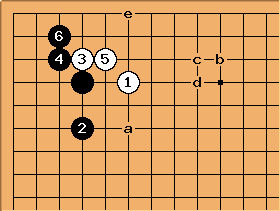 is one common play.

aims to reduce the corner territory,

is usually either played up at a or as an extension to b, c or d. Because of the monkey jump at e, white's territory at the top cannot be said to be large.

For an example of a context in which it is good to play this approach and the upward move of a, see Side Pattern - Rin Kaiho's Onadare And 4-4 High Approach.

To see how large the territory black gets truly is, we can compare the position with the following common 4-3 joseki:

As we can see, the black stones

in this position are all one line lower than they are in the 4-4 joseki on the right. This means that in the 4-4 joseki, black gets about 5 points extra (the marked points) compared to this 4-3 joseki, which explains why it is so rare. White must be certain that building up a framework with the high approach is worth at least 5 points extra. 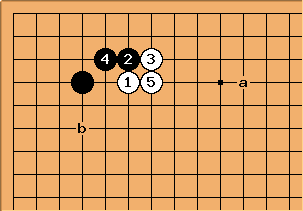 , but it is played quite rarely, usually only when black already has a stone around a and can attack the heavy white group, or when black has a position there and becomes somewhat overconcentrated

Chris Hayashida: I have seen a similar pattern in pro play, where Black plays b as an answer to

. White tenukis, then Black attaches underneath at

and then draws back to

. The shape ends up looking similar. I don't think pros would play this way if the 3-3 invasion was a problem. 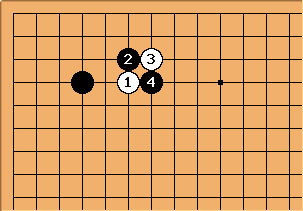 Got this in a game the other day. What would you do? Black has a stone on the left and white one at the top...

Black plays on the 4th line to avoid being pushed against the side. An invasion at san-san is not gauranteed to live either. I may be misrembering but i'm fairly sure a shoulder hit kills it. Even if the 3-3 lives Black takes the side in sente ;-)

aLegendWai: I am too fascinated by the invasion probelm at 3-3. And I seem to miss all other valid points and ask this question at the spot :< According to BobMcGuigan, the best B can do is ko living. But a ko living seems bad to B. It is a nothing-to-loss ko to W. W loses nothing if losing the ko. B loses quite big if it loses ko. I would consider it is still not good to B (but worse than the case that W can live unconditionally). A line lower is preferred if the corner is vital to B.

BobMcGuigan: I'm not sure the sequence shown in the previous diagram should be called joseki. The problem is that Black's territory in the corner isn't secure and White's stones on the top have been strengthened. And there is very bad aji in the corner, for example: 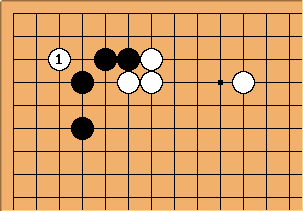 There are many variations after

but the best black can do is get a ko or else leave very bad aji. Here are some illustrative diagrams: 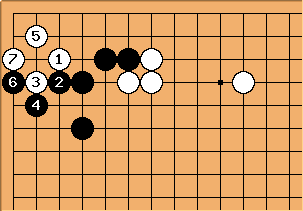 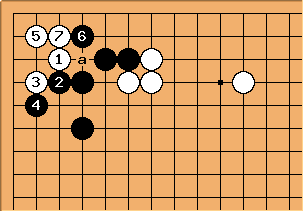 Now a white move at a looks troublesome. 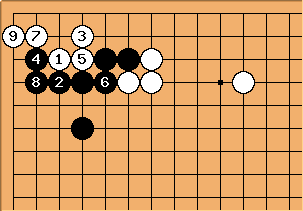 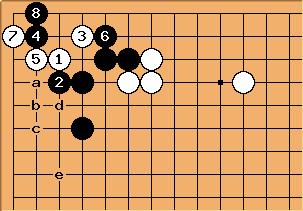 White has the aji of the moves a through e and Black may prefer the results in one of the earlier diagrams.

So I doubt that the attachment underneath is really a joseki unless the surrounding position is right. 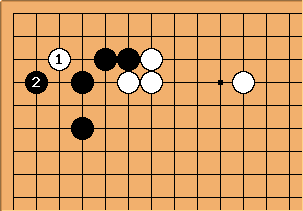 Chris Hayashida: What about the shoulder hit that was mentioned above?

Velobici: It may be that the attachment underneath is a misapplication of the well known 3-4 point one space high approach joseki. In that joseki there is less room available to White should he decide to invade the corner, as a result Black's corner is secure. 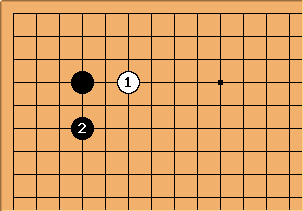 If White strengthens herself, as in the second diagram on this page, Black still gets a lot of corner territory, with no bad aji. After attaching underneath it would be bad for Black to remove the aji of the move at the 3 - 3 point right away as that would be gote and White would have been strengthened. 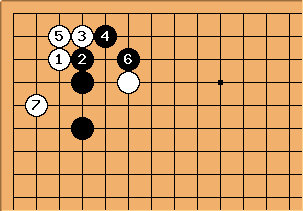 is in the wrong place after the 3-3 invasion. Black makes good shape with

Sanz: I saw this type of "punishing move" in a book. a would also work. 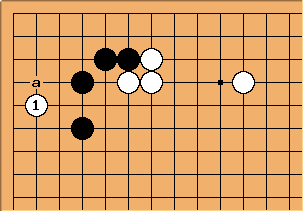 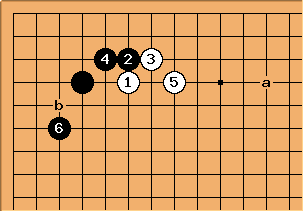 IaGo: my dictionary suggests this, with a possible extension at a, and

being possible depending on ladders...

It seems a little more secure in the corner.

Charles I don't see any examples of this by pros.

is low in position. What if

How about 6 at b to make the ThreeCrows? Too overconcentrated?

unkx80: Thanks all for correcting my misconceptions on this joseki.

Kirk: What about pincers? In particular, the low one-space pincer at a always seems to cause me trouble. I generally play the one-space high approach when I have influence in the upper right (facing left), but this low pincer always seems to disrupt my plans: it prevents a large moyo and is hard to attack when the thickness is so far away. 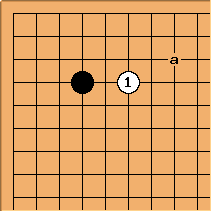 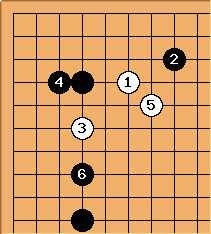 Kirk: Here's an example from one of my

dragon games. Any suggestions for a good continuation after c12? 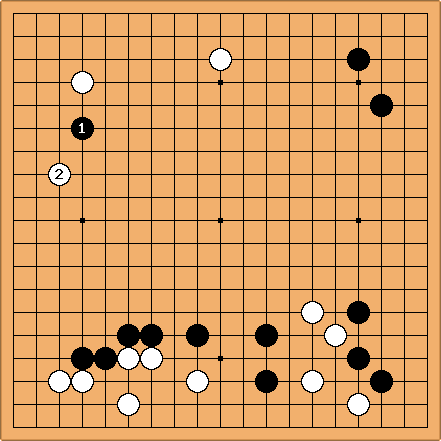 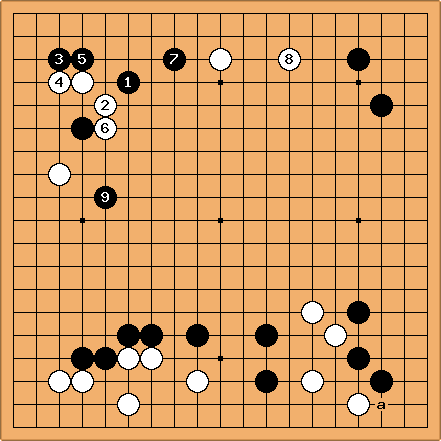 Kirk: Here's one continuation I considered. I guess this result is okay. As black, I'm very concerned about utilizing my influence at the bottom, so I don't like white to get a position on the left. Nevertheless, the thinness of white's position at the top coupled with the fact that I can probably engineer a splitting attack against that and the lower right white group (after a) makes this look playable. 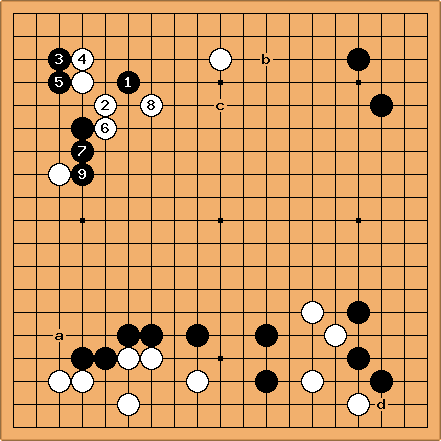 Kirk: Here white blocks on the other site. I'm not sure 8 is right -- actually there doesn't seem to be a good shape for white here. White still seems to have a lot of potential on the left, and black's influence still isn't doing anything. I guess a-d follows fairly logically (at least to me! :-) 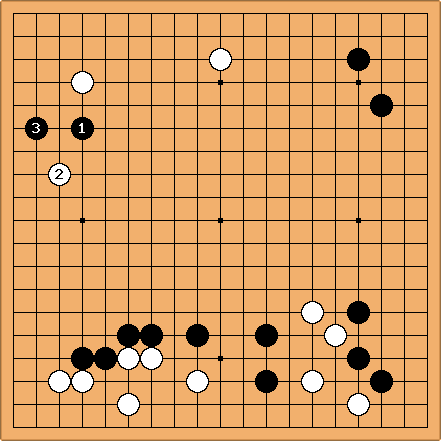 Tiny81?: Kirk, did you think about continuations followed by 3?

Sinprejic: Another response to the high aproach that I just ran across and had difficulty with is 4-4 High Approach 2 Space Wide Pincer. Perhaps someone would like to help me find the correct response to this? 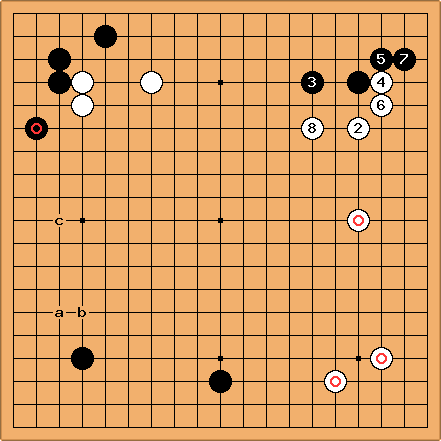 Here the high approach at

makes sense, but a is preferable to b because there is not much for white to develop around c.