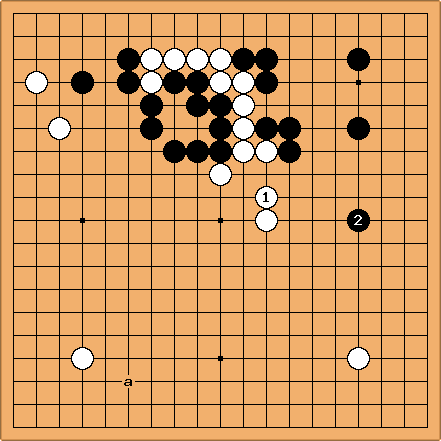 This is a game on KGS after move 43. Black built a box in the upper right corner and attacked the White group on the top as answer to the double approach. White suffered but managed to escape. White felt behind and played

to become strong and get the initiative.

Tapir: Black looks overconcentrated in the upper left, the upper right is big but not territory yet. The white group happily escaped and isn't weak / even strong after

and it's strength is directed to the more interesting areas. White made sanrensei with

and had nothing to worry in the game. But honestly, all this said, I would estimate Black being ahead by a couple of points. What do you say about this position?

Velobici: Black 2 is a big point?

does not gain territory for Black nor does it attack the White group. Neither is

is either urgent or big. White is behind in both territory and power (to use terms of Attack and Defense). Whites stones are splitting two strong Black groups (top center and top right). Splitting strong groups is not useful. Rather than

is certainly not the best point, it is surely big... a white stone there would work well with the starpoint and the group in the middle, no? How the situation arise? Black build a box, while white made a two-space extension on the top. Then white approach the corner, black attached, white extended, black extended, white slided in the corner, hoping for an answer... black didn't but attacked the white group... white barely escaped. I think that white is behind as well... but I can't say by how much. (But I'm happy that I did take the time to strengthen my group with

.) The white stones don't do much work... splitting strong groups, but black captured 3 stones with ten stones, this isn't very efficient either (better than only escaping for sure :) 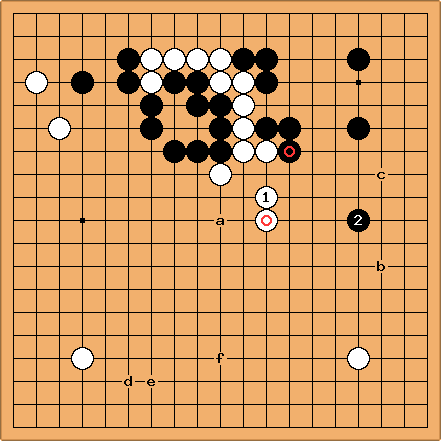 are too close to thickness, or at least not very efficient.

shouldn't have been there at all". In Go, you must make maximum use of existing stones, not treat them as if they shouldn't be there. If White wants to patch up the group's thickness, a play at a is more efficient.

did not mind about being overconcentrated,

doesn't care about the combined strength of

. There is no development possible for

towards the centre and if

approaches at b, then an invasion at c is threatening.

now, I would hesitate between e (being biggest) and b (being more active) with a final vote for e since it is difficult to prove it wrong.

FredK: "But I'm happy that I did take the time to strengthen my group with

. To put it a little differently from the analyses already given by Velobici and Dieter, playing near a live group is small.

is near two live groups, B's and W's. As stated above, the bottom is wide open and ripe for development (and far from live groups).

As for Dieter's choice between b and e for

, it seems to me that after a W move at b the threatened invasion doesn't threaten the life of B's group, but a move on the bottom will then have become even bigger and B would grab it. So one could make the positive argument that W should therefore play there (at e)first, and not play near already live stones at b.

Tapir: While I appreciate all comments, I'm indeed happy that I now do take the time to strengthen weak groups, which allowed me to play actively afterwards. If you take into account that

was basically an answer to the marked black stone, the marked white stone still looks misplaced, but isn't

at least superior to the marked black stone? Any comments on

at f which was my move in the game? Does anyone dare to make a numerical guess? How many additional points do you need to prefer white?

Dieter: To answer the last question: I count Black's upper left as 40 points which are 75% certain, so 30 points. The central groups have comparable influence with a small advantage for White. So, if next comes a san-ren-sei, I'd say White has already overcome the komi.

But these estimations seem to miss the point. Therefore, another diagram. 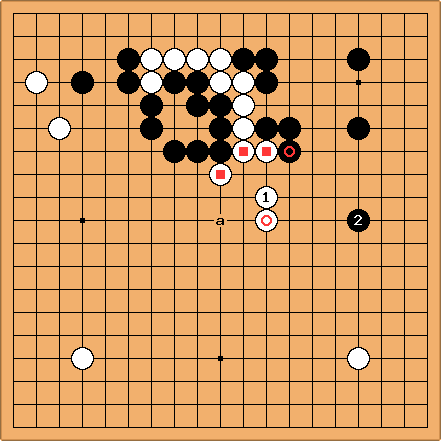 A simple connection, without any enemy stone at all touching it, in the centre, is strange.

has almost the feeling of a pass move.

. Maybe the local shape of

is too familiar to realize how inefficient

If you are happy with taking the time to fortify somewhat floating groups, then try to maximize the work done by the stones and play

at a: it influences the centre and bottom bigtime. 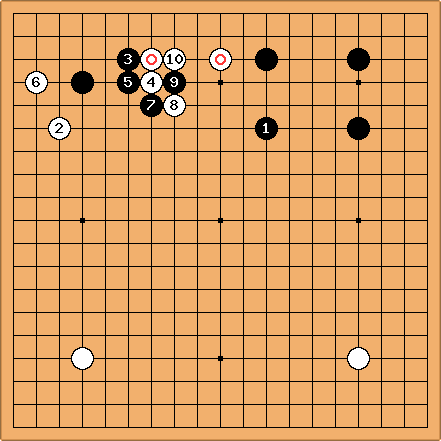 Velobici: Agreed. The two marked White stones are not strong. The slide to the left gives them better shape similar to that shown in the Distant low approach fuseki diagram on the 4-4 point Josekis page. Would hesitate to invade at the 3-3 as Black will block on the top further weakening those two stones.

, not letting Black hane at the head of two stones?

because I thought white making a hane here doesn't work so well. But

is an example of greedy play and wishful thinking (I hoped Black will respond at sansan). 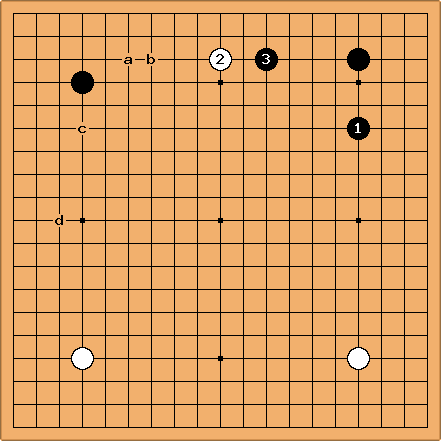 is an unusual move which occurs rarely in professional play. Yu Bin appears to have tried it several times in 1995 leading to games with the position shown above. At that point played either a or b. In each case, Black responded on the left side and played the one space jump down the left side from the handicap point stone (at c) either immediately or after an intervening move at d. However, it appears that other professionals did not adopt Black's play of

occurs about as the fifth move in only about a dozen games from 1995 till now (as of February 2008). See also 3464 Enclosure Statistics. 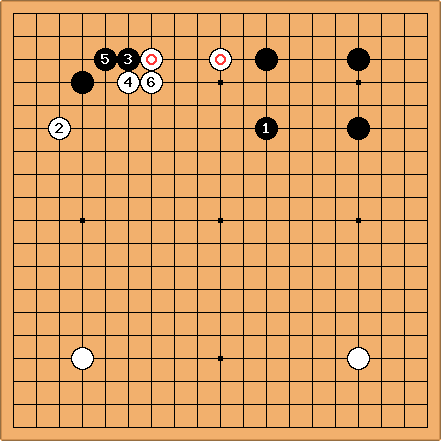 is "wrong". The result looks okay after

Tapir: I feared the crosscut here. That's why i simply stretched.