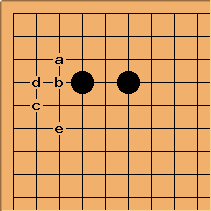 The one-space enclosure based on the 4-4 point. The 3-3 invasion at a lives for White (with some marginal lines). See 4464 enclosure 3-3 invasion for an example. The contact play at b is another good way for White to play here.

Further ideas are White coming in on the second line at c or d. If White plays at e, she can expect the attack with the diagonal attachment: the other techniques all try to avoid that, when it is a heavy way to play. 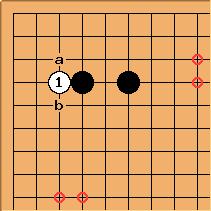 as a way to enter the framework, it is probably the case that Black has stones in the direction of the circled points. The idea of

is to live or make sabaki here more easily than with the 3-3 invasion: the presence of other black stones affects the decision in tactical and also strategic ways.

White expects the answer Black a, or Black b, according to the importance of the corner or outside. In pro games each is played about 50% of the time, rather suggesting that

is played when it sets Black a problem to decide: so

has some kind of probe status. 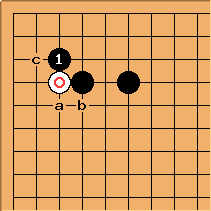 is played, White's major idea is to play out at a. White also plays at b, which is more like a sabaki technique, or attempt to force Black. White at c is something of a new technique, appearing in some recent pro games. 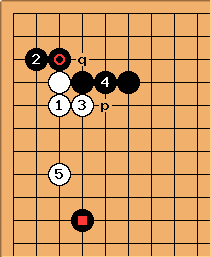 can be assumed: then

is a play that could be missed. The answer

is solid: Black at p is seen too, but that leaves White the cut at q to aim at. Assuming

builds a base inside the original framework. 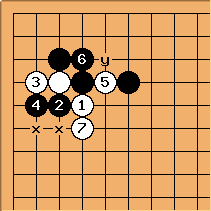 is played as hane on the outside, this is the main line as seen in pro games (

is also known). After

White has succeeded in creating a fight here, with options of forcing at the x points or pushing down at y. Of course this fight holds some dangers for White, too. The exact positioning of nearby stones will now affect future developments. 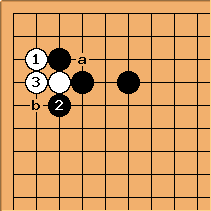 here is probably to insist on part of the corner, when Black has opted to defend it. One expects

. Then Black decides between: Black at a, with White forced to seek life on the second line; or Black b which challenges White to live small, or use the cutting points in some other way.