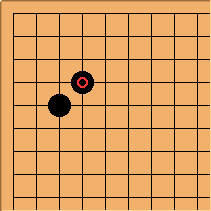 The assumption is that this is made from the initial 4-4 point.

This is a standard way to reduce a framework based on 4435. The 3/4 exchange may sometimes be omitted. 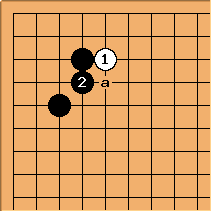 Starting from the 3453 enclosure,

, rather than Black a, is possibly too steady (though one can hardly call it a mistake - it's one possible answer to this as middlegame joseki). This accounts for White's willingness to force Black in the reduction sequence. 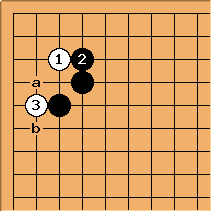 Calvin: Another idea which is common in pro play is for white to invade at the 3-3 and then attach at

The 3-3 invasion in this position cannot live, but may be useful in other ways. Sometimes it can function as a probe.

gives White a big endgame play at 3. Black needs another move at a to secure the corner, so this should be played in the early endgame, when it ought to be sente. 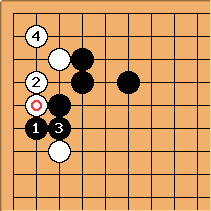 If Black reacts on the other side to the marked play, White gains life in the corner. 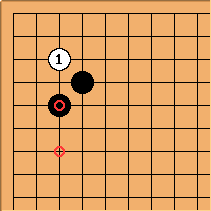 The case in which White has stone at

is often played in response to this approach. But even so, the invasion cannot live (Timm: strong player please check this). 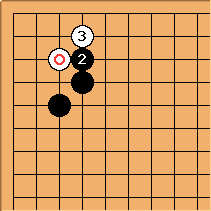 . Then White can try the hane at 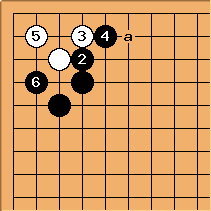 White cannot live locally, but there is bad aji at a. 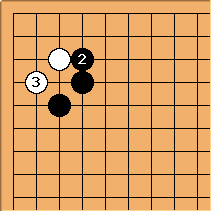 White can also try the diagonal move at 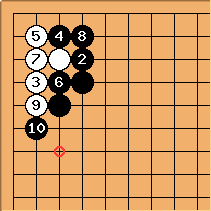 , there is no escape

tapir: A white stone at CC threatens to connect out. 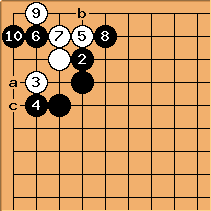 , a and b are miai for black. Note, however, that if white can play the hane at c in sente then white can live after that with b.

White can also choose to play

, allowing black to cut. That way, white will lose the corner, but may live along the top side. 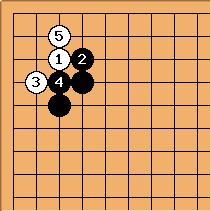 is bad. White is alive after 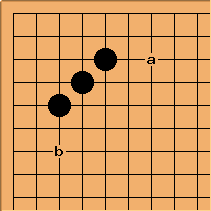 This formation may arise from the 4435 enclosure, usually with at least one white stone at a or b. It is known as the Three Crows. 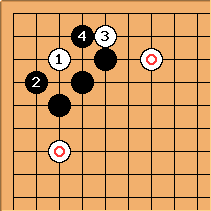 stones in place, the invasion at

is something of a concession (see two diagrams above for the reason, in a related case), but the corner is then safe enough. 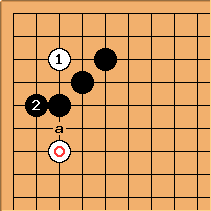 in place, Black can try

(or Black at a) in reply to

. The feeling is then to avoid being forced, and make

That is at the cost of some bad aji here for Black. In pro games

can be played as a probe.