Black should resign if one player has four corners

They are tongue-in-cheek statements based on the fact that normally White is a stronger player than Black.

An example of a pro game where Black has four corners and loses the game: the first game of the Kisei 2003 between O Rissei and Yamashita Keigo. See

Dansc: Well, technically black only has two corners there, the other two are dame. :)

See also Proverbs Do Not Apply To White. 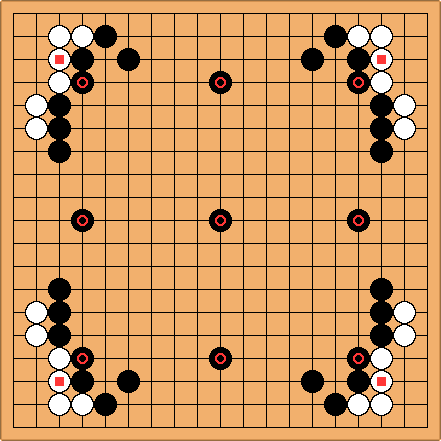 Besides, if white player invades the 4 sansan, black might want to resign (because of the proverb) despite the fact that he's probably ahead, as shown on this diagram.Guillaume Chanson?

kevinwm: But this example misses the point entirely. In a 9 stone game, no competent white player would allow this situation to occur. Sure, he might start by taking one corner, but would never allow b to create the tremendous center shown here. If w did manage to get all four corners, it would probably be in addition to a nice sized living group in the middle....

se: I have to second kevinwm. What proverb is accurate every time? The point is that in most games, especially amateur games, most proverbs will hold, and are worth keeping in mind. This proverb reminds black not to overvalue the corners. 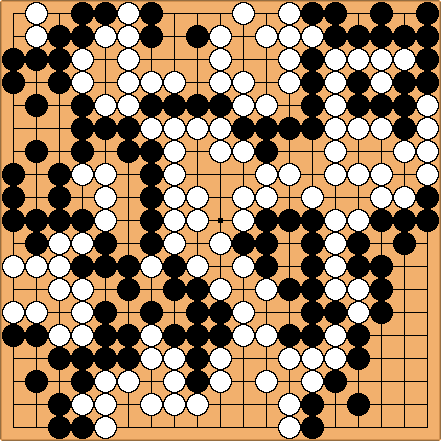 See also the alternative (is it maybe older): IfYouHaveLostFourCornersResign

I will point out WuRenGo2.