The presence or absence of a ladder breaker can be an important factor when choosing between variations and whole board strategies. For example, many joseki involve ladders and are known for only being playable when these ladders are favorable. Therefore, the presence of stones around a board, even during the opening, can play a significant factor in choosing joseki.

When a ladder breaker is played in the presence of a pre-existing ladder, it is often a dual purpose movesimilar to a ko threatthat either allows a ladder to be favorably resolved or makes a nearby local gain. The opponent must, therefore, decide whether to answer the ladder breaker or resolve the ladder, which may create a non-trivial dilemma. For this reason it is often said that a player should capture stones caught in a ladder at the earliest opportunity and capture stones in a net, rather than in a ladder.[4]

An inline ladder breaker functions as two consecutive plays out of the ladder. It produces the extension, an easy escape. The inline ladder lies on the circle marked points.

at a breaks the ladder.

at b invalidates this defense, becoming a piece of the ladder.

Notice that this stone connects to

by Diagonal, becoming impossible to cut. Black should produce a net if possible.

The defensive ladder breaker blocks Black's path. By blocking the offense, it provides a defense rather than allowing White to run.

JohnMoser: What does this say about territory influence if Black plays the ladder out?

into atari. White at a would capture

, while b would capture

In this particular sequence, White lives immediately; in many situations, White has a difficult fight. In some cases Black can still kill the White group, for example if the ladder is enclosed in Black territory. 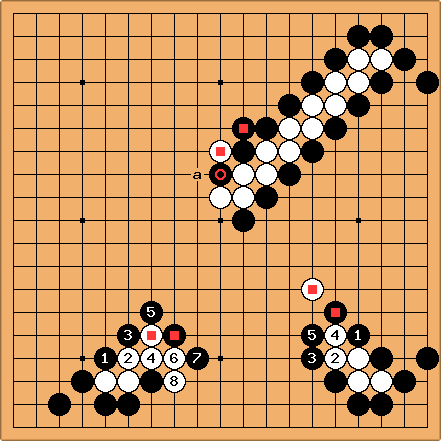 Note that Black in the Offensive ladder breaker path provides only partial protection: further playing out the ladder will capture

unless Black also has a stone at a. By contrast, notice the defensive ladder breaker (lower right) produces a capture if a Black stone precedes it. The inline path provides more complex considerations.

JohnMoser: I could write a lot of examples about playing ladder breakers; but the reality is that eventually a fight becomes bulky enough that you need to extend toward your laddered stones with your last threat, and get a non-interfering answer. The long and short of it is to try to get influence and possible life if being driven through your ladder's path, then tenuki to the ladder. You might lose your attack; but if you can live over there and run your escaped ladder towards life, you'll significantly reduce your opponent's territory. This is why you net or capture ladders as soon as possible. 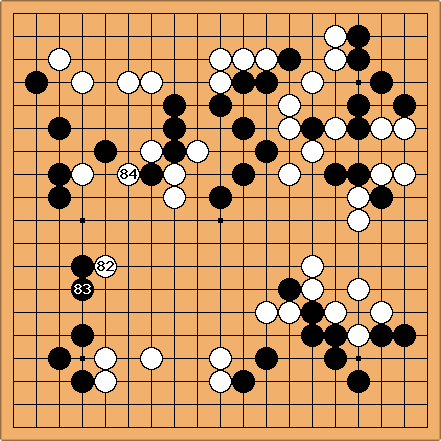 In this game, between Takagawa Kaku and Go Seigen from 1955, part of the last jubango Go Seigen played, Takagawa plays

as a ladder breaker, in preparation for the ladder he starts with

is not a ladder breaker. Read the definition in Modern Joseki and Fuseki vol. 2, p. 340 (second bold face by me):

"shicho-atari    a shicho breaker; a stone played in the path of the shicho threatening to render it ineffective". [2]

does not spoil a possible ladder, it enables one. It's a, say, ladder catcher (block already is misused as alias).

Another reason to distinguish them is that a ladder catcher always threatens to let the ladder succeed because the driving player can direct the ladder towards it, whereas a ladder breaker might not threaten to let the ladder fail because despite spoiling some paths, others might still work.

Herman: The literature is divided. E.g. John Fairbairn's Invitation to Go, on page 31, says: In Diagram 42, the white stone already played at

lies in the path of the ladder [Herman: ladder capturing white stones], and is therefore known as a ladder breaker. You can see its effect in the next diagram. This stone provides the extra liberties white needs for survival, and now Black's position is in tatters, with cutting points all over the place e.g. at 13. [3]

If it is black to move in Diagram 42 he should capture the stones at once. He can also consider putting another ladder breaker, a stone of his own colour, in the path of the ladder, but White can do the same, and the position becomes very complicated. [3]

The last sentence considers stones of either color as potential ladder breakers.

There is a similar ambiguity, I've noticed, in a phrase like "Black can play A because the ladder works". This might refer either to a ladder capturing a white stone successfully, or to a ladder which fails in capturing a black stone. The term "works" is confusing (this might also be phrased as "the ladder is good" or similar things).

Bill: As an English native speaker, I talk about ladder breakers and ladder makers. It is definitely weird to think that there is only one term for either one, that ladder breaker means ladder maker. The Japanese Wikipedia agrees that a シチョウアタリ serves to save the stone in a ladder or threatened to be taken in a ladder. I can see how atari might indicate a stone that lies in the path of the ladder or touches it, of either color. But that's not what breaker means in English.

Dudley: Common usage complicates things further, since we tend to simply state ladder breaker without including the colour (for black). My first try at a definition would be: A ladder breaker is a stone which, were it not present, would alter the status of a ladder for either side. I have never heard the term ladder maker used before. Does anyone apart from Bill use it?

xela: Yes, I've been saying "ladder maker" to myself for many years, but haven't previously seen it in print. Most native English speakers will be familiar with the common phrase "make or break", so I'm not at all surprised to learn today that Bill has independently come up with the same term.

RP: Fully support Bill's ladder maker and neither care about the literature nor the crowd. See also BQM 265 for another.

There are certain plays that are a long way from being part of joseki, and which are expected only in the context that they are ko threats or ladder breakers. 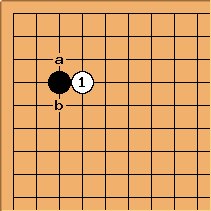 here is much too violent to be useful as an approach move: the

stone will suffer from a local disadvantage if Black answers here.

On the other hand if Black has to ignore

for tactical reasons, and White can play hane next at a or b, White will have the upper hand locally here.

There is an overlap between plays that make good ladder breakers and those that are good ko threats, therefore. And if these plays are ignored, the same sorts of local follow-ups will apply. In general fighting a ko is much more complex in its implications.

There is a difference, though, when one considers what the other side (Black in this case) can do to resist. In the case of ko fights, answering is just what the opponent counts on. 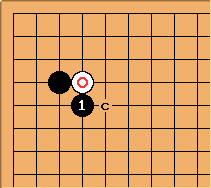 Here it would depend on the actual ladder whether

made the ladder good again for Black. If White continued at c in another attempt to break the ladder, the game will undoubtedly become difficult. These resistance fights are hardly mentioned in books: probably they are an aspect of pure strength.