Approach on the open side

When in doubt from which side to approach a corner, it is usually better to take the open (or wider) side, i.e. the side where there is more space to make a base and/or more potential territory to be destroyed. This is conventional wisdom and hence often defied these days, as can be seen in database search. 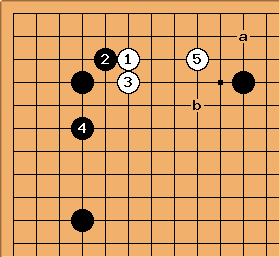 Here, the upper side is wider than the left. Although White's position is said to be slightly overconcentrated, still he can extend to

with satisfaction. He has possible follow-ups at a and b. 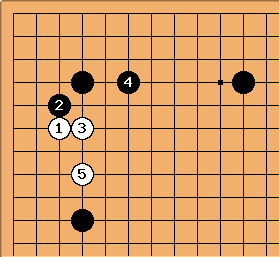 If he enters on this side however, his position gets really cramped. Here, he can easily be attacked.

So, invade a framework where it is easiest to invade. The logic that says invade first in a narrow space, so that later you can invade the broader space goes wrong if the opponent defends against the invasion in such a way as to consolidate the broad side.

Approaching on the open side 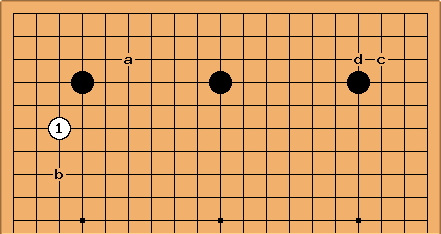 This idea applies also for dealing with the opponent's framework from outside (when there is a free boundary).

here, on the completely open side, is better than at a: in the latter case White will definitely get a weak group to defend, while with the open side White will possibly get a strong group on the outside.

Note that White cannot constrain Black's strategy here: Black may choose to pincer at b, in which case White will not be able to get a strong group. Instead White will take the corner or set up a running fight on the outside, the former being orthodox. Therefore the idea of the open side approach is related to flexibility. Black has played three times on this side before White plays a single stone. It is reasonable for White to allow Black some control of the direction of play. If White invaded at c Black would definitely play at d. White would be dictating the direction of play all right, but at a cost to her strategy. Don't push your opponent into good moves.

Hyperpape: This page uses 4-4 point examples (and presumably the same thing applies to the 3-3 point) but I just had the realization that you might categorize several plays against the Chinese Fuseki as falling under the same principle.

MrTenuki: Are you thinking about the various approaches to the 3-4 point "from the wrong direction"?

Hyperpape Them are the ones.