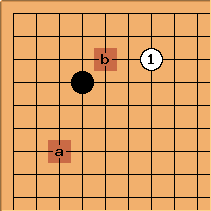 The distant low approach of

against a stone on the 4-4 point is not a very usual approach move. In most cases White would prefer a normal low approach. Black usually plays a or b.

The distant low approach usually appears after a wedge such as

is a natural extension from

but going a space further is possible. 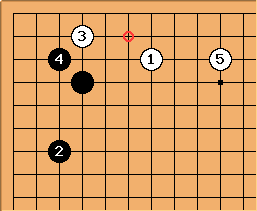 is a calm answer to the low approach aiming to take a good portion of the corner and expand to the left side. White typically slides into the corner with an ogeima of her own and then makes a solid base with

. In case there already is a white stone at

It should be noted that White's slide is rather thin and Black has a good follow up at the circled point. See 4-4 point ogeima slide follow up. 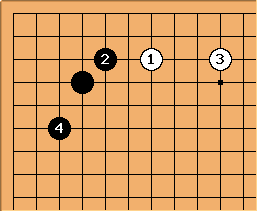 very clearly aims to take the corner territory. White will usually extend along the upper side at or around

. Black then secures the corner with 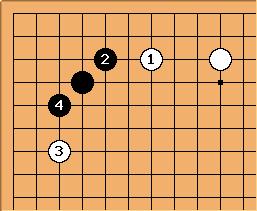 , she can play at

or one space higher aiming to slide into the corner. If Black plays

the corner is completely secure (see three crows) but White did get to develop on both sides.