This is an introductory lesson in attacking aimed at beginners 26 kyu to 18 kyu. 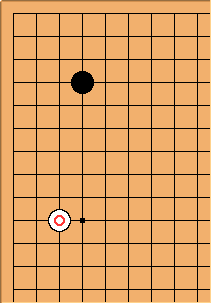 Let's say you're black, and you want to attack the white stone there. 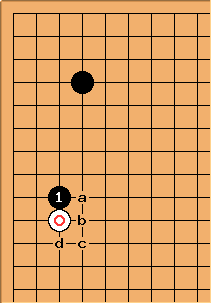 The first thing that most people think of when they want to attack is contact. Real-life fights involve contact, right? Hitting, punching, kicking, etc.? So, why isn't 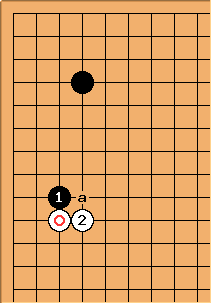 The problem is that, after

, White will extend at

. Now, White has two stones to Black's one. White is twice as strong as Black. White has 5 liberties to Black's 3. We can see that, far from weakening White,

(Just to make things even more complicated, instead of

, white could also play the hane at a.) 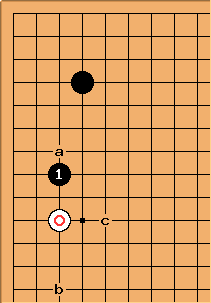 A better plan is

here or at a. Why? Because it threatens to take away White's base on the side. Without a base, White will have a harder time making eyes.

White will probably make a base at or near b (or run into the centre by playing at or near c in some circumstances), but now notice the key thing:

remains a useful stone after white defends (it works with Black's corner stone, making a framework on the side). Black gained something in the process of attacking.

Now, let's look at an exception. 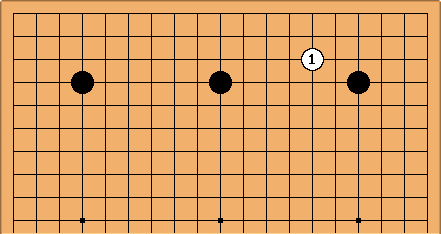 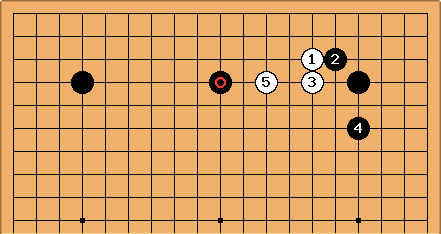 , a good move. But wait! It's a contact move, and we just said not to play those when attacking!

The key thing to learn here is that

is not actually the attacking stone.

is played as a kikashi to make white

in a position where

is attacking white. It is making it hard for white to get a good base, and white makes only a cramped shape with

. (This can work even if

is not on this exact point.)

Compare the next position: 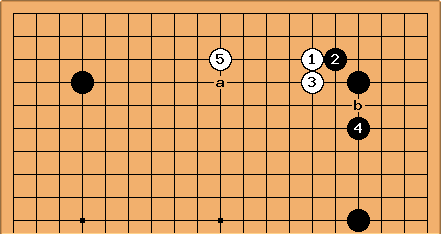 Without a black stone near a, it is a mistake for black to play

. White has room to make a base on the side. There are better ways to respond to

. (What if black doesn't play

, but attacks white from the other side? Then white has some tricks, starting with b.) 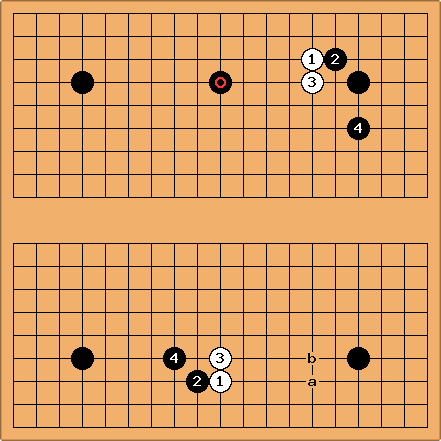 On the top, white is heavy. There isn't space for white to make a cozy base.

On the bottom, white is strong. Black played

to try and save

, but now white will play a or b, making a big base while attacking Black's corner at the same time.

In neither diagram was

an attacking move. On top,

makes white heavy, and it is part of an effective attack, but

is the attacking stone. On the bottom,

is a very bad move; White will become strong and Black gains little in exchange.

To make an effective attack, you must threaten the base or eyeshape of your opponent's stone.

Always attack to gain something else.

(To do: make some links from other pages to this one)

[1] Here are two common beginner continuations, both bad for black. 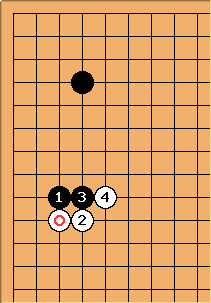 See hane at the head of two stones. 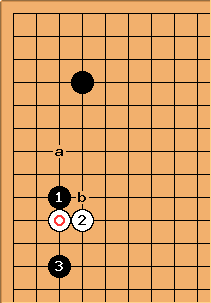 at a, or make shape in preparation to attack

at b at the price of strengthening

were both part of strong formations then we would call white heavy and not strong-- this has happened in pro games:

both have nearby supporting stones! As in the san-ren-sei example above,

is preventing white from making a base in that direction. 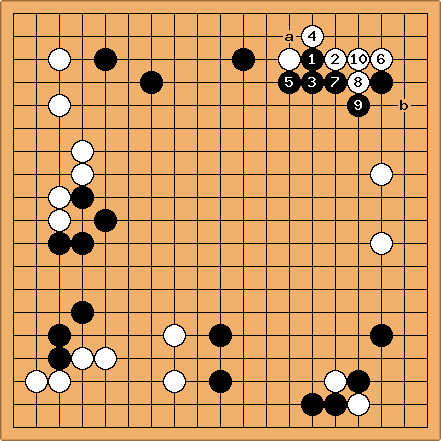 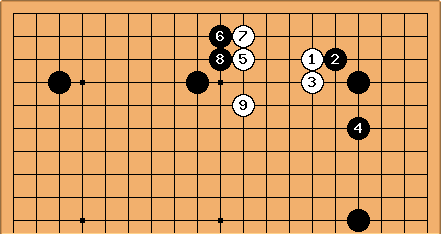 This full-board joseki is a case where the attack is good, even though white can make a nice extension. The reason is that, although white is able to make a living group easily, black gains a lot at the top left.