Flexibility is important for Go players. They must be adaptable to their opponent's play. 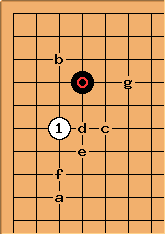 is a flexible move. There are good continuations for White at a, b, and c. If Black plays d, White can respond at e. If Black pincers at f, White has at least two responses at b or c.

In the example given, Black's initial play

at 4-4 is in sense more flexible than

. Since Black has the choice of playing a pincer or simply extending, Black can always take up position on the preferred side (left or top), whichever side White approaches. The 4-4 is also primarily an influence play, but Black can make a satisfactory fourth line territory from it too. 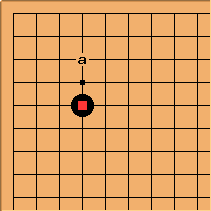 In contrast, the 4-5 point play

, that was more popular than the 4-4 point in even games up to about 1930, has a bias towards one side (the left side in this case). These days it is used much less. White at a next means Black takes influence or position on the left side; and that's a fixed strategy.[1]

The most convincing thing to say about flexibility is that most (not all) strong players favour it. But there is always the idea that rigidity might work if you were good enough at it. Is the kami no itte unique? Surely not, but not worth discussing with anyone who can't see that.

Bill: Flexibility is a key part of lightness. It is also essential to miai strategy. OTOH, when you have the advantage, you may want to reduce the possibilities available to your opponent. In addition, flexibility is an aspect of style. Most amateurs are insufficiently flexible. Their play is heavy. (Me too, I'm afraid.)

The point of the 4-5 point pincers page is that there aren't any. Of course this might be debated. But another aspect of flexibility that might be called typically Eastern is this: if you're relying on odd-looking plays to stay on course with some plan that is becoming an idee fixe, who is winning? So a sort of converse: try to be the one who knocks the opponent off course, away from normal, orthodox plays.

The principle of flexibility

Go is a game of complete information, but it is far from being solved. Some board positions, however, are already solvable by the mind (killing large groups, alive stones, endgame). In these situations, the player who sees a sequence giving him undisputed victory, will play out this sequence. This can be called "settling the shape". If settling the shape does NOT give a definite advantage, then it gives more information to both players. In particular, when the shape is settled with one move, the opponent is the first to adopt a way of playing that takes the settled shape into account.

Therefore, as long as it is unclear who is favoured by the board position, both players will keep their options open as much as possible. This applies also to part of the board.

The principle of flexibility comes from general principles of gamesmanship and the rule of alternating play.