Tapir: Hello, I quite often see a double approach, distant and near low approach and don't feel comfortable then... (because I can't read anything about it at Senseis :)) 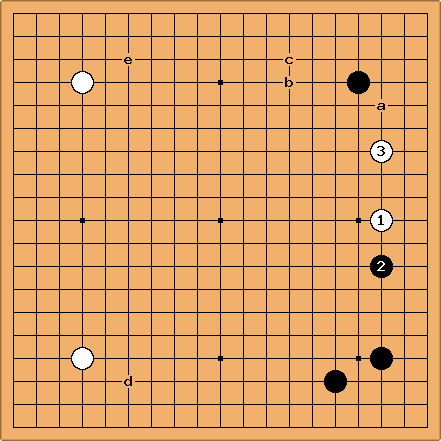 SL advises a play at a; b or c. However this didn't occur to me. I like d or e more. Because of this I suffered a double approach in the upper right corner later... 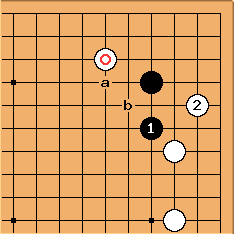 I tried a and b but didn't like the result so much. I found some pro games where the players exchanged

with Black later pushing once on the right or playing a shoulder hit to the marked approach stone.

I have an idea about a and b not being good. But I'm short of a convincing explanation. So... your turn.

b gives white a result similar to a double low approach with both stones near, but without the weakness of a 3-space extension on the right, so maybe called submissive.

Bob McGuigan: In the Example diagram: 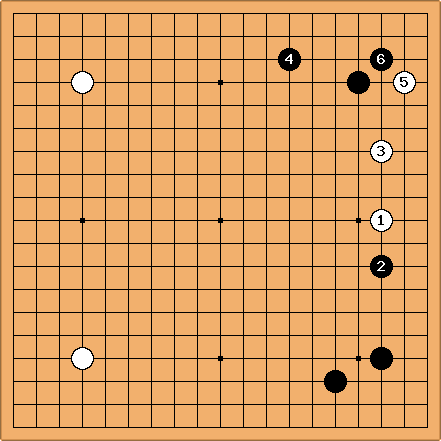 If White slides in with

gives Black a bigger corner territory than if Black had played a simple knight's move. This usually doesn't appeal to White. If White invades at the 3-3 point after

, Black ends up with powerful thickness which does not bode well for the white stones on the right side. I don't know about a Black move at b in the example diagram, a two-space jump from the corner starpoint stone. That two-space jump is rather thin and is usually played to work with a Black moyo which doesn't exist in this position, so it doesn't appeal to me. As for approaching the upper left or lower left white starpoint stones, I suppose those moves are playable, but they seem to invite a more complicated game than the moves in the upper right. 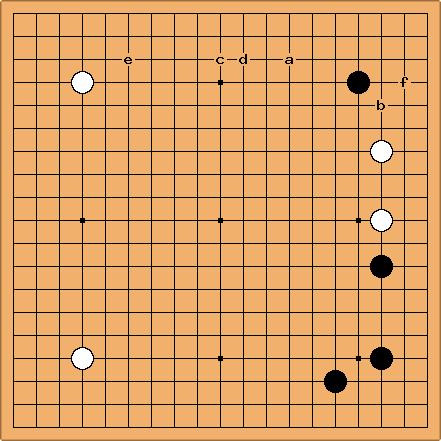 A search on gobase gives 32 results for this position. Next,

The database search supports the idea that the white stones and the black stone at the top right are engaged in a challenge for mutual stability and ensuring and/or preventing this stability is common sense. Dieter

Tapir: I have to admit that I'm absolutely clueless how to continue after the exchange of b for a. Another kosumi [1] looks bad to me, a pincer makes the first kosumi look bad... 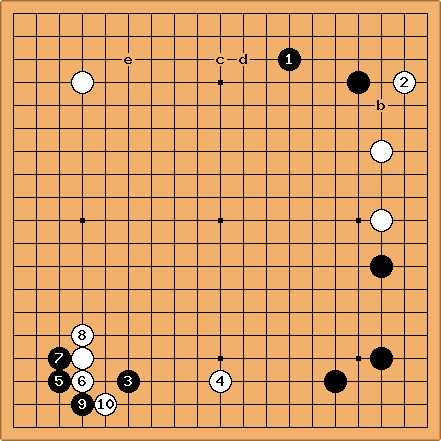 takes the corner and White gains influence at the bottom, which remains hot for another ten moves. 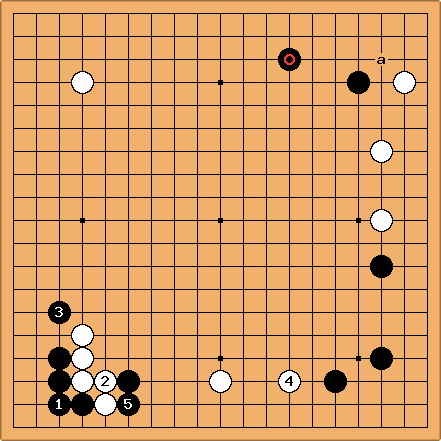 , Black immediately challenges White's influence here and a battle starts. The game is James Kerwin against He Xiaoren, from 1995.

Incidentally, I fully agree with the comment by Bob that the added value of Black's large knight's move (marked) lies in the better balance of a later. 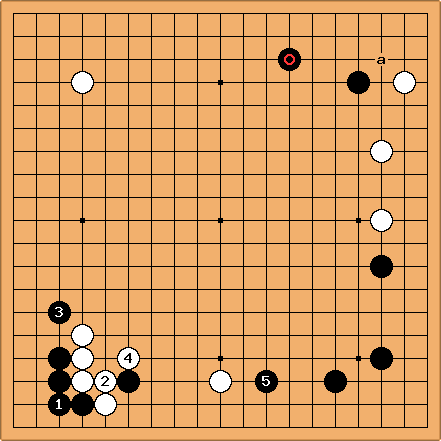 If White perfects her position into a thick one with

takes an ideal point, making a small double wing formation. The bottom is so hot because

make any extension or approach of the top left corner equally (and not so) valuable. I believe this would be too easy for Black, which is why White chose a more aggressive fashion with 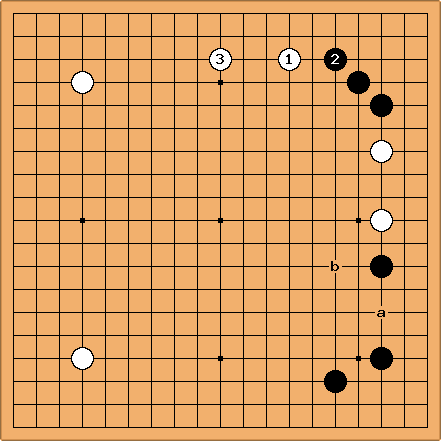 Dieter: Yet Black usually defends with another diagonal. White makes another two space extension yielding the initiative back to Black, who moves to another part of the board. Me too I esthaetically dislike the double kosumi, but you can't deny it accomplishes stability in the corner.

Tapir: No, I can't deny it. I may overestimate the 2 space extension on the right side. In size of actual territory as well as in stability. And thus underestimate the black corner.

BobWhoosta: Perhaps the value in the second kosumi lies not in territorial balance, but in the difficulty white currently has to invade at a. In other words, it's a power move. Because of his weak two space extension, he must view that area as strong because he is weak, leaving black a clear path to expand on the bottom without fear that he will be cut into from the right side. Also, sente is obviously nice. White is clearly getting a little better result in the top right, so to me these two factors represent the compensation that black receives.

Tapir (now KGS 2dan): Welcome on board! I am now easily five stones stronger than when I asked this question some years ago :) And I really learned to appreciate stable positions in the meantime. Leaving groups standing half-dead around worked earlier, now the opponents push harder, and I push harder and left behind weaknesses became more and more costly to both sides. So, while I think your comment is in the right direction, I believe White has no time to think about attack (even, if it is "I can't invade right now") but has to think hardly about defending this group. Or put otherwise, even a calm move like b is now a double purpose move, making territory while attacking White. Ah, I have another idea... but I like to put this in a new BQM. 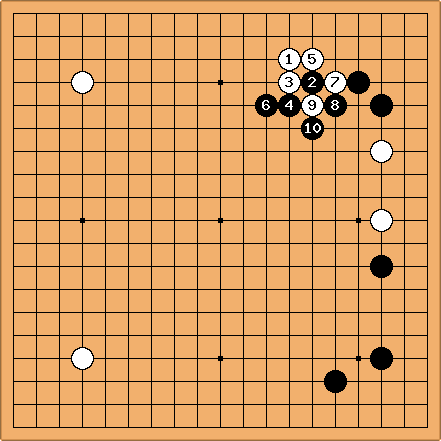 AN alternative in the games is this leaning maneuvre. Black goes for central influence here. If you do not like all these variations, there is the simple and common large knight's move, discussed earlier. I would choose it in my games. --Dieter

Tapir: Thank you all, I appreciate the comments (and play the large knight's move next time)... I would be glad however if someone could comment on my question on the double approach and my kyu-scholarship to guess the best next move.

xela: I see you've added some text near the top of this page ("Why is a bad?"...) What you're written there makes good sense to me--it looks like you've answered your own question!