jms: My opponent in DGS games used this twice against me in my double game. Is there some better way I could handle the sequence I'm showing here? It appears to be out of joseki, so there should be some way to punish my opponent. 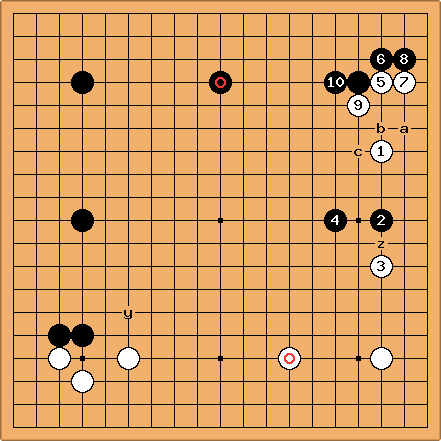 LukeNine45: My lowly AGA 6kyu opinion is that you don't need to "punish" this, as you have a beautiful corner already, and white is cramped. White punished herself. I would question

though, because it gives you a weak group. Someone stronger than me might be able to say if it's bad or not. Oh, and a black play at a looks good... So good that maybe white needs another play here to defend.

, then black b, white a, black c. This thickness works well with black's marked stone.

LukeNine45: Yeah... that looks good too. I'm thinking now that if white wants to play this way, she needs to either cross-cut or double hane with

-- as played I think black gets a good result too easily.

looks misplaced which reduces the urgency of a black response, but I don't like

is too good. If you're going to pincer/wedge on the right, I'd try z instead. That being said however, since this is a moyo vs moyo game, I think I'd tenuki

at y. If white gets a stone there, it starts to look pretty scary. Any double kakari white makes against the upper right hoshi stone is going to lack punch due to the lack of severity of

is also on an awkward point, you have options later on the lower side and I'd say black has the upper hand here. 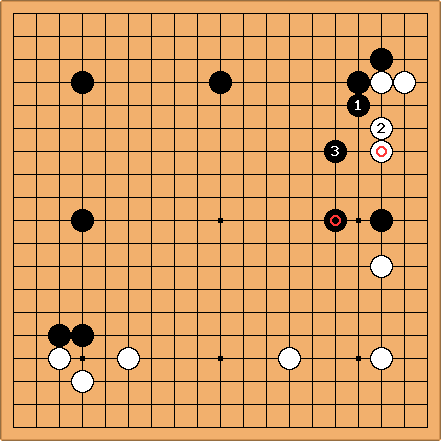 in the original diagram (

here). Black started out attacking with a pincer, but then makes a defensive move. How about

in this diagram instead, continuing the attack on

and starting to make a framework?