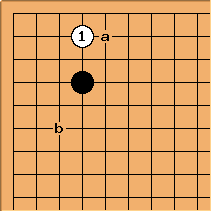 fernobob: a couple of times in recent games I have been faced with this invasion. It doesn't seem to appear on the joskei pages and I believe it is almost certainly trick play, especially as every time I've had it, my opponent has got a far better result than I'd have liked. What is the proper response to it?

Tapir: It is somewhat similar to a (the 44PointVeryLowApproach), looking forward to take either inside or outside. If Black has a stone at b

Velobici: See Submarine and note that Black is one move behind as compared to the sequences in 4463 enclosure 2-4 approach. As a result, Black is much weaker than if he had the 4463 enclosure. 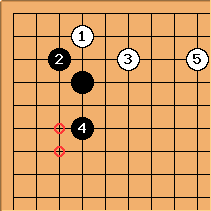 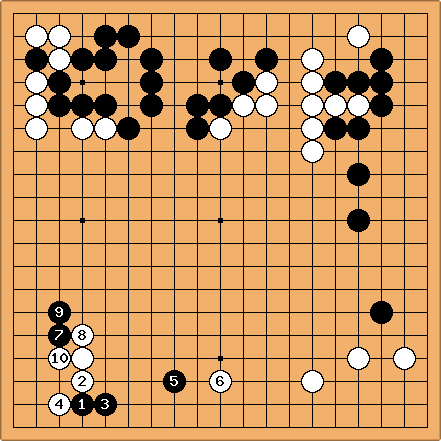 Dave: This does not seem to be that unusual in pro play. Here is one recent example. Normal use seems to be when the player invading wants to force play toward a specific side. The normal 3-3 invasion allows the opponent to choose which side to answer on.

Karl Knechtel: But can't you also force the direction with a 3-4 attachment? And what about the 2-5 play? In general, how can we choose between these moves?

AWA 6k: All I know is that a goproblems fuseki problem has this as an answer, and I've been wondering how to actually use it in a real game. EDIT: Here it is: