This page offers a guided study course for beginners who are trying to teach themselves how to play Go. Do not take it as authoritative.

If you already know what Go is, skip to the next section. Otherwise, you may want to read an introduction to the game.

If you are starting to play with no experience at all, take fifteen minutes to read and understand the basic rules of go, as explained at rules of go - introductory. These rules will teach you which moves are legal, and how to make captures.

The rules of Go are inherently very simple. However, writing these rules to be perfectly consistent and unambiguous (that is, writing them to to cover all possible board situations, including very rare or unlikely situations) takes a bit of effort. You don't need to worry about the finer details of the different rule sets until later in your career as a go-player.

The advantages in practical play from knowing the rules very well are negligible or very rare. Reserve study of the nuances until there's nothing more interesting left to study.

2. The concept of territory

After the rules have become clear, some beginners are still confused about the end of the game. That is, when does the game finish (when is the right time to pass)? And how does one pursue the goal of making territory?

There are two approaches one could take.

By now you've figured out that the easiest way to win is by capturing stones. If you capture a group of stones you get territory on the spot where they were, and your opponent loses a point for each stone you take off the board. But even if you peacefully surround a secure territory, you know that the only way you can get points for that territory is by proving that you can capture any stones that invade the territory.

Since stones are captured when they have no liberties, you know that it's easier to capture stones when you have more liberties than your opponent. In particular, you want to spot any situation where your group only has one liberty left.

Eventually you'll also spot slightly more complex patterns like double atari, ladders, and nets. When two groups are both in danger and trying to capture each other, you will want to learn techniques for winning capturing races.

As you become a stronger player, you may want to pick up the etiquette of go. Learn how to hold and play a go stone and why we play the first stone in the upper right corner. Or maybe you'll start trying to steer between the good habits and the bad habits that tie together Go players as a community.

4. Introduction to Life and Death

After a few games you will understand that keeping control over some territory on the go board depends on your ability to kill invading stones and groups of stones. What makes the difference between life and death of a group? As you know by now, when two groups are at risk of being captured, the one with more liberties will usually live. However, a group that has completely surrounded one or more liberties (an eye) is much harder to capture, and a group that has two eyes is alive.

Go players have systematically studied and analyzed the status of various unsettled groups - that is, groups that hover between life and death. You can start by looking through the basic live shapes. Once you recognize these, you'll notice that they appear again and again in your own games. When you know how to find their vital points, you can confidently kill dead groups and save living ones.

Now that you understand the difference between a live group and a dead one, it may be tempting to obsessively make sure your groups have two eyes, and your opponents' groups don't. But this is one-sided. Wasting a valuable move because you aren't sure whether a group is alive or dead is a sure way to lose.

By studying life and death, you will learn not just to identify whether groups are alive or dead at the end of the game, but to predict the outcome of the best possible attack on or defense of a group that does not yet have two obvious eyes. 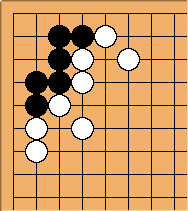 Certain stone patterns on the board, like the black one in this diagram, deserve your close attention because they share two characteristics: they hover close to the border between life and death, and they appear frequently in real-life games. The idea is to get so familiar with these shapes that you know how to handle them correctly in a game without the need to spend a lot of time reading them out (or play them incorrectly). Invest time now, reap victories later!

The opening, or fuseki, is not the easiest part of the game to learn. Typically stones are played far apart and because of this lack of contact, the rationale behind the moves can appear rather vague. Nevertheless, knowledge of a few basic principles allows you to lay a good foundation for the fighting typical of the middle game.

7. The balance of power; strength, thickness and influence

Now that you have learned about the technique of fighting, it is a good idea to start thinking about the purpose of that fighting. In a well-played game of go, you don't fight just for the heck of it, but you fight to gain an advantage in one of the two balances. 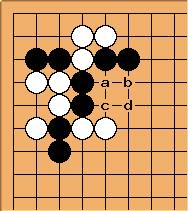 In the context of go, 'efficiency' stands for how well a stone is doing its primary job on the board, as well as how well it is doing secondary jobs. The difficulty is, of course, that you don't know what those future secondary jobs will be when you play the stone. Consider this diagram, and assume you're looking for a move to solve the problem "protect against a white cut at 'a'". The first candidate is a itself. But b, c and d also protect against the cut. (Look at how the cut is protected if you don't see how.) Secondary objectives in this case could be "protect another cut" (not relevant here), "make territory" (not really), or "prepare an eye for this group" (aha!). It's because of this last one that d is the move that makes 'good shape' in this context. The alternative moves at 'a', 'b', 'c' therefore are considered zokusuji (aka bad moves, crude line of play or anti-tesuji).

By now you have touched on a wide variety of go topics. If you got the

80 for 20 out of all of these, you made big leaps in your go strength. This is also the fastest phase of improvement of your skills (but don't take our word for it - the world is always ready for another go prodigy!). It is natural to expect your subsequent progress to occur in the same fashion. However at this point the biggest return on your investment will probably come from studying go deeper instead of wider. It is time to thoroughly understand the fundamentals.

Take your time for them, and start to appreciate the satisfaction derived from playing a sequence 100% correctly. It is a less spectacular or visible thrill than killing a 40-point group, but it is important you start to think of a 90% correct solution as a failure. Learn to read out a life and death problem until you are certain you have the right solution, not just very confident. Learn to only play atari when it serves a clear purpose, and not automatically or because you'll benefit from it if your opponent doesn't answer!

You deserve a break from serious study again. Why not take a look at some go humour? Or do you feel more like doing something half useful? In that case, learn some of the (mostly Japanese) technical terms, slang or jargon in "go terms". Or even be trilingual and learn the go terms in Chinese, Japanese and Korean.

10. The concept of positional judgment

Why is this important? If you are ahead on the board, you maximize your chances if you simplify the game and avoid dangerous fights. If you are behind, chances are you will lose if you just cruise along to the end: you need to complicate matters to create opportunities to overcome your disadvantage.

So far you have improved your go strength by developing your technique. For most amateurs, increasing their tactical level is a source of improvement for a very long time. But due to the law of diminishing returns, the rate of progress inevitably slows down.

Stronger players not only work on superior technique, they are also working on the way they look at the game. This is why looking at a club game between players 4 or 5 stones stronger can be such a bewildering experience. You see what they're doing, but why are they doing it?

To get to where they are, you will need to develop a strategic toolbox. Consider the eight concepts below, and other concepts described elsewhere, the basic tools. Expect to study them for a long time, because they are profound and subtle. Well, by now you probably realised that most of us are lifelong students of *all* the sections on this page.

An ever evolving go player is on a daily diet of tesuji and tsumego like a long distance runner on carbohydrates. Exercising like this keeps your working knowledge of life and death shapes up to date and sharpens the intuiton to find vital points and moves that work in a large variety of tactical combats. Some of these get progressively more difficult and involve or develop reading at the dan-level.

The endgame or yose starts when both players' groups are stable and they start to solidify the boundaries. How many points do you reckon a strong player can catch up at this stage? The answer is: a surprisingly large number!

Expertise in the endgame is comprised of two parts. The first is calculating the value of individual plays, which is to a large extent static. The second is understanding the relative importance of sente and gote, which is about the dynamic sequencing of moves.

Professional go games are an endless source for the study of good play in all aspects of the game. Don't expect to understand everything in a game, but use them to learn tactical sequences that work and to get ideas for your whole board game plans.

What to do if you're tired of cycling through the above 14 sections again and again?

You could move on to the Advanced Study Section or take a look at Pages for Beginners, if there is still something you haven't seen there.