How to Read Diagrams

This page aims to introduce to people the notation used in Go diagrams. The reader is assumed to have read and understood the introductory rules of Go.

This section describes everything necessary to understand diagrams at the introductory level.

Here, we shall use an example game to show how to read a diagram.

We shall begin with a 5x5 empty board. Recall that we start a game with an empty board, unless there are handicaps.

Black plays the first move at

After the first move, this is the situation on the board now.

Then White makes the second move at

After the second move, this is the situation on the board now.

Black decides to make the third move at

White decides to make the fourth move at

And the game continues...

Summarizing the moves in a single diagram

However, showing one move per diagram is very cumbersome. So, we summarize the process by indicating multiple moves in a single diagram.

This diagram summarizes the sequence of moves shown earlier. The way we read this diagram is to start with an empty board, then Black plays at

, then White plays at

, then Black plays at

, and then White Plays at

Showing a sequence of moves from a given position

It is often convenient to show a series of moves from a given position, where some moves have already been played.

Suppose we have a position as shown here.

From the given position, Black makes a move at

, and White makes a move at

Note that to save space, often only this diagram is shown, but not the previous diagram. But it should be easy to infer the starting position from this diagram: simply remove all the numbered moves.

Showing only a portion of the board 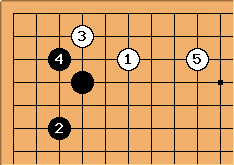 It is also common to show only a portion of the board to save space, as illustrated in this example.

However, from the diagram alone, we do not know what the remainder of the board looks like. 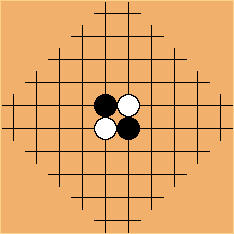 Sometimes, an author wants to indicate that only a non-rectangular portion of the board is of concern. In this case, the lines are left out in the unknown area as shown in this diagram. 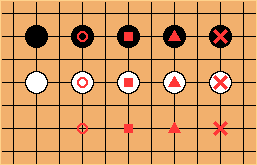 It is also common to mark stones or empty spaces with a square, X, circle or triangle, to facilitate discussions.

It is common to have circles mark the most recent move or possible next moves, X's to mark dead stones, Squares to mark Ko spaces, and triangles to mark a group which are alive. This is not a fixed rule in teaching, and the symbols can be used in other ways.

However, the marks are purely for descriptive purposes, and do not actually change the state of the piece or board.

Other kinds of annotations, such as letters, can also be found in the Go literature. They can be used to reference both empty points as well as stones. See symbols for more.

This section describes situations that occur in special cases and advice on creating diagrams.

Playing on the same point as a captured stone

Say in the game, White played at

We can summarize the three moves in one diagram by putting "

" as shown here. An alternative notation to indicate this is " 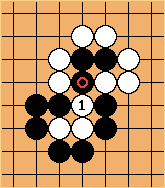 Marked stones come in very handy when we want to play a move at a point that was occupied by an unnumbered stone, like in this diagram.

In some texts, the "

" indication may not be located in the diagram caption, but rather in the accompanying commentary instead. Also, for this particular situation, some literature will say "

" rather than marking the stone.

As a principle, removing all numbered stones should give the initial position! Labelling a ko as follows is therefore wrong:

There was a stone at

from the start (otherwise White wouldn't need the ko threat

The right way to present this situation is:

An alternative is to say "

takes ko" rather than marking the stone. This can be extended - "

takes ko". However, if there are multiple kos on the board this can get confusing if it is not made clear which ko is being taken.

To save typing and/or the number of diagrams needed, Go players often employ a shorthand in the text accompanying the diagrams. Consider the following diagram and its commentary:

is played as shown in this diagram, then

Another example of a shorthand description, using letter annotations, is as follows. 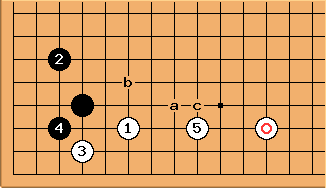 here is a mistake as it makes the overall position of

should be played at a, to maintain a balance between high and low stones. On the other hand, if

is played at b, then White's position is too open, inviting an invasion at or around c.

For how to create and edit diagrams on Senseis' Library, see how diagrams work.