In general there are five different four-point eye-shapes. Three of them, the straight four, the bent four and the twisted four are living shapes (no further play necessary). The status of the pyramid four depends on sente and the squared four (tombstone) is dead as it stands. (See also bent four in the corner.) 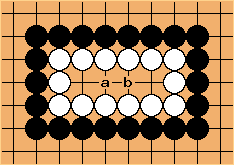 In the straight four, a and b in the diagram are miai.

All five-point eye shapes are alive except the crossed five and the bulky five. Some examples: 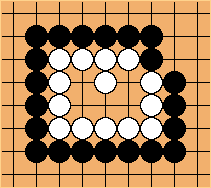 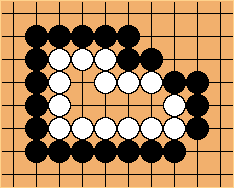 All six-point eye shapes are unconditionally alive except for the rabbitty six and rectangular six in the corner.

All eye shapes of seven points are alive. 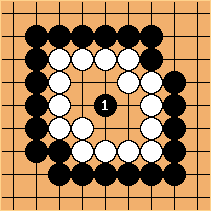 This shape (butterfly seven) is one that seems most likely to be killed, but after

the position is seki.