The state of a stone or group of stones that has only one liberty.

The process of doing so, ie placing a stone that causes stones to be in Atari, is called Ate. (So in the strict sense, a player plays Ate, but makes Atari afterwards.) 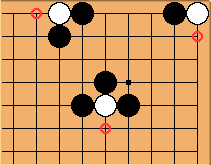 The white stones are all in atari. Each white stone has one liberty. White's liberties are the marked intersections (or points).

A stone in atari is in danger of capture by the opponent. 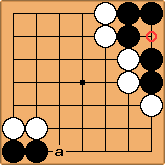 The five black stones on the top right are in atari. The only liberty they have is the circled intersection.

The group of two black stones on the lower left is also in atari. It may be captured by white (when white plays at a).

Unable to see which stones are under atari? Some exercises can be found at Spot the Atari.