Go is a game of tactics and strategy. There are, however some basic techniques that in itself require no reading or positional judgment, but which make a fundamental part of good play.

We will list these techniques here, and call them basic instincts. Below, we will elaborate them further or refer to other pages where they are elaborated.

Many basic instincts have been immortalized as proverbs.

How to use your Basic Instinct

In all cases, the suggested move is the first move one should think of. They are natural moves. If this move seems to bring no bad result, then it is highly probable that this is the best move. Of course, there are always exceptions, but investigating other options first is likely to be inefficient usage of the brain. See Basic Instinct Counterexample or Basic Instinct Counterexample2.

The advantage of knowing the Basic Instinct is twofold:

The following diagram shows all the situations explained in more detail in subsequent sections.
In the diagram and in the index, the labels a,b on individual positions are linked to the sections discussing them (these links need updating whenever their section numbers are changed by adding or removing other sections). 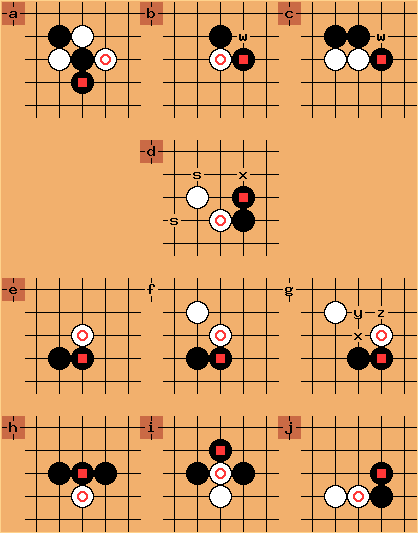 From an atari, extend 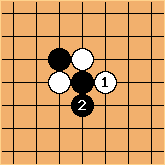 A stone in atari can usually increase its liberties by extending. This is basic instinct.

Answer the tsuke with a hane

Tsuke means stone played next to an opponent stone, while disconnected from any friendly stone. The hane blocks it, bending around it.

If one considers the hane and stretch below the two stones as well, there are generally 4 reasonable responses to an unsupported contact play.

See Respond To Attachment With Hane, How to attack

Hane at the head of two stones

See Hane at the Head of Two Stones. See also how to attack, and the related 'Diagonal attachment - as inferior shape.'

strengthens White's stone and weakens Black's. It also blocks Black's approach to the area below. The next diagrams show related positions. 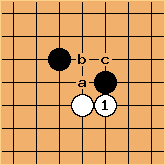 Sometimes it is better to push and cut (White a - Black b, White c).

Connect against a peep

See also Even A Moron Connects Against A Peep. 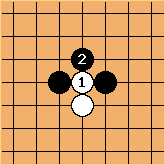 More at Block the thrust

Stretch from a bump

Please write your comments in the /discussion page.