The opening phase (joban) in a game of Go is where both players make their initial claims to the territory on the board (fuseki). Typically, an opening can last 30-60 moves, after which the board has been divided into several zones where each player hopes to make territory.

A player who has played a better opening (i.e. has outlined more influence or territory) than the opponent can be comfortable in the knowledge that the opponent must take risks, through attacking, invading and reducing, in order to catch up and win the game.

Conversely, if you find yourself behind after the opening, you must play more aggressively to have a chance to still win.

As a result of the opening, the aim is not to find yourself with a large territory, but rather with a good basis (influence) from which you can develop your territory.

This is directly linked to how you should avoid only concerning yourself with a local area, and pay more attention to whether your moves affect the entire board well firstly.

One of the main objectives of the opening is to make use of your stones effectively and efficiently. (See also Shape) 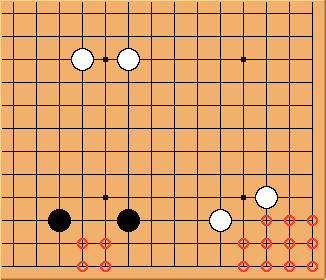 Therefore, plays during the opening are normally played in this order:

With the spirit of the black and white stones at hand, in theory, while holding black stones as a player you should retain "sente", the initiative, or first-move advantage all the way through to the end in order to take be able to exchange big territorial points evenly with white and also seizing the last big point on the board while playing a territorial game, in which case you can balance out the komi or compensation points that white receives. While playing as white if black plays overly aggressive then he can merely play for territory and use komi to his advantage (letting black lose momentum). However, black can use his first move to his advantage by forming a "moyo", or framework as found in common openings. This combines high density territory (much more so than regular territory) and also attacking power in general if white chooses to invade or reduce his area too early before settling the rest of the board as an example. Therefore in accordance with the spirit of white stones, white should find alternate ways around this and counter accordingly. Eventually, however, as you get better you may notice a different trend, or even that the imbalance has disappeared. Also, keep in mind that as black, one probably has the initiative in choosing how one wants to open the game. Whether a simplistic game follows resulting in a lot of endgame, or otherwise, is probably due to this in part as well.

The ideas presented here are not complete, nor are they advanced. However, we hope that they will be able to guide you. There is no doubt that the opening in Go is the most difficult part of the game, so if all things are not clear to you, do not despair.

Another good way to learn about the opening is to watch professionals play - although the joseki they use can be very complex, the underlying principles are the same. For further study there are numerous books out there: check out