This article is about the strategic concept. For the software by the same name, see Sabaki software.

Sabaki is a Japanese go term and English loanword that is most commonly understood as the process of establishing potential inside an opponent's area by creation of a non-heavy stone(s) or group(s). While the purpose of sabaki is varied, it is most often used to either directly reduce the opponent's area wherein sabaki is taking place, or to create forcing moves that can gain indirect benefit elsewhere. Since the process may employ a wide range of techniques and concepts--including lightness, flexibility, sacrifice, shinogi, shape, and more--the term has often been defined in a broader context. 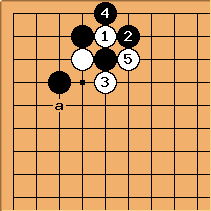 This sequence by White started with the sacrifice cut at

is an example of sabaki play. White may then continue at a, treating the other stones lightly. Threatening ko with

is also notable as White can afford to lose a ko here, but Black can not. Ko techniques are one of many techniques that can be used for creating sabaki.

For another way for White to play here, see light play example 4. 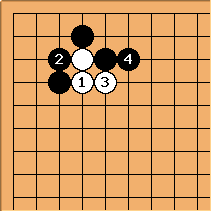 If White just plays ordinary moves such as

here, the feeling is clumsy and the result a heavy group.

It helps that in the Example 2 Black stretched with

, but in Example 1 Black captured instead (to where White would play

Enclosure Josekis: Making a light, flexible shape which makes it difficult for the opponent to launch a severe attack.[2]

Opening Theory Made Easy: Making light flexible shape in order to save a group.[3]

Strategic Concepts of Go: [...] the development of stones in a dangerous situation in a kind of quick, light and flexible way, either to escape or to make eyes if necessary.[4]

The Chinese Opening: Settling a group by making a flexible and resilient shape.[5]

Vital Points and Skillful Finesse for Sabaki: [...] the art of handling stones that are in dangerous situations.

用語小事典 (Term Encyclopedia, Nihon Kiin): サバキ: サバキ石の働きがとどこおらないよう、うまく処理すること。 (Sabaki: To handle the situation well so that the potential of the sabaki stones is not wasted. --CDavis7m)

Broader Renderings of the Concept

While sabaki involves making light shapes and occasionally settling groups through shinogi, it doesn't exactly equate to either of these. For example, the process of sabaki could involve other aims, such as reducing in sente by means of sacrifice(s) or tempting the opponent into a disadvantageous large-scale fight. The local objective may only be a means to a global (larger) strategic objective. As such, the exact rendering of sabaki can vary depending on the context and, as a result, has seen broader attempts at defining.

Broad definitions of sabaki are more like the following:

Though sabaki does not refer to shape; rather, it is a way of playing, it is often used to avoid heavy shape.[6] A group that ends up as heavy has failed to make sabaki. To avoid a heavy group, one can kind of reposition [7], step aside, with a light move that aims to utilize a coming attack for the (quick) development of stones, i.e. use forcing moves[8] before playing a vital point. This often involves a sacrifice which serves to force the opponent to go around capturing before he can resume to attack. Meanwhile, one makes sabaki by building outside thickness or a formation where eyes can be attained. The opponent may not like the result and play different, in which case one can then be satisfied with the indirect defense of a weakness and better follow up moves for making good shape.

The term is used in Kendo (the art of swordplay), where it means fancy footwork. In Judo and Jujutsu, tai sabaki (usually translated as body movement) is used to describe the various pivots and movements of the body to defend against an attack or to off-balance your opponent. In other words, those body movements that put you in a good position (or your opponent in a bad one). Lightness is implied in the Judo context.

Most of the special go terms including sabaki are written with katakana and not with hiragana or kanji. They are special terms and get special treatment.

Charles Matthews: If you fall too much in love with sabaki you find that the techniques when over-used tend to make the opponent too solid, even thick.

Andy: Sabaki is delicate to apply. You don't want the opponent to get solid or thick, but having them get overconcentrated instead would be just fine.

[6] Strategic Concepts of Go, fifth printing, p. 40: Please note that sabaki does not refer to shape; rather, it is a way of playing. However, the idea of shape is often related to the method of sabaki. Sabaki is often used to avoid omoi katachi (heavy shape).

[7] Repositioning is an important aspect of sabaki. In go this is not different. Instead of moving against the attack with something like solid defense, one moves out of the line of attack, welcoming the attack, for the direction in which the attack is geared, can now be absorbed into our own movement, will give it momentum, so that it not only makes the attack ineffective, it is also used to our own advantage.

[8] Strategic Concepts of Go, fifth printing, p. 45: [...] sabaki consists of two steps: first, kikashi moves and then the moves which occupy vital points. The kikashi moves usually turn out to be blocking moves in that the opponent must, in a sense, go around them in order to attack the main body of stones. Sabaki, How to Manage Weak Stones, p. 20: Don't take a gote move unless you see a nice picture. Use forcing moves to make sabaki. If necessary, play to generate forcing moves.

Dieter: a L19 discussion in dec 2021 with John Fairbairn questions

this (v137) definition. According to John, lightness and flexibility can be added to the notion of sabaki but are not inherent. This definition is probably closer to shinogi, while sabaki is more about "handling" a situation more generally - I admit I can't positively derive from the discussion what sabaki is