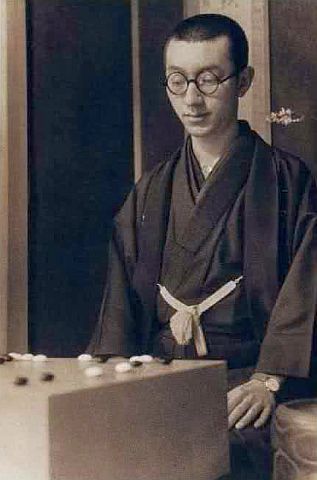 Go Seigen (吳清源, Wú Qīng yuán, Wu Quan(吳泉), naturalized Japanese name Kure Izumi, 12 June 1914 - 30 November 2014), was a professional 9-dan. He is considered one of the strongest players of the 20th Century and, by many, one of the strongest players of all time. Along with Kitani Minoru he helped usher in the age of modern go with their Shin Fuseki movement. He moved to Japan in the 1920s, but remained mostly independent, occasionally acting as a guest member of both the Nihon Kiin and Kansai Kiin. He participated in a large number of sponsored challenge matches with other tops players of the day and dominated most of them. Upon retiring from competitive play, in 1983, he devoted himself to promoting "Go in the 21st Century" -- continuing to lead study groups for professionals and share his thoughts about the game, which remain highly regarded.

Go was born 12 June 1914 (= lunar 19th of fifth month, 1914) in Fuzhou, Fujian Prov., China, but was moved to Beijing a few months later to join his extended family.[1] Go Seigen started learning go at the age of nine. He excelled at the game, and by the time he was 12 years old, he was already of professional strength. Between the ages of 12 and 14, he played against a number of visiting Japanese professionals, such as Iwamoto Kaoru (6-dan), Inoue Kohei (5-dan) and Hashimoto Utaro (4-dan). He managed to win several games, causing his reputation to spread to Japan.

In 1928, Go moved to Japan to start a professional career with Segoe Kensaku as his teacher. His playing strength was judged sufficient to be given the rank of 3 dan immediately. His health was frail, and he did not play in the Oteai, instead playing a number of exhibition games.

In 1929, Go played against Kitani Minoru for the first time, a game which stirred some controversy because Go started on tengen and played mirror go for a long while. This upset Kitani but the two players were to become good friends and were at the forefront of a wave of changes about to sweep through Japanese go.

In the early years of the Nihon Ki-in, the uchikomi ten-game match (jubango) was a popular format, though by then it had become almost a Yomiuri Shinbun patent. As komi was not yet usual, playing multiple games was the usual way to compensate for the starting advantage. Such matches used the old handicapping system of the day, and the rule was that when one player went four games ahead, the handicapping was adjusted. Sometimes the matches were abandoned as soon as this happened.

Go Seigen was extremely successful in his ten-game matches, beating all of his top rivals except in one match where he gave a handicap throughout. There were also many parallel six-game, four-game, three-game matches against top players (usually the current Honinbo) where Go was, if anything, even more successful. Here is Go's record the ten-game matches:

After the Ten-Game Matches

The Game with Shusai

The game between Go Seigen and Honinbo Shusai to celebrate the 60th birthday of Shusai is mentioned in Magic of Go. However, the column fails to mention the controversy surrounding the match. Each player was allowed 24 hours of playing time. Over a period of 3 months, from 16 October 1933 to 29 January 1934, the game was adjourned 13 times always at Shusai's turn to play as it was Shusai's privilege to determine when adjournments would occur. As the players were allowed to go home during the adjournments, many suspect that Shusai adjourned the game at critical moments and studied the current game situation with his pupils. Though he was behind mostly during the game, Shusai made a myoshu at 160 and surged back to eventually win by two points. Later, Segoe Kensaku let it slip to a journalist, supposedly off the record, the widespread belief in top go circles that Maeda Nobuaki, one of Shusai's pupils, had discovered the move idea. It was certainly well known that Shusai did discuss the game with his pupils during the adjournments. The game was played without komi. Go Seigen played black. John Fairbairn presents a thorough analysis of this game and the surrounding situation in his book ''Old Fuseki vs New Fuseki: Honinbo Shusai plays Go Seigen'', published by Slate and Shell.

After an unfortunate collision with a motorcycle in 1961, Go Seigen gradually retired from the pro world, because when he had to play longer games he had problems with concentration. He continued to write books and holds a regular study group with today's top Japanese pros. For some of his later views on the game of Go, see Tengen fuseki. His one formal pupil was Rin Kaiho. An introduction to some of his theories about the go board can be found in instalment 12 of GoGoD's New In Go,

here and also in The Go Companion.

Go died of natural causes in Odawara, Kanagawa Prefecture on 30 November 2014 at the age of 100.

Go, like most players of his day, began as a devotee of the Shusaku opening. When he became a 5-dan his rank began requiring him to start taking White more often than not. Since this promotion occurred before the advent of komi go, then he consciously began changing his style to cope with White's inherent disadvantage. His change in style included several aspects...

First, he began developing a fast-paced style. From late 1933-35 he experimented with 3-3 and 4-4 openings exclusively, then from 1936-1953 he opened exclusively on the 4-4 point when playing as Black. These were all with the aim of settling the corner more quickly. Next, he began paying closer attention to who ended up with sente at the end of sequences. Finally, he began incorporating his famous predilection for contact plays with the aim of keeping the initiative. All combined, these helped him get around the board more quickly so that he could reach the big points first.

Second, was the development of an amorphous style that emerged from complex infighting, contact plays, and ko fights. The end result was frequent, large exchanges/trades. After his first loss in his 1953-4 jubango against Sakata Eio, he played his opening move as Black on the 3-4 point -- the first time in nearly seventeen years. After this, he slowly integrated a wider variety of corner openings into his aforementioned style.

In addition to these characteristics were: an exceptional ability at the conversion of thickness into profit; a keen positional judgement backed by accurate reading and a special intuition; and a penchant for rarely losing a ko fight that he initiated. He also regularly used much less time than his opponents.

This is a collection of various thematic, career statistics, such as against certain opponents, playing as a certain color, number of games where he opened with a 4-4 point, etc. Feel free to add your own theme.

Go Seigen has authored, co-authored, and contributed to a large number of books. However, most still remained untranslated for the Western audiences. See also: Go Seigen Books.

Numerous books have been written about Go Seigen. The most famous English ones include a series of commentaries covering a part of his famous, sponsored challenge matches by John Fairbairn.