Go Seigen group is a term coined by John Fairbairn for alive groups that are located at the side of the board between the centre-side and the corner. While they don't end up making much territory themselves, they effectively remove any potential for both sides in a whole sector of the center. 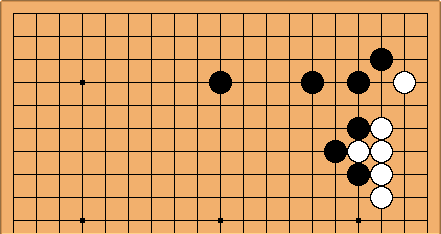 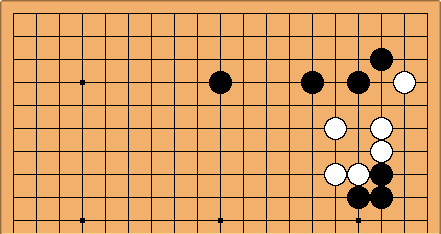 (referring to the original description, John has reacted as follows. The description has now been edited to remove the "hemming in" part.

John F. First, readers should note that the original text has been amended in line with some of my comments, so my comments are not as weird as they now appear. Second, I do not regard the top group as a GSG group. In the bottom true example, hemming in is irrelevant. The group is alive so the question of Black trying to hem it in does not arise. Of course, if Black starts a hemming in operation early enough, a GSG group does not result, but as it then doesn't exist it can't be described.

Note also that making this page risks turning a light-hearted piece of journalism into more than it can truly bear. It was meant to stimulate thought, not to be dogma.

tapir: Well, I was contemplating whether I want such an article for a while. Though I believe the concept of center potential and denying of this potential isn't very well established among say lowly dans (that is where I am now). People go with "there is no territory in the center" and single mindedly go for territory, this way they have to spend many moves in the endgame to make sure that there really is no center territory. Even if you succeed in this you spend much more moves in the center as opposed to accessing it early as with a GSG. Or to put it in yet another way center potential = many moves with a large follow up = good endgame (many sente moves). Denying such center potential in a natural way is then very good.

"Not hemmed in" is just my personal way to express "access to the center", I should have dropped the "easily" though, a "quadrant" is afaik just a sector with a 90 degree angle. I thought it would be better received that I don't copy+paste or just paraphrase your piece.

I remember the conversation on the giraffe's neck (coffee machine). While this isn't yet a Go Seigen group it easily becomes one when it is attacked or approached in preparation for an attack. For me it was an idea that helped me in appreciating some 4th line opening moves that looked rather odd at first sight.

Dieter: Lately there have been a few references to Go Seigen Groups by John Fairbairn himself, at L19. I think the light-heartedness has made room for a stabilizing concept, even with its creator. So I think the page has merit.

tapir: Imho, not only this page is messed up (I claim responsibility) but the original GoGoD post seems to be inaccessible as well. The GoGoD post included a part about Tchernobyl zones and an emphasis on center-side to corner, etc. while this page probably was more what I was reading into it with quite a different emphasis (how to deny territory in the center) and added linguistic quirks of foreigners English. It was then corrected to be more in line with the original, while saying less on the page, ... overall quite an embarassment.