The first game was played before the rules were properly codified. 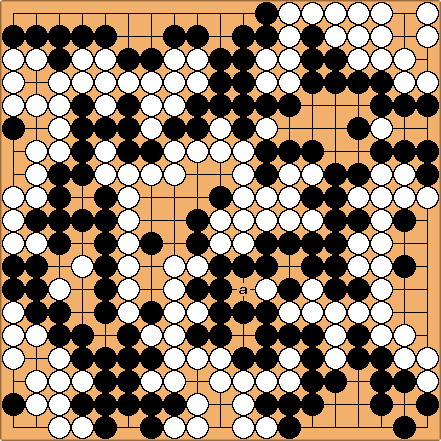 At the end of the game, Go reminded Iwamoto that Black should fill in at a. Iwamoto said that it was not necessary because Black has more ko-threats than White. Thus, the game was judged ambiguously as "White won by 1 or 2 points". Subsequently, a temporary rule[1] was passed, saying that the player with more ko-threats automatically wins the ko, without the need to resolve the ko. As a result, another judgement was passed with "White won by 1 point". 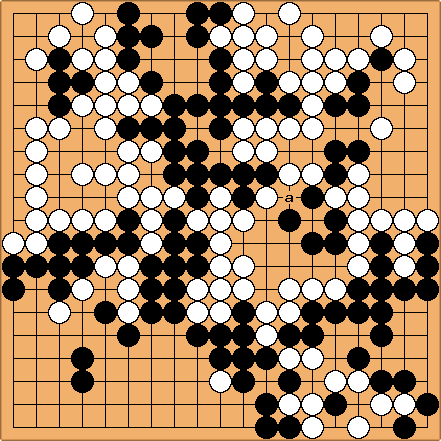 In 1949 the Nihon Ki-in issued their first codified rules; these rules said players had to eliminate possible kos at the end of the game.

In this game, Takagawa told Go that he should connect at a to avoid a ko (this is in compliance with the 1949 Niho Ki-in rules). However, had Go connected, he would lose by half a point. Go refused, using Iwamato's argument in the first game above: as White has more ko-threats than Black, the connection is not needed.

It is not clear that this game was played under the 1949 Niho Ki-in rules, as Go was not a member of the Nihon Ki-in at the time. The game went into dispute for several months. Eventually, Go agreed to connect on the condition that the Nihon Ki-In fix their rules.[2]

Bill: Modern Famous Games （現代 の 名局） vol. 6, p. 218 explains Go Seigen's position. If the game with Takagawa were played under the Nihon Kiin '49 rules, White would have to protect. However, Go Seigen did not belong to the Nihon Kiin, and there was no firm agreement to play under their rules, as Takagawa assumed that they were. Go Seigen agreed with Honinbo Shusai that whether to protect should depend on how the play should go as if played under real game conditions, and so ko threats matter. The book -- Go Seigen is listed as the author, but this page may have been written by the editor -- says that Go Seigen agreed with Iwamoto in the game above. 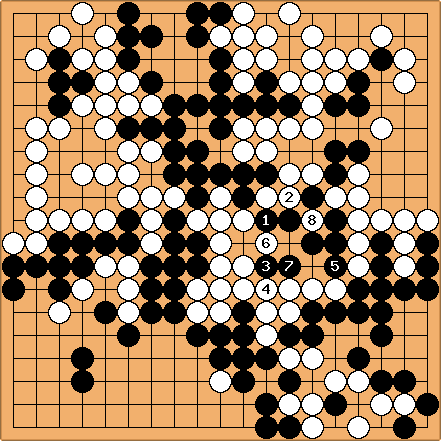 are the required moves, which results in either a seki or a ko.

is one possible defence, resulting in a ko.

Nick George: Sorry, I don't get it. Is the idea that if there were a ko, white would have to win it by playing an extra stone? That can't be right, because then white would just force the ko. Why should white have to fix a weakness if black can't exploit it?

Bill: The ko does not arise unless Black plays first. So White cannot just force the ko. White would come out better in a ko fight. (Modern Famous Games shows a fight where the ko gets shifted to the top left corner. White takes that ko on move 24, but Black has no ko threat.) However, if White makes the play to win this ko, that extra play amounts to making a protective play beforehand.

sig? I don't get why this is even a problem... if there's a move that "needs to be added" then shouldn't black then just keep playing and punish it? If black plays on and loses the ko, and score doesn't change, won't that very easily fix the result dispute?

kmr - Sig, as i understand , the core of problem is that 2 passes from both sides put game into stage where only dame filling and defensive move to prevent death (cuz filling dame take liberties) are possible. No moves like ko capture etc. So if late ko arise, then player who has less ko threats have no chance to win it since he will soon find himself without ko threats (while his opponent still has some). Then if there are no dame on board he is lost - he can either play move in his or enemy territory which lose point, ot he can pass. First option is bad since he lose 1 point so his enemy will just connect and win (this situation i equivalent of agreeing ko as lost). But in second, his opponent will pass too, and then he is no longer allowed to play ko. I may be wrong, but thats how i understand this rule dispute.

Bill: Temporary rule? What rule? By whom?

(A little later): I have found a

Chinese web site with pages from Go Seigen's autobiography. There it states:

With the help of Babelfish I get the impression that, at the time, without a codified set of rules, the "temporary" practice was that the player with more ko threats did not have to fill the ko when there were no more dame. (This accords with the known opinion of Shusai.) Accordingly the game was adjudged as a White win by one point.

John F. I share Bill's doubts about a temporary rule. My understanding is that Iwamoto maintained that he did not have to fill the final ko because he had more ko threats than White. Unaware of any official rules, the referee (Segoe) was unable to resolve the matter. As Go had won anyway, the result was published as "White won by 1 or 2". A few days later someone discovered that a committee set up in Shusai's time had drawn up a byelaw that agreed with Iwamoto's interpretation, so the official result became W+1. The first codified Nihon Ki-in rules issued in the following year said players had to eliminate possible kos at the end of the game.

Incidentally, the existence of such byelaws should give those writers who say the Nihon Ki-in had no rules before 1949 (as in the Chinese quote above) pause for thought.

Babelfish was of little help, talking about horsewhips. ;-) I get the impression that the Nihon Kiin agreed to study the question of filling such final kos, but reneged on that agreement.

f3et?: otoh, some years later, Deepl gives this impressive translation : This problem had to be solved by the reviewers of the Japanese Chess Academy. In accordance with the rules of the Japanese Chess Academy, they awarded the game to Takakawa, who was playing black, by half an eye. At the same time, they acknowledged the incompleteness of the rules and agreed to work out a solution to improve them as soon as possible. However, 25 years later, to this day, there is still no news about the revision of the rules.

pwaldron: My understanding (from the Go Player's Almanac, I believe) is that the Nihon Kiin did indeed study the question, but it got stuck in committee.

"After mediation by the Mainichi {newspaper}, Go accepted Takagawa's win and agreed to follow the Nihon Ki-in rules in future. In return, the Nihon Ki-in agreed to consider Go's proposal for revising the rules. (This promise was not kept for a long time, but not through bad faith. A number of attempts over the decades to make the Japanese rules more logical were thwarted by the traditionalists....)"

Harleqin: So, those "traditionalists" do not hold up ancient or at least old tradition, but a rather new interpretation.

Bill: I think it was all new. It seems like Shusai's opinion held sway while he was alive, but by the time the rules were codified, the opposite opinion won out. To talk of traditionalists in regard to these rules controversies does seem silly. However, the "make ... more logical" could refer to such things as the bent four rule, not counting territory in seki, no suicide, and so on. Those do seem to be traditional.

jfc: Obviously the problem is that Go Seigen is a westerner who demands precise definitions for everything. Perhaps if he were to take the time to study some eastern philosophy he would eventually come to appreciate the beauty of a rule set that allows a foreigner to, at different times, be on each side of the same argument and lose the argument both times! Ah, the delicious wabi sabi of pre-1949 rules!

Harleqin: While I understand your irony, I'd like to point out that Go Seigen is quite fluent in the chinese classics.

Pasky: So what do the 'current' Nihon Ki-in rules say? The 2003 rules appear quite complicated and I'm not quite able to tell whether they mandate you to fix any open ko or not. A similar position recently appeared in a

dan KGS game - black would lose a point if he fixed the ko, but white had no ko threats and had to actually spend several approach moves inside black territory to create the ko; I think even if such a rule would be in effect by current Nihon Ki-in ruleset, this hopefully wouldn't be covered (and not to say that KGS Japanese rules necessarily need to follow it either).

Bill: The current Nihon Kiin rules (1989) say that life and death are settled by hypothetical play (although they do allow for reopening play). During hypothetical play a ko may not be recaptured except after a pass for that particular ko. Effectively that means that ko fights should be settled before stopping play. See Japanese Rules /Life and Death Questions for how modern Japanese rules treat that game position.

oren: A similar problem came up in game 5 of this year's Kisei title between Cho Chikun and Yamashita Keigo. A referee had to be asked whether filling the ko was necessary, but the game was decided by enough to not make it matter.

TesujiHero: Moi Confuzzed. @.@ :P wouldn't some of the Ko stones be considered dead? I mean its different from White to black's perspectives.