Hashimoto Utaro (橋本宇太郎, Honinbo Shou, Hashimoto Utarō, February 27, 1907 - July 24, 1994) was a Japanese professional 9-dan. He was the founder and first director of the Kansai Ki-in, one of the strongest players in the early days of tournament go, the third player in modern go to reach 9-dan status, a player in the famous Atomic Bomb Game, and a prolific tsumego composer. His professional go career lasted 72-years.

Hashimoto's teacher was Kubomatsu Katsukiyo and followed by Segoe Kensaku.

Hashimoto was known for his longevity, with a professional career lasting 72-years. He played in the final of the 1st Kisei title in 1977 (at the age of 69); set a record by entering the 3rd Gosei league in 1978 (at the age of 71)[1]; won the 24th Kansai Ki-in First Place Championship in 1980 (at the age of 73); and played against Cho Chikun in the 7th Sanyo Exhibition Matches? in 1981. At the time of his death he set the record for the oldest active player at the age of 87 (previously held by Hayashi Yutaro).

One of Hashimoto's most famous matches was his come-from-behind victory over Sakata Eio in the 6th Honinbo title match in 1951. It was a clash between factions -- the newly formed Kansai Ki-in (with Hashimoto leading the charge) and the already established Nihon Kiin (with Sakata challenging to regain control of the title). By game five Sakata was leading 3-1. Hashimoto changed his style completely from his usual rapid development to a solid style and in games five and six he mounted his comeback. Staying composed Hashimoto refused to be drawn into the wild fights that Sakata tried to start. By game seven Sakata crumbled as Hashimoto triumphed, claiming the Honinbo title for the Kansai Ki-in. Had Hashimoto lost, it might have caused the Kansai Ki-in to fade away like so many splinter groups before it.

Biographies commonly refer to him as the most prolific tsumego composer ever. As quoted in Go World Iss. 71 p. 6:

It was his practice to compose a problem a day every day (including the morning of his death), and his compositions were published daily in the Osaka Yomiuri for 40 years. That's an impressive achievement, considering that his problems were noted for being original, not rehashes of classical problems. 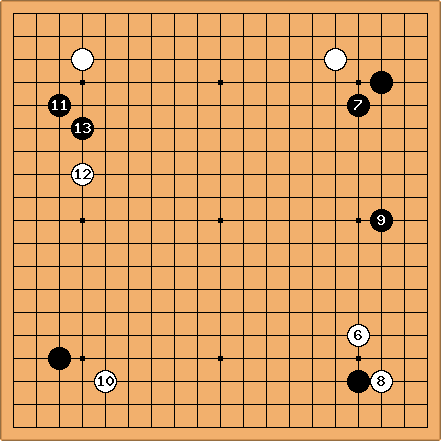 As was the norm with being a top player of his day he was approached to participate in a number of one-on-one, multi-game matches. Nearly all were sponsored by the newspapers of the time.

Hashimoto had a fast-paced, free-wheeling and confrontational go style. One pattern often seen in his games was his use of a light and fast-paced style to grab an early territorial lead. Then in the middle game he would skillfully make sabaki when he invaded his opponent's moyo. Known for "skillfully psyching out his opponents." [3]

Go reporter Akiyama Kenji? said, in an article about professional players post-game review styles, that Hashimoto was noted as being 'weak' at the post-game analysis, especially when he wins.

Hashimoto docilely agrees with whatever the opponent says  yes, if you'd played that way, I'd have lost. It is standard practice for the winner to be 'weaker' than the loser in the post-game analysis, but when it reaches this extreme, the opponent must lose his enthusiasm.[4]

Hashimoto composed many tsumego and edited several classic problem texts. The following is only a partial list.