This page describes an abandoned personal project, but I want to keep it here in case I return to study in the future.

Six years after I experienced the breakthrough to shodan I can really feel the improvement that should get me to something like 3-4 dan. The rank serves as a measurement only, because after all one should be able to apply newly learnt stuff in one's games. It is undeniable that a teacher lifts your level, but it must be a good teacher, or at least one that fits your needs and personality. Minue in my opinion is a great teacher. In the past I took a few lessons with Guo Juan. She too is very dedicated to her students. From her I remember the following learnings:

Another popular teacher is Alexandre Dinerchtein. He used to be the champion of trick plays before he went to study in Korea, where they urged him to unlearn that habit. Yet in his commentaries (and I assume hence in his teaching) he pays a lot of attention to new, tricky corner variations. It's the nature of the beast. I'd like to learn from him too: a mixture of styles will surely provide a rich development.

The bottom line: if you have a few bucks to spend, find yourself a teacher! If you like Go, having a teacher is definitely a way to fall in love! 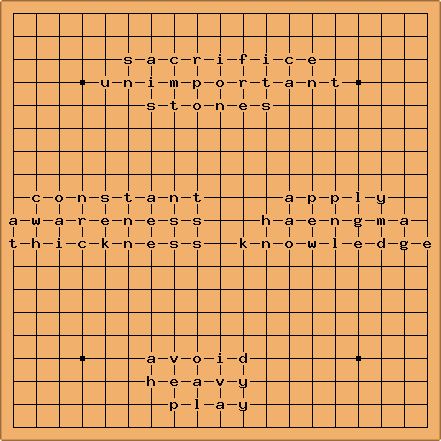