hard problem that I couldn't solve but when I looked at the solution actually was a fairly easy problem. So I thought I'd discuss it, to understand why easy things look difficult, or rather, how we make things difficult while they're easy. As so often, it is because we are not faithful to the fundamentals. 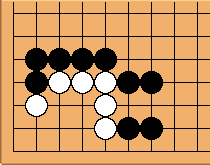 The fundamental approach to life and death is: 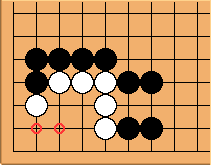 However, when trying to solve this problem, I was looking at the vital point(s) first. I couldn't cope with the ramifying variations and gave up. Here are three variations I read through in my mind. 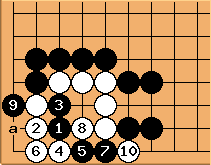 , a and playing at 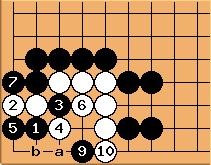 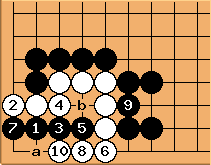 , the eyespace has grown very large and Black will either have to create a big nakade or an eye in the belly. This variation shows the latter option. If

at a creates an eye in the belly, White has enough outside liberties to atari at b.

The easy move didn't occur to me because I forgot the fundamentals of life and death. 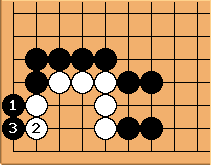 The easy move, the first move one needs to consider when trying to kill a group like this, is the hane, in this case the hane on the first line?. There are two places to hane here. The best hane is the one at the weakest side of the eyespace.

If White stretches, then the shape becomes a known shape: the door group. Problem solved at move 3! (ok, the corner makes the door group a bit peculiar but still easy). This gives us at least something to work with and explore variations. 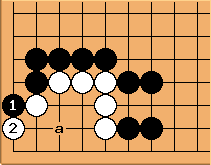 The first variation is when White counter hanes to keep the eye space as large as possible. A first line hane stone has done its work, reducing the eyespace, so it doesn't need to be saved. Now should we atari, on which side? or should we play the vital point a? Well, the fundamental approach tells it all but from here I will not further spoil the solution. Let me just apply the first fundamental once more: 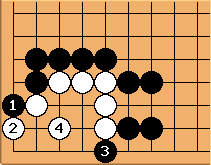 on the vital point and White is clearly alive. This hints that after

, it's about the vital point (or perhaps the cuts first?) and reducing the eye space is not key anymore. 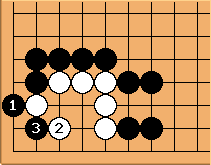 Incidentally, had White played the vital point at

is an easy kill. This is almost a no-brainer but you can see how rapidly a problem is pruned when reducing its complexity.