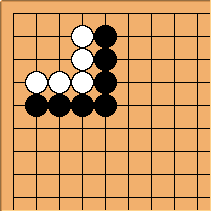 The carpenter's square is hard. For a shape that appears once in a while, it's not easy, not nearly as easy as the L-group, the door group or the comb formation. What makes it hard are 1) the non-intuitive defense moves, 2) that outside liberties matter, 3) that main line is ko 4) there's a weak version if it and 5) the presence of outside stones may help the defender. 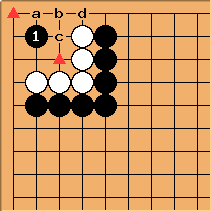 That being said, it's not as hard as it looks, if you analyze the position. 1) it's symmetrical, hence 2) the first move is obvious, and 3) the symmetrical defense moves don't need another thought.

Also the triangled answers can be discarded right away, leaving us with 4 answers to analyze. But first ... 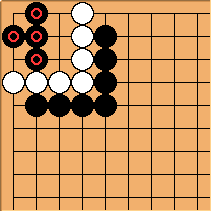 ... have a look at this position. If Black can get this shape into White's corner, then White is dead, because, all the internal liberties count for Black, who has an eye. And even if White were to capture the Black stones, then the resulting eye space is a farmer's hat. 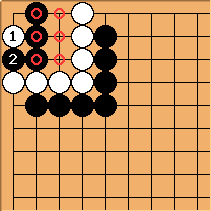 White would need to have 2 of the 3 internal liberties already occupied to capture Black. In this case, the resulting eye shape is a bent four, which is alive (it's not the proverbial bent four in the corner). 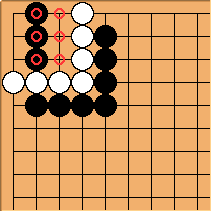 THis is also dead, provided at least 2 of the 3 marked points are empty. 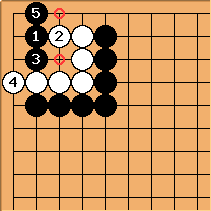 So, given the above,

makes the dead shape, having 2 of the circled liberties 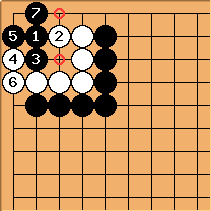 here doesn't help: Black makes the eye in the belly. 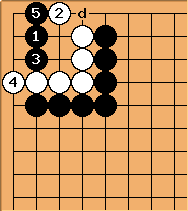 here or at d, results in the same issue. 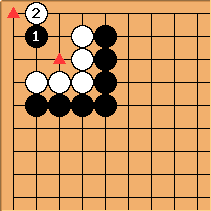 So the only possible answer for White is

here. We haven't done a lot of reading to arrive at this conclusion.

Although symmetry is broken, giving Black 9 options for his next move, we can exclude the triangled ones and reason some more about this shape.

Now that Black can't form an real eye in the belly, the eyespace becomes effectively large, so large that it's not easy for Black to create one. 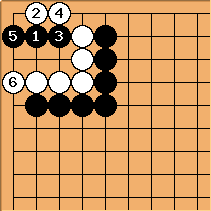 leave Black with a 7 point eye space to fill.

Even a 6 point eye space has only the rabbity six as a dead shape and Black can't form that one.

So, Black will probably have to reduce the eye space. We'll explore the outside hane first. 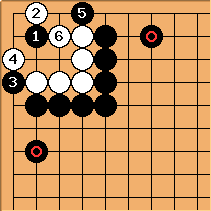 With supporting stones, Black can afford 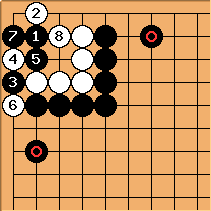 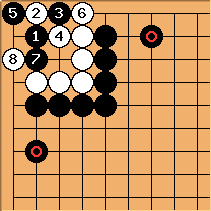 Path: <= Teaching Methods =>
Dieter Verhofstadt / The Carpenters Square Is Not As Hard As It Looks last edited by Dieter on May 10, 2022 - 10:34
RecentChanges · StartingPoints · About
Edit page ·Search · Related · Page info · Latest diff