A ko is called an approach ko if a player must make one or more approach moves in order to convert it into a direct ko; to win the approaching side must therefore ignore two or more ko threats. 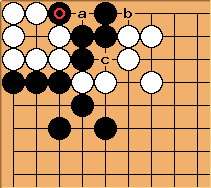 Black and White are involved in a ko fight at

↔ a. Black to play can end the ko and win the fight by capturing seven white stones, possibly ignoring a ko threat to do so. White, on the other hand, can not end it immediately. First she will have to fill a liberty at b (or c, but b is better), possibly ignoring a ko threat. The ko is now a regular, direct ko. Thus, White may have to ignore two threats to capture the four black stones.[3]

It is important to distinguish this type of ko from a ten-thousand-year ko, which also involves a kind of approach move.

Having to make extra moves means one must ignore two or more ko threats in order to win the fight, making it roughly twice as expensive; the details depend on the value of the threats and on whether finishing the ko is sente or gote. It also means that one must find more threats while ones opponent gets to retake the ko without a threat.

Ones chances of winning a ko of course diminish the more opposing threats one must ignore and the more threats one must oneself find.[4] A two-move approach ko can be considered a reasonable fight, but as the saying goes,

A three-move approach ko is no ko.

The count of an approach ko depends on the ko threat situation. (More on this kind of position at hyperactive.)

[1] The Japanese term for it is yose-ko; here yose indicates approach, not endgame.

[2] Robert Pauli: Instead of talking about a two-move approach ko, which does not say who has an advantage, I prefer to talk about a ko where, say, White owes two approaches. E.g. rather than "White will have to play at b" I would say "White owes an approach at b".

Contemplating about how to convince Robert Jasiek not to glue qualifiers to nouns (X-ko), I developed a new terminology:
If they fight a needs-one ko she owes the move, and he runs out of ko threats while she possesses exactly one, he'd be glad to find a needs-one ko threat.
However, then I discovered that "needs-one ko" is ambiguous, it could (at least) mean

[3] Robert Pauli: Well, you could as well say that Black has a ko threat for free . . . wrong. A free move enabled by a to-be-done approach gains points, a free threat does not, it only allows the retake.

[4] Robert Pauli: She might simply lose too much, as explained in the footnote above.