A cut is a move preventing a connection, or an existing situation where stones are prevented from connecting. Usually the term applies to stones which are in direct contact.

In the left part of this diagram, Black can connect his two stones at the marked point. In the right part it is shown how White cuts the stones, at

. The Black stones will only be able to connect again if the cutting stone is captured. 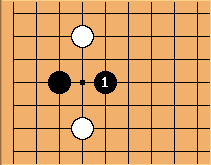 In this situation we will rather say that

separates the white stones. The implication on a strategic level is the same (the stones will not easily connect). On a tactical level,

needs not be captured for the white stones to connect . 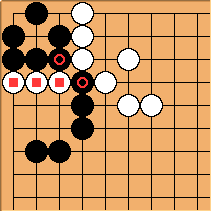 Because of the two

stones are cut off from the living white stones on the top edge.

Cutting and connecting is a central concept in Go. You are normally well advised to keep your own groups connected and cut your opponent's groups apart.

It is worth noting that cutting stones are often themselves separated from their group, so if you are cutting two groups to capture one of them, you must make sure that your cutting stones will not get captured first.

In a solid cut, Black cuts the White stones while connecting his own, resulting in a very favourable position where only White has the burden of being cut.

, the cutting stone, is itself cut from friendly stones. This more balanced kind of cut is called a crosscut.