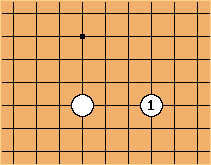 White's two stones are two spaces apart. The shape is more easily cut than a one space jump. It emphasizes rapid development over instant stability. 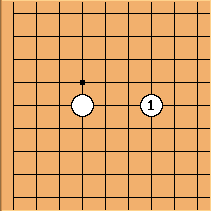 When the move is made towards the centre it is labeled a two space jump. Now there is no support from the side for connection. 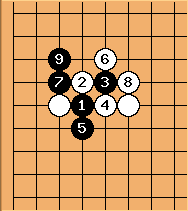 Here you can see how Black can cut, which he still will be more likely to do with support than without. White catches a stone in a ladder, while Black grabs the original white stone. This is why a two space jump is often used in hostile spheres of influence to sacrifice a stone. 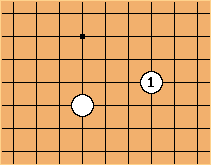 Uberdude I disagree that this is easier to cut, by not being on the same line when black cuts white will typically end up with better shape (e.g. existing stones become nobis not hanes so fewer cutting points) and can handle the following fight better. This is even more apparent when you consider a 3-space jump (easy to cut by plonking stone in middle) vs the extra large knight move (attach after plonking stone in middle has more connectivity). This idea that stones further apart in distance (both Manhattan and as crow flies) can actually be harder to cut is one of the interesting things about Go shapes :) 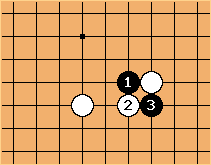 The basic technique of cutting a large knight's move in isolation is by attaching to one of the stones. Next there is a cross-cut with support (see later). 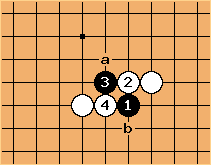 This is the bad way of cutting: a and b are now equivalent for connecting with a ladder capture.

On the side the large knight's move very often goes from the third to the fourth line, keeping balance between development and stabiity.

Cutting on the side with the mentioned technique is not possible.

However, it is possible to take away the eyespace of the white group, by playing

, White can play a double hane at a or stretch at b. Depending on the surrounding stones,

can become a succesful invasion.

The large knight's move in relation to one enemy stone 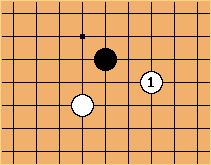 This move, when the black stone is on 3-4 is known to invite the taisha joseki. In general, there is one best way to cut the large knight apart. 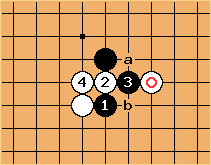 Black will choose where to connect and White will likely cut the other side, but his marked stone can be caught in a ladder. In the corner, the sides play an important tactical role, so there White's move is possible. In general this large knight move is aggressive and assumes a certain superiority in this area of the board (such as ladder breakers). 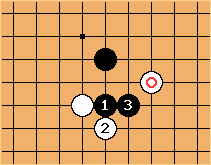 If White hanes at the outside,

is a very painful move, splitting White's hazama tobi of

in a natural way. 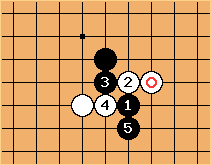 also cuts and results in a windmill formation. Given the fact that White will usually play the large knight in his favourable environment, creating such turmoil is likely bad for Black. 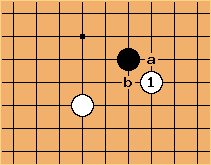 is more of a shoulder hit. As always against the diagonal check, Black can answer a (peaceful) or b (cut).