DieterVerhofstadt/Sense and nonsense of joseki

When discussing improvement many students come up with the topic of joseki. There is the proverb Learning joseki loses two stones strength, which means that, if you play standard sequences without really knowing what's going on, you become weaker because you are limiting your options and whenever someone deviates, you don't know how to punish it or by how much to punish it. Other people say that studying joseki (beyond memorizing) pays off because the more familiar the ground you are treading the less likely it is for you to make mistakes.

While I believe both are true to an extent, I have another reason to argue against focussing too much on joseki, not because of what it does to your game but because of the time it takes away from other elements of training, especially for relative beginners. Chiming in with the school against joseki study, I think one should play simple moves which have their own inherent logic. It is difficult to see how playing simple moves could altogether lead to a terrible result. They can surely lead to an inferior result but not by much.

I'll zoom in a number of joseki, in particular those who can lead to disaster, such as the large avalanche and the taisha. If you keep things simple, you can easily avoid those or come out with an acceptable result even if not optimal. 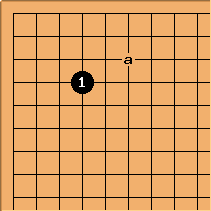 The 4-4 point is flexible and usually does not need development soon. It can expect an approach soon however, usually at a 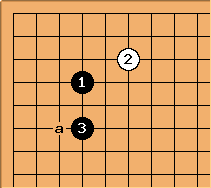 The basic answer when one direction of development is obstructed, is to take the other. The one space jump is the basic move for defence.

These days the answer at a is more popular, since Black will need a stabilizing move later, to avoid his moves to float around. This is essentially a sente argument and as such advanced. Black cannot fear disaster when playing this way. 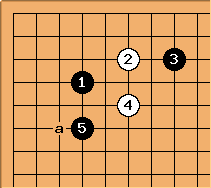 Black can also attack with a check at

. White splits Black's stones with a basic defensive jump and Black defends to avoid being surrounded. Again the argument for a holds. 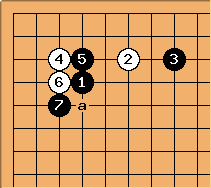 If White dodges the attack by sacrificing

, Black splits with the basic block of

. This is perhaps the only joseki move Black must learn: to play a instead (and why). 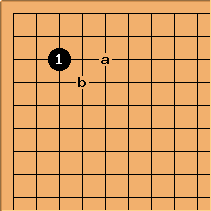 An underestimated starting move is 3-3, keeping things very simple by living on the spot. White has basic approaches at a or b. 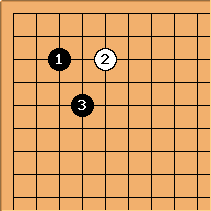 The keima is the basic reply to this approach and Black can't go wrong. 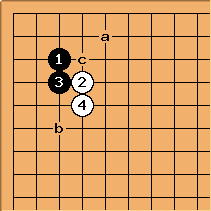 When White caps at

, Black must only make sure he isn't surrounded. The usual technique here is a but there is little wrong with the more mundane getting ahead at b or the turn at c. 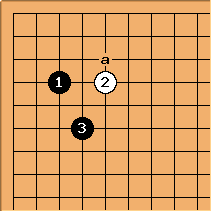 approaches, many players seem to think the attachment at a is the basic next move. No. It is an advanced move with sente in mind. The basic move is to develop in the free direction and apply some pressure on 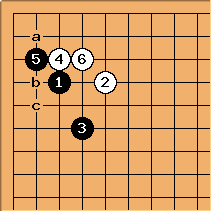 is another basic answer to an attachment. At

Black must make a decision. Taking the mutual vital point at a, defending at b or tenuki. The joseki move c is not easy to find but it is hard to see as well how White can punish Black if he doesn't play c. 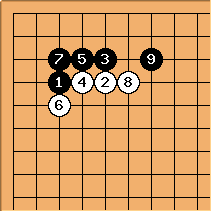 but even if Black plays this move and White tries to lure him into the avalanche,

is a quintessential move for connectivity and next

jumps to get ahead. 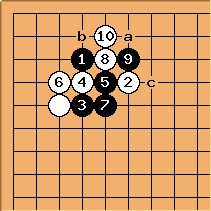 . Next, he forces up to the a-b exchange and takes the ladder at c.

The Magic Sword of Muramasa 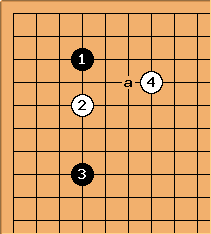 This complex joseki starts with these moves. There is a simple way to avoid it and that's to play 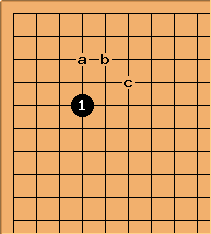 A personal favorite is the 5-4 point. White may enter at a or b and Black can play the basic pressing keima at c in both cases. White will now start clamping and crawling and Black only has to answer in the most basic of ways.

Isn't my game becoming dull this way? Eventually, yes. However, you have 5 corner moves to start with and none of them have to lead to trouble. You can decide to develop, keeping things simple or pincer, introducing some complexity. Simple variations alone, which can never lead to disastrous outcomes, probably amount to several hundreds already. There are many interesting games to play, coming off a bunch of dull standard corner patterns.

The focus on joseki for study purposes, as interesting as it may be, leads to a study of the particular at the expense of the general. I believe one must first truly grasp the basic development of stones before diving into this kind of study.