With modern endgame theory being developed and published by professionals like O Meien and Antti Tormanen, I've been reflecting on its practical use. For starters, let me discuss here the way I think about the endgame and apply these thoughts in actual games.

First, my definition of the endgame is:

the stage in the game where only border plays remain, i.e. 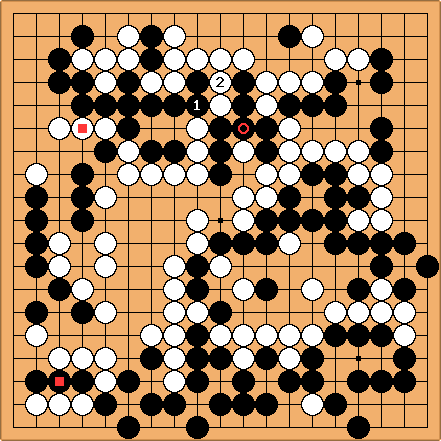 , Black has forced White to capture the circled chain, while in the sequence leading up to that, Black was still fighting for survival. Other places where 3 or more stones are dead, are marked with squares. Other major groups are alive.

There are no major territories to conquer, all are defined. The borders can still move up a few points in either direction. We say that "only border plays remain".

A border play can be of two different natures 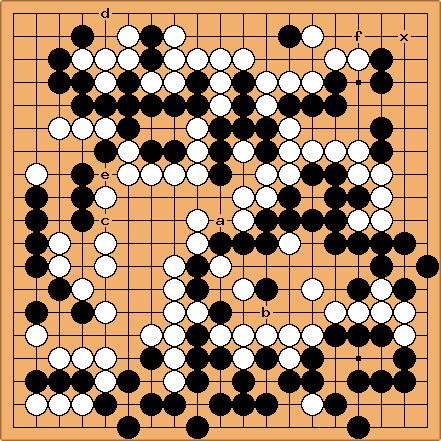 The more narrow definition for sente in the endgame is "a play that, if unanswered, gains more by following through, than it gains if answered". Although that may be more precise, I find it less helpful in order to determine in which order to play the moves. 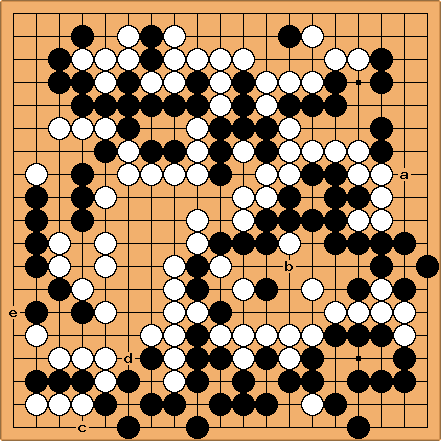 Later in the game, these captures and threats will become more significant and can be considered "disruptive".

The controversy caused by the term "sente"

This notion of "need (not) to respond" is controversial. The opponent always has a choice and even if responding locally seems necessary, it is not guaranteed to give the best result globally.

However, the notion is practical: a disruptive border play is likely to be answered and keep the initiative. On the other hand we know that a move which locally is likely to be responded to, may still be ignored in favor of a larger move elsewhere. 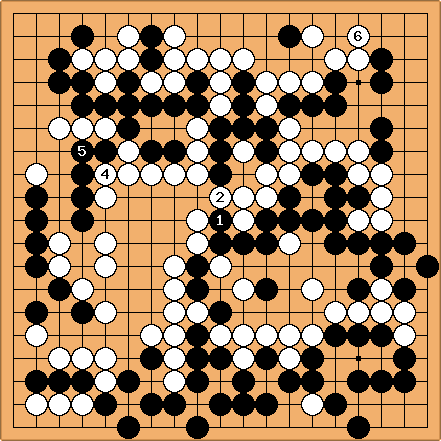 is the only real sente on the board, i.e. that single move which (gains a point and) will be answered.

Another such move, but still not as hot as

. Unlocking 3 stones would overhaul the territory and threaten the Black groups for life.

is so threatening that again Black only has

to postpone answering it.

Example: disruptive but not sente 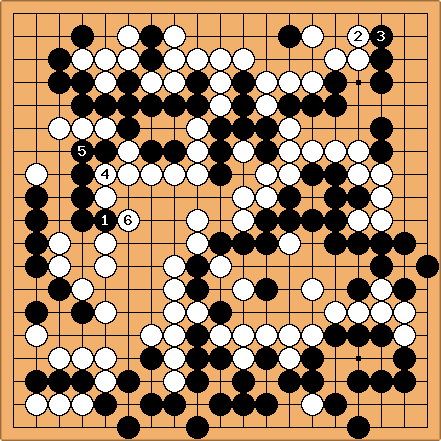 is disruptive in the sense that it threatens to destroy most of White's centre territory, WHite's move

really sente and White can return to answering

, since that has now become the largest move (protecting about 10 points), but first executes his own sente at

Now why would White play

and Black not play his own undisputable sente?

Because Black's move is a 1 point sente and nothing else. White's move include more uncertainty: what if Black plays there? Should White answer? What's the value of those moves? There is a high likelihood Black will play

himself if White omits it. Same for

Let's explore this some more

Now switch to the opponent's perspective who will use the same or a close-by point as a border play. We call this the "opponent's border play". Likewise, this can be a disruptive or non-disruptive one. This gives 4 combinations: 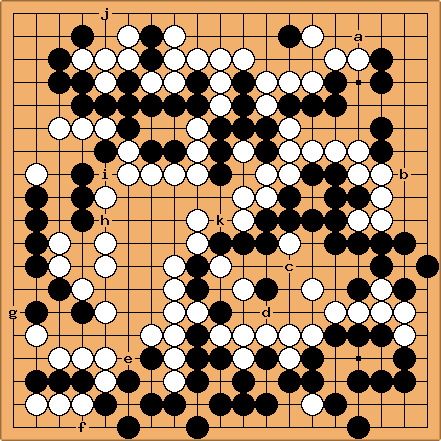 Again, it is controversial whether "double sente" can really exist and how it then came about. With this wording, there is no such controversy: both plays are disruptive but whether both need to be answered is not conclusive, indeed questionable.

a looks like double sente. It indeed threatens to disfigure the opponent's territory.

We can see this at work in diagram 4. If Black misjudges the need to answer

there and enters the centre, White may kill the corner.

Calculating the size of A

Let's first see what happens if Black plays first. After

, we draw borders at the square points, because it is equally likely for both to play there. Note that White will have to defend at a eventually.

We don't know how many points Black has made here but with some foreknowledge we can say he made the 6 circled points. 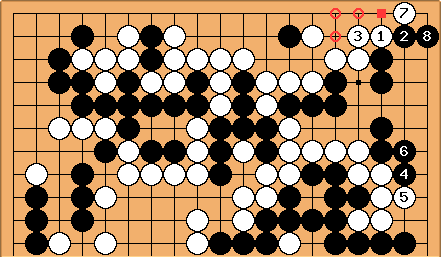 Suppose Black leaves the situation after

and for the sake of the argument, secures his corner by playing the big gote of

, then White makes another exchange

which is surely sente. In comparison with Black first, White has made the 3 circled points, while Black's 6 points are indeed gone (Black will need to protect the cut). 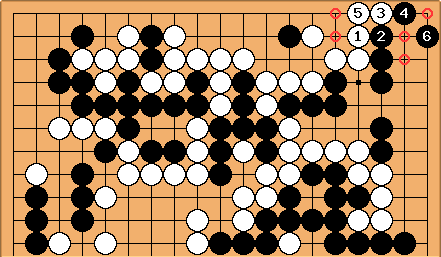 , then White makes 2 points compared to Black first, while Black keeps 3 of his original points, losing 3. The swing value is 5 but the tally is 1 ans so the size of the move is 5.

Calculating the size of F

, Black executes a force to capture? with

. Next a has some value (White can only destroy a point by destroying his own).

Let's count this as the zero position.

turns all of the 6 circled points into territory, compared to Black first. Also White is slightly more likely to get b than Black, so we count it as 7 points.

Calculating the size of B 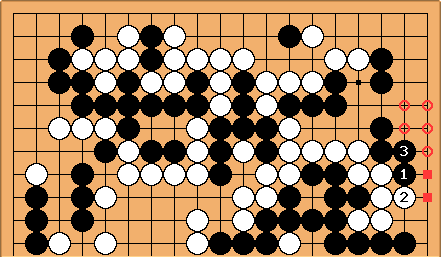 Again with foresight, Black makes the 5 circled points. White nothing. 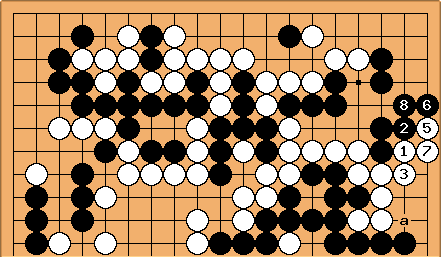 makes 2-3 points for White, IF she gets a, which is a 50-50 chance, so let's say >1 point. Later she executes the sente sequence which is her prerogative, to destroy all point Black made when he'd go first.

Calculating the size of C

Black makes 2 points. (the 2-3 exchange is White's prerogative). Later, Black has a sente move at a.

saves the stone but also threatens a, which makes an additional 7 points.

Calculating the size of G

makes the 2 circled points. Later, Black has a sente sequence

is White's prerogative. Overall we count this as 2 Black points.

Calculating the size of I 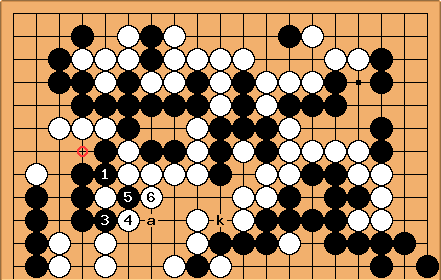 makes the circled point, captures a stone and will eventually force White to play a. It leaves a ko worth -1/3 for Black. The reference score here is 2-1/3 = 5/3 for Black. 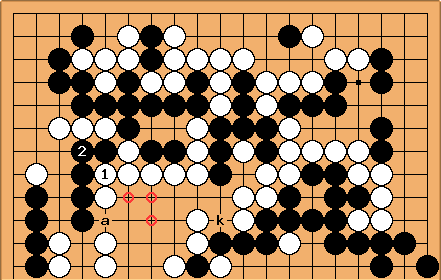 Summary of how to play

In the endgame, sente seems to have the following meanings, concentrically:

I find it instructive to think about these three categories with different terms and I tend to remove "sente" from the wording, since that term has such a strong sense of "keeping the initiative", which is in fact only guaranteed with the dominant move. Using "sente" for disruptive border plays and border plays with higher follower, may mislead players into thinking they have to answer these moves, or put them off guard if their alleged sente is locally unanswered.

The word I like best for the superset of these moves, as an alternative for "sente", is "prerogative". The above categories then become "dominant move", "disruptive border play" and "prerogative". A reverse sente is a "forestalling move".

In that position, it's Black's turn.

In the end it's all about the value of a move. A 1 point sente, even if it's the dominant move, can be played at will, because the opponent is unlikely to forestall it. Keeping it in reserve as a ko threat is proper gamesmanship. A 4,67 sente should be played much sooner.